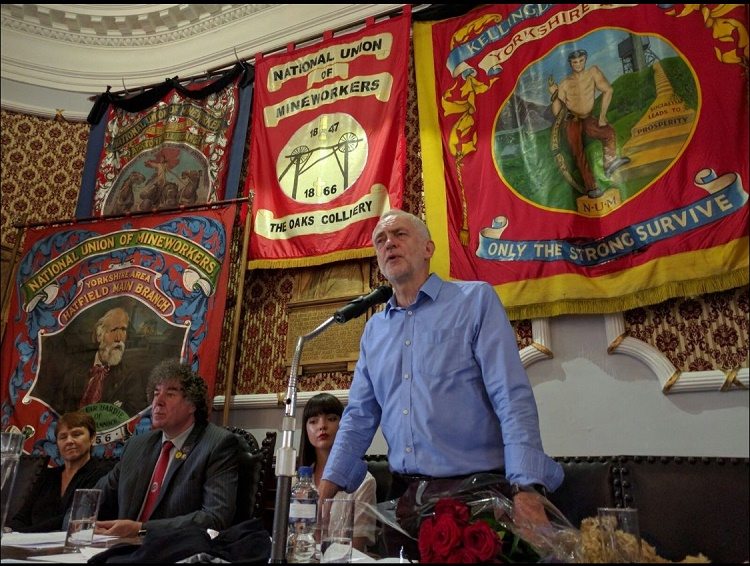 Jeremy Corbyn made history on Tuesday 27 September, by coming out in support of one, much-maligned group of workers. The Mirror reported that the Labour leader sent a message of support to a rally of ex-miners, gathered for the party conference in Liverpool. And breaking with previous leaders’ form, he backed their campaign over stolen pension money. He is the first leader ever to do so.

While Corbyn has always supported the National Union of Miners and the fight for justice for victims of Orgreave, this move is unprecedented. Apparently, Corbyn would have attended the rally, if it not had been for London Mayor Sadiq Khan’s speech at the conference.

No rest, even in retirement

As The Canary previously reported, the miners’ strike of 1984/5 is a well-documented event; one of the most recognisable of the Thatcher era. But what is less talked about is the miners’ pension scheme. Or most notably, the fact that successive governments have funnelled money, to the tune of £8bn, out of the scheme while leaving many miners destitute.

After the privatisation of British Coal in 1994, the then Conservative government agreed to underwrite the miners’ pensions scheme in order to protect it. The deal was that the scheme would track the rate of inflation, and rise accordingly. But in return, the government would take half of any extra cash that was generated (surplus). At the time, with the industry on the brink of collapse, the miners were faced with a stark choice. They chose, naturally, to protect their pensions.

But as Michael Newton, from the UK Mineworkers Pension Association (UMPA), said in 2015, the only people to benefit have been successive governments:

In real terms our pensions have been slashed in half by successive governments. We have been financially penalised all the way to the grave. In 1987 they took a ’pensions holiday’ and British Coal and the Government stopped paying some £870 million for three years. There were more pension holidays in 1991 and 1994. They creamed off a surplus of over £5 billion [during that time].

In 2003, a miner’s pension was worth around £41.50 a week, though some older men got as little as £10 a week. In contrast, the assets of the two funds at the time were around £20bn. When the pension fund performs well, so does the Treasury. But because of the way the money is arranged, the same can be said of it in bad times. Because the half that the Treasury takes is paid in instalments, it sits in the pension scheme’s bank, therefore accruing additional interest, so the Treasury makes even more. For the government, it’s a win-win situation.

By 2008, the government had made over £3.5bn out of the pensions scheme. But as The Telegraph reported, the money the government was taking did, in fact, not actually exist. They were making ‘guesstimates’ about how much extra money should be in the miners’ pension fund, and then pocketing it accordingly. And it pocketed well. As Energy Minister Andrea Leadsom told parliament this June:

the total gross payments to the Treasury would be £8bn. This would have been both gross of any payments from the Government and also in cash terms i.e. allowing for the returns achieved on the funds before payment.

Over the period 1997 to 2015 there have not been any payments from HM Government as a result of the guarantee of the benefits on the MineWorkers Pension Scheme. Therefore, during this period the guarantee has not directly ‘cost’ the government anything.

Previous attempts to get the scheme changed, with successive governments, have failed. But the UMPA is not giving up. Peter Stefanovic, a high profile lawyer who has come out in support of their case, told The Canary:

Putting this into context, over the same period the Government spent over £124bn bailing out greedy and incompetent bankers with loan and share purchases. We are talking about duping and robbing generations of working men. Even Dick Turpin had the decency to wear a mask.

Since the strike in 1984/5, miners have been treated appallingly by successive governments. The last deep coal pit, Kellingley Colliery, closed in December 2015. Miners have been demonised, vilified, seen their industry decimated and now, even in retirement, they cannot lead comfortable lives.

But Corbyn’s unprecedented support may well prove to be a game changer. With the Labour leadership behind their campaign, and therefore a louder voice in parliament, the current Conservative government may start to listen. And it should, because this scandal has been ongoing for nearly 25 years. The sooner the miners get a fair deal over their pensions, the better.

– Sign the petition in support of the Mineworkers Pension Fight.

– Attend the rally in Liverpool on 27 September, if you can.

– Read more about the miners’ case.