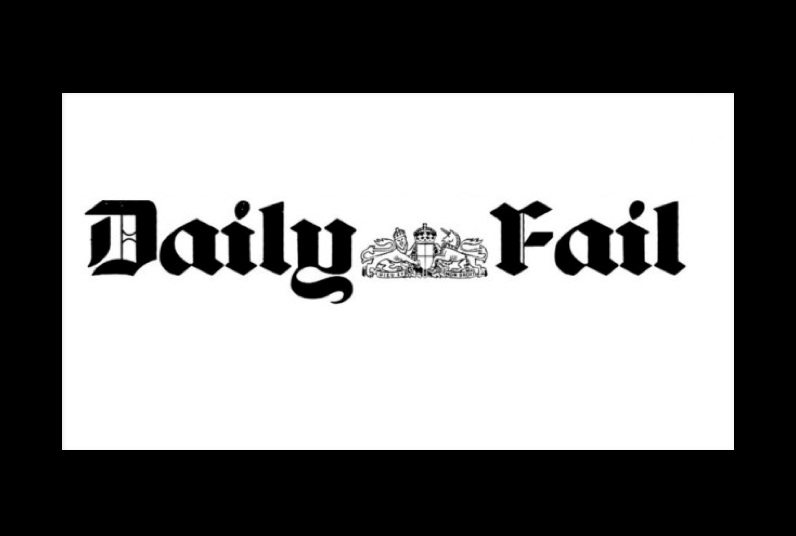 On 24 September, The Daily Mail published a front page that screamed: PATIENTS AT RISK FROM EU DOCTORS. Now, a doctor has responded, and his response is going viral.

Neil Tiwari wrote the Facebook post Dear Daily Mail, Enough is Enough after reading the article, and it has now been shared over 18,000 times.

The gist of the Mail article, which was front-page news, is that due to EU laws on freedom of movement, doctors cannot be tested on their medical competency. If they have had the same level of training as a UK doctor, their qualification has to be presumed to be equivalent.

In typical Mail style, this was translated into “patients are at risk from thousands of EU medics”, and into claims in bold print that “EU doctors are twice as likely to be struck off than those from the UK”. You have to read to the end of the article to make sense of these statistics, where it finally tells you that 1.01% of EU doctors have been struck off, compared to 0.55% of UK qualifying doctors, from 2011-2015.

Yes, that’s 1.01% of 30,500 EU doctors. Hardly the percentages that should lead to scaremongering headlines of risk from thousands. 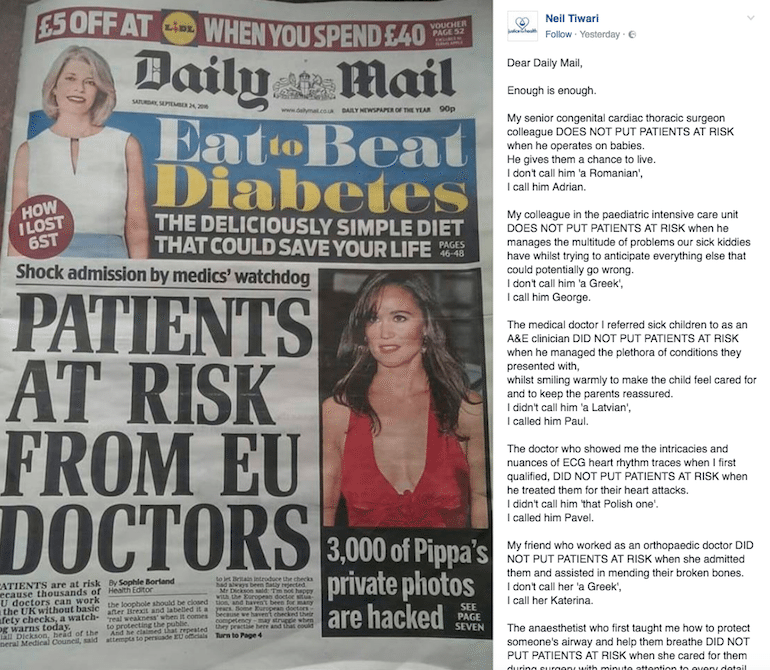 My senior congenital cardiac thoracic surgeon colleague DOES NOT PUT PATIENTS AT RISK when he operates on babies.
He gives them a chance to live.
I don’t call him ‘a Romanian’,
I call him Adrian.

My colleague in the paediatric intensive care unit DOES NOT PUT PATIENTS AT RISK when he manages the multitude of problems our sick kiddies have whilst trying to anticipate everything else that could potentially go wrong.
I don’t call him ‘a Greek’,
I call him George.

The medical doctor I referred sick children to as an A&E clinician DID NOT PUT PATIENTS AT RISK when he managed the plethora of conditions they presented with,
whilst smiling warmly to make the child feel cared for and to keep the parents reassured.
I didn’t call him ‘a Latvian’,
I called him Paul.

The doctor who showed me the intricacies and nuances of ECG heart rhythm traces when I first qualified, DID NOT PUT PATIENTS AT RISK when he treated them for their heart attacks.
I didn’t call him ‘that Polish one’.
I called him Pavel.

My friend who worked as an orthopaedic doctor DID NOT PUT PATIENTS AT RISK when she admitted them and assisted in mending their broken bones.
I don’t call her ‘a Greek’,
I call her Katerina.

The anaesthetist who first taught me how to protect someone’s airway and help them breathe DID NOT PUT PATIENTS AT RISK when she cared for them during surgery with minute attention to every detail of their physiology.
I didn’t call her ‘that French one’.
I called her Francoise.

He goes on to rip apart the fear and division that The Mail is trying to cause with this type of article:

You seek to foster division, engender distrust and cultivate fear of my friends and colleagues based on their nationality.
You do this whilst wilfully blinding others to the vital, invaluable service these people provide every damn day up and down the country and shielding the wealth of evidence regarding it from the public.

I won’t allow that to happen.

My colleagues and I will not allow that to happen, because these people matter to us and we won’t see them dragged through the mud.

Nor will we allow the work and value of the thousands of amazing nurses, health care workers, theatre staff or other allied healthcare professionals of EU and foreign origin to be undermined in such a callous and bigoted way.

This is yet another example of shoddy journalism from The Mail based on racism, xenophobia and prejudice. Not only is it shoddy, it is designed to instil fear and distrust of the many thousands of dedicated professionals from other countries who keep our NHS running.

Every day, there are more horrific examples of hate crimes. Following the Brexit vote, there has been a 57% rise in reported hate crimes. This environment has been fuelled by screaming headlines and scaremongering from the press.

But Tiwari’s response is perfect. It personalises the attacks. It shows the real people behind the headlines; the real people who save lives and help others on a daily basis. And it shows these people that they are not alone, and that we will stand with them against the xenophobic hate peddled by The Daily Mail.