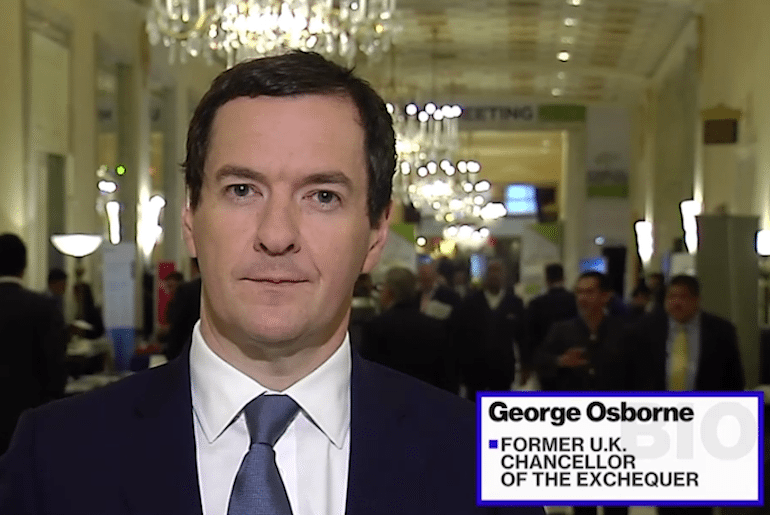 In an interview published by Bloomberg on 27 September, former Chancellor of the Exchequer George Osborne admitted his policies had created inequality and “anger”. Speaking from Washington DC, where Osborne now makes large sums of money giving after-dinner speeches, he made several startling admissions.

The former chancellor was asked if he thought now was an appropriate time to stimulate the UK economy, through investment. Osborne reaffirmed his support for the HS2 rail link and other expensive, high-profile projects:

The discussion then moved on to ‘quantitative easing’ (QE), in which a central bank like the Bank of England creates money electronically and passes it on directly (usually to large financial institutions). Of the effects of QE, Osborne said:

We have got to work hard and I fully accept that we didn’t do this enough before the referendum, in making sure that communities that feel economically insecure or feel that the system in its broadest sense is not working for them, have a better outcome… we do need to ensure that the rewards are more widely shared.

It’s important that people who work in a capitalist system see the rewards of that work… We also need to offset the very necessary loose monetary policy and the distributional consequences it’s having, essentially, you know, it makes the rich richer and makes life difficult for ordinary savers.

Osborne’s acknowledgements, amounting to a mea culpa for the UK’s enormous inequality problem and personal debt levels, stand in stark contrast to those he made during 6 years as chancellor. An advocate for and proponent of QE, he even repeatedly claimed it would help regular British families. Now out of the job and faced with an undeniable record of failure, he has performed a public climb-down.

With the confessional in full swing, Osborne concluded by seeming to acknowledge the anger created by his own policies.

I think all of us who believe in free markets, in our democratic institutions, need to work harder to find an answer to the anger that people clearly feel out there and to make sure that anger is not simply echoed back to them by the social media that they consume. And it’s a huge challenge for all of our democracies.

You can watch Osborne’s comments on austerity here (from 7 minutes 30 seconds):

The reality is that QE, along with many other dominant economic policies, stems from a fundamental misunderstanding of how money is created. 97% of the UK money supply is generated by bank loans, as debt, while just 3% is created centrally, by the government. Debt, therefore, is the motor of the economy, and money is a privatised industry.

Addressing this is essential. Passing the power to create money to a democratic, transparent body working in the public interest, as opposed to financial institutions working in their own interests, should be the number one economic policy of any progressive government. Without that, banks will always be in charge.

– Learn more about UK money creation and how it should be reformed here.

– Support The Canary here, so we can continue bringing you the news that matters.