I went undercover at the Labour Party conference, and what I saw left me speechless [IMAGES] - The Canary 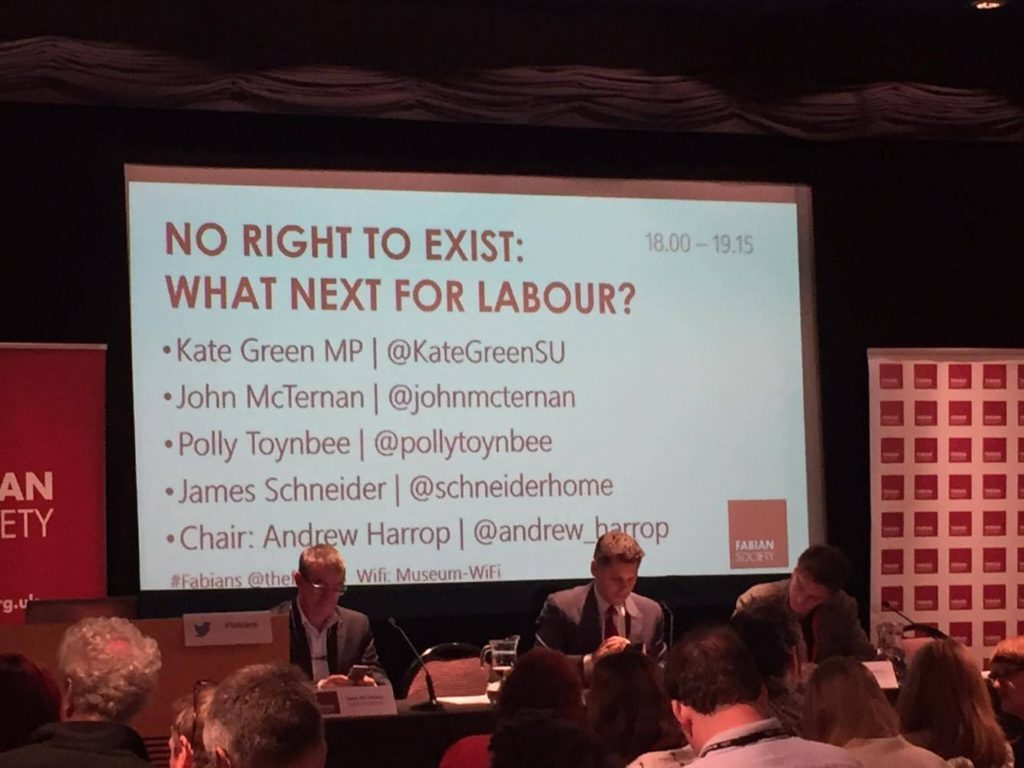 If anyone was under the misapprehension that the Labour coup ended with the resounding victory of Jeremy Corbyn, they should think again. The Bitterites of the party are only more bitter, and this session at the fringes of the Labour Party conference in Liverpool demonstrated it in glorious technicolour.

On the outside looking in

It felt like going into the belly of the beast. The Fabian Society fringe event was held at Liverpool’s Merseyside Maritime Museum this week. I wandered in and snuck over to a seat at the back, as inconspicuously as a brown woman with a mohawk can in a room that looked like a Moss Bros just exploded. It was row after row of people that looked remarkably alike: mostly male, mostly white, mostly in the same cut of navy suit, with hair slightly too neat – as if they’d just been taken out of the packet and placed there. And of course, not a regional accent of any kind.

I didn’t hold high hopes for a conciliatory tone at the event. First, it was entitled ‘No right to exist’, and asked: is the Labour Party over? Second, its panellists included John McTernan (a troll-like figure responsible for Labour’s obliteration in Scotland) and Polly Toynbee (The Guardian‘s resident Whinger-in-Chief). Third, on my way in, I overheard two of the men in navy suits bemoaning the fact that there were “so many of these new members around”. And a middle-aged woman complained in a plummy accent that it felt like a return to the 1980s with all these northerners about the place, and that she couldn’t understand half of what they were saying.

A group of suits, meanwhile, sat making jokes about former journalist Paul Mason for leaving Channel 4 to pursue campaigning journalism, saying he had “been radicalised in Greece” and was now “a nasty piece of work”.

With the suits, the grim faces, and the joylessly excessive drinking, it felt like a funeral wake for neoliberalism.

A lesson on trust

The host opened the event by reminding the room of the Fabian Society’s tradition of comradeship even in disagreement, and to avoid making political disagreements personal. Sadly, this wasn’t upheld for very long by the panellists or the audience.

Labour MP Kate Green, who worked on Owen Smith’s failed Labour leadership campaign, was first to speak from the panel. She told the room that the Labour Party isn’t trusted anymore, without explaining why – seemingly attributing this lapse of trust to the arrival of Jeremy Corbyn. Which is strange, because if you ask most people why they don’t trust Labour, they will respond with one of the following:

All of which are the responsibility of Kate Green and the Parliamentary Labour Party that stands to the right of Jeremy Corbyn, his front bench, 84% of Constituency Labour Parties, and at least 61.8% (given the extent of the purge, we may never know the real percentage) of Labour members and supporters.

A lesson on winning votes

Green also stated that, to win the next election, “we need to attract Tory voters back to Labour”. But this isn’t actually true. At the last election, just 24% of the electorate voted Conservative, while 76% didn’t. Corbyn could win the next election by building a movement, and gather his votes from the 76%. Indeed, that is his strategy. Not only does this mean a campaign based on political courage and mass engagement, but it has the added bonus of actually enhancing our democracy by increasing the mandate of his government.

It’s working, too. The surge in membership since Corbyn’s arrival means the Labour Party now has the largest membership of any political party in Europe, at well over half a million. Those members are going to be speaking to their friends, their colleagues, their families, and getting the vote out for Labour. Not to mention their monthly payments to the party which give it real financial clout to fight the next election.

These points were touched upon by the next panellist, James Schneider from Momentum. But he faced a tough crowd. There was barely a ripple of polite applause as he called for the party to come together around the new ideas, and become a party of the many, not the few.

Next up was Toynbee, who opened by warning, correctly, that Theresa May is to the political right of David Cameron, just as Cameron was to the right of Thatcher. She gave a withering assessment of the ‘Brexit Triad’ of David Davis, Boris Johnson and Liam Fox, claiming that Theresa May was treating them like a bunch of naughty schoolboys. She then claimed that: “Labour must become the party of the 48%” – meaning the party of those who wanted to remain in the EU. This got enthusiastic applause in the room, but what about the other 52%? The answer, from Toynbee and the next panellist was: we tell them they’re wrong.

The words of an electoral expert?

Next up was John McTernan, political strategist for the 2015 Scottish Labour campaign, which saw the party lose 40 of its 41 seats in Scotland overnight last May. With zero irony, McTernan continues to be granted a platform by the mainstream media to speak as an expert on electoral strategy. Earlier in the day, he’d tweeted about how pleasant his visit to the Momentum fringe event was:

But he had a different message for the Fabian audience.

McTernan opened by claiming he’d been on the end of abuse at the Momentum event. Stating “I am not a Tory’, he claimed that Momentum supporters had accosted him and branded him a Conservative. But when McTernan actually broke into his speech, he sounded remarkably like, well, a Conservative.

First, he made a joke which got huge laughs in the room, saying: “Labour loses the 2015 general election, and these people think we lost because we weren’t left enough!” He went on to demand of Labour: “Let’s choose London! Let’s choose the Financial Services sector! We shouldn’t get sidelined by fringe issues.”

McTernan finished his contribution by demanding that people remember that “Labour must stand for something”, to which an audience member replied: “What do you stand for Mr McTernan, which isn’t a Tory policy?”

McTernan’s central premise, that Labour lost the last two general elections because it was too left-wing, flies in the face of the facts. In the pre-Corbyn years, Labour fell over itself to appeal to the right. We had Rachel Reeves saying she’d be “tougher than the Tories” on welfare. The party tried to go anti-immigration, going so far as to print these god-awful mugs: 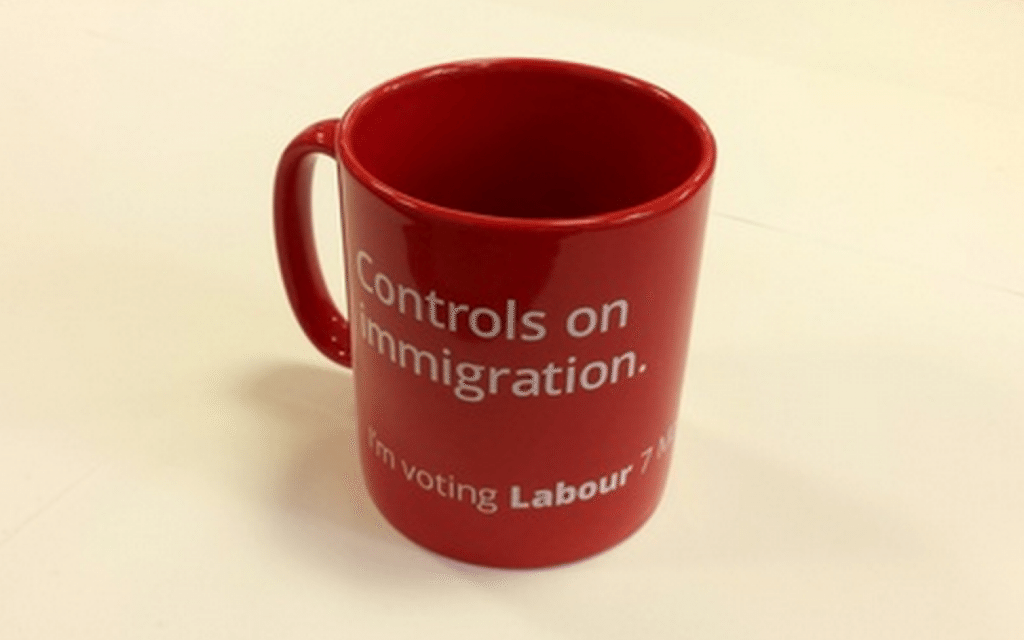 The majority of Labour MPs (funnily enough, almost exactly the same ones who voted no confidence in Jeremy Corbyn) abstained on the Tory welfare bill that cut a further £12bn from the welfare budget, and backed ideological austerity. Miliband’s Labour also repackaged the Tory line of ‘strivers vs skivers’. None of it worked. Labour lost in 2010. It lost in 2015. And it got run out of Scotland by the SNP.

Why? Because, as multiple studies have shown, people want an actual opposition. A 2013 YouGov study warned the party that the public was far to its left on a number of issues, and felt abandoned. A University of Oxford study after the election, meanwhile, revealed that Labour’s failure to counter the Conservative narrative (too much welfare, too much public spending) on the root causes of the financial crisis – which they could only have done by challenging austerity, the financial services sector, and neoclassical economics (as Corbyn’s team have) – was the prime reason for their failure.

The questions and comments section of the session started badly and got worse. A man continued to interrupt with criticisms of the right-wing panellists, which got a hostile reaction from the suits in the crowd. Then, when James Schneider of Momentum was asked if he was planning deselections for the coup MPs, and replied no, a member of the audience shouted “Liar!”

The panellists (apart from Schneider) were united in their agreement that Labour has no future with Jeremy Corbyn as leader, or with providing the country a left-wing alternative to the current government. They vowed to continue their battle, but through the same almost Orwellian terminology we have seen elsewhere from Yvette Cooper, Chuka Umunna, and other key members of the coup throughout the conference. They call for unity, democracy, and for broadening the party rather than shrinking it. But they do the exact opposite. Jeremy Corbyn offers them shadow cabinet positions, and they attempt to topple him anti-democratically, first through a mass resignation, then by a vote of no confidence, and later by attempting to keep him off the ballot of the leadership election. Corbyn doubles the party membership, and they conduct a mass purge of Labour members, disenfranchising people they feared would vote for him. Corbyn appeals for calm, and they conduct a smear campaign in the media in which they brand Corbyn and his supporters as terrorist sympathisers, thugs, misogynists, and antisemites. And the mainstream media somehow continues to brand these people as the ‘moderates’ within the party.

But their opponents should take heart. The coup will trundle on, because it has nowhere else to go, even though it is entirely lacking in vision, values, and leadership. It is, as Hillary Clinton might put it, a “basket of deplorables“. Bitter, angry, determined to burn the house down rather than share it with anyone else.

By contrast, the scenes coming from the Momentum fringe event, and the conference speeches of Corbyn, McDonnell and the front bench, showed an exciting return of humanity and energy to Labour politics. Courage, creativity, values, and a focus on developing alternative ways of doing things that will make the country (and the world) a fairer, more prosperous place. By doing this, the left of the Labour Party positions itself as the future, and its opponents as a tired shadow of the past.