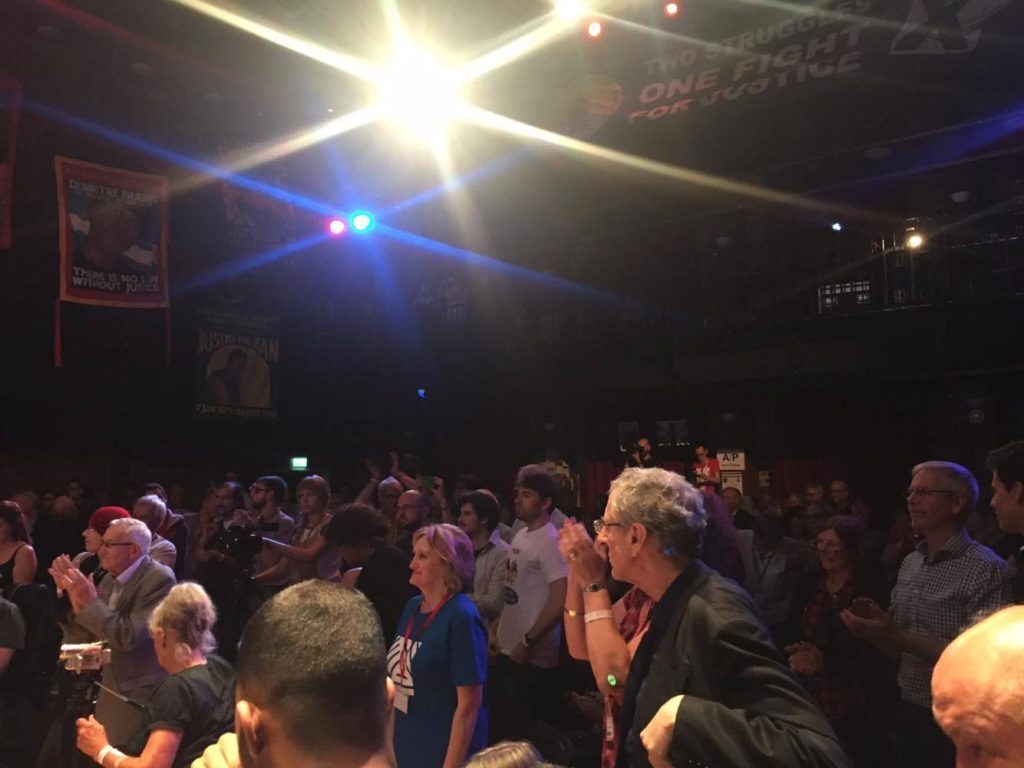 There’s an incredible story that the mainstream media is refusing to tell about the Labour Party conference, and it’s that the real event was held a 10-minute walk away at the Momentum fringe event called The Transformed World 2016. If you’re feeling like the country’s gone to the dogs and are desperate to hear people coming up with creative and courageous plans to make things better, you need to read this.

While much of the mainstream media focus about the conference centred on the rabble of Bitterites determined to burn the house down rather than share it with actual left-wingers, up the road at Liverpool’s Black-E centre, many of those purged from the party and not permitted entry to the conference were talking about the things that really mattered. Jobs, homes, energy, the environment, science and technology, the economy, our place on the international stage.

Two talks in particular stuck out for me. One focused on resolving the key issue behind our failed economy. The other was an inspiring tale of a community that refused to wait and rebuilt its economy together.

The working-class estate that rebuilt its own economy

The Marsh Farm estate in Luton was one of the most deprived estates in the south-east. One in five of its young people were classed as NEET (not in employment, education or training), while drugs and violence were rife. As Glenn Jenkins of Marsh Farm Outreach puts it: “we were the forgotten people”.

The estate built a coalition of residents, the local council, and community organisations, and it set about rebuilding its own local economy from the ground up.

How? First, they took a census. They knocked on doors and researched how much each of the estate’s 3,200 households (over 10,000 people) earned each year, how much they spent, and what they spent it on. When they completed their task, Jenkins said:

We realised we weren’t as poor as we thought we were. But all of our income was being spent outside of our local economy. We demonstrated this to the community by filling a barrel with water, then poking loads of holes in it. That’s what our economy looked like. So we wanted to get that water back in the barrel.

They came up with a radical idea. What if, instead of spending £1m a year on fast food, and another £1m on mechanics, and other spending outside, they set up local co-operatives on the estate which delivered those services? That’s what they did, and they created 70 jobs for those young and older people who were previously jobless.

They built a community centre on the estate, and held it like a parliament. A place where the community comes together to discuss the problems the estate faces, and to develop its own solutions. One example would be litter and fly-tipping. The estate was dirty and messy, and different government agencies seemed to spend more time arguing over whose jurisdiction the issue was than actually dealing with it. So Marsh Farm is now planning to have its own refuse collection and environmental task force. It will employ local people to do the job, who care about their estate being clean, safe and tidy. They will save the council money because they don’t have a profit motive; they just want to pay the workers a decent wage and get on with the job.

As a result, their estate is cleaner, safer, and residents know each other and work together to resolve their own problems. In doing so, they gain not only self-esteem, but things just work better. Jenkins says: “Democracy is something you learn by doing it. This is what’s happening at Marsh Farm.”

Is every problem solved? No. The community is in the process of rebuilding something that took decades to break apart, but they are equipping themselves with the tools to complete the task. They are lobbying the Labour Party to ensure that, under the next Labour government, their process is piloted on sink estates across the country. A reminder that this is not the 1980s-style state socialism derided by the Blairites and the media – it is about creating self-reliance and community by devolving power from the state to the local level for real, and equipping people with the tools to help themselves.

From the bottom-up solutions of Marsh Farm, Fran Boait of Positive Money laid out a crisis stemming from the top. Money. You use money all the time, and it will preoccupy much of your time, too. Do I have enough? Can I pay this or that bill? What about financial security in old age? How will our kids buy a home?

But too few people know how money is created, who creates it, for what purpose, and how that impacts us all in a very real way, every day of our lives. Boait walked through the history of money, created as a tool, a way for people to exchange goods and services. We started with a barter system, but as our communities grew larger, we moved to currency in the form of precious metals, and banks were invented to hold those currencies in a safe place. Eventually, the banks started handing out IOUs based on the precious metals in their vaults, creating notes and coins. Later, they realised they could actually print way more IOUs than there was precious metal in the vaults and fiat currency came about – that is, notes and coins backed by nothing but the public trust in banks.

But today, just 3% of the money in our economy is the notes and coins printed by the Bank of England on behalf of the state. The other 97%? It’s just numbers in computers, created by commercial banks through loans – and the vast majority of this isn’t going to small businesses, inventors, science and technology, or our public services – it’s going into the financial services sector and property. Worse, the property element isn’t going on an expanding home-owning class (home ownership has been in decline for two decades). It’s going to buy-to-let landlords and property speculators, meaning astronomical rises in the prices of homes, and rent.

This, coupled with an austerity programme by the Conservative government which actually cuts demand – people losing their jobs, wages and job security are less likely to spend – means another hit for the real economy. Bottom line, if we don’t fix our dysfunctional banking system, we’re just bailing the water out of a sinking ship rather than actually building a ship that’s seaworthy.

So what to do? Positive Money and a growing number of economists agree. Ultimately, you remove the power of commercial banks to create money from nothing. Money creation should be transparent and democratic, and delivered by a truly public institution.

In the short term, we would implement the idea backed by Labour of People’s Quantitative Easing. So far, the government has pumped £350bn (and another £70bn signed off in August) into the financial services sector, effectively printing money for them for free. None of this has trickled down. A wide array of experts, the Labour Party, and Positive Money all agree – making such a cash injection into the real economy through a National Infrastructure Bank would pay far greater dividends in jobs, wages, the development of goods and services, and a reduction in personal debt and dependency.

In short, we move from an economy which is directed (from the very creation of the money in it) towards a type of behaviour which sucks wealth and productivity out of the real economy, to one which does the opposite.

In just two workshops out of the dozens held over the three-day fringe event, there were real, tangible, workable solutions to the problems being faced by Britain and the world – and both were about increasing democracy, empowering people to help themselves, and working together to face our challenges head on. No tinkering, no bailouts, no old-fashioned tax and spend. All delivered in a common-sense language that the diverse attendees – from PhD-educated people to those who barely made it through school – could understand and engage with powerfully. The World Transformed 2016 felt like a Labour Party conference should feel: a friendly open space where people create a world that works for everyone.

– You can see more on The World Transformed 2016 here.

– You can check out Positive Money here.

– You can find out more about Marsh Farm Estate here.