Some genius turned Donald Trump's debate meltdown into a Mary Poppins classic, and it's brilliant [VIDEO] - The Canary 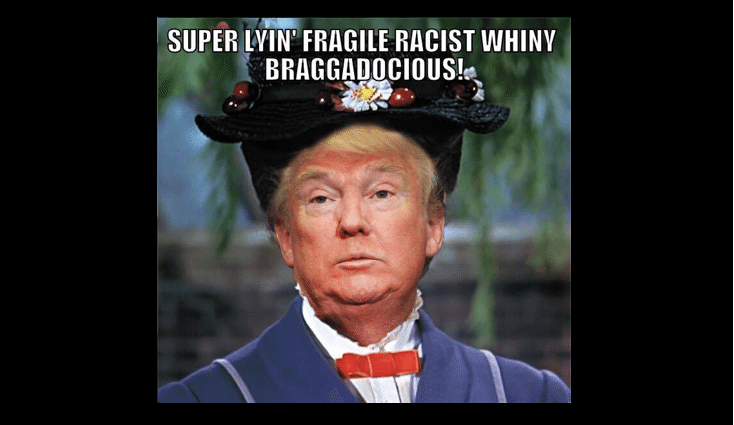 Let’s face it, many politicians on both sides of the Atlantic are acting like a bunch of spoiled brats at the moment. UK Labour MPs are furious that the membership of the party won’t buy their snake oil any more, and the US Democrats are actually struggling to fend off the worst Republican candidate since Barry Goldwater. But on the bright side, it does provide great fodder for the online jokes department.

We picked up this little piece of treasure on 28 September, and it’s kept The Canary newsroom in much-needed laughs through a decidedly dark 24 hours of news. So we thought we would pass along the joy.

The footage has now been viewed by well over 11 million people, going viral across the US and the whole English-speaking world.

According to the majority of polls, Clinton won the first presidential debate. But for most people watching, it was agreed that the biggest loser was America – as this was not a debate about much other than personality politics. Neither candidate was setting out a compelling vision for America at home or abroad, and it felt more like something viewers survived than were enriched for having watched.

Honestly @HillaryClinton and @realDonaldTrump should set an example and retire. Go home already and enjoy your savings. #debatenight

Wars, refugees and protesters – just some of the things missing from the first presidential debate. #debatenight pic.twitter.com/l9ieJeDGyc

In fairness, much of this had to do with Trump. As I heard it put recently, debating Trump is like playing chess with a pigeon. Whatever you do, he’s just going to strut around knocking things over like he owns the place.

With the race beginning to head into the home straight, a deeply unpleasant choice is facing many Americans. With no real chance of a candidate who will take the country in a direction anywhere good, voters will be putting a cross next to the candidate that might take them to the least bad place. Unenviable.