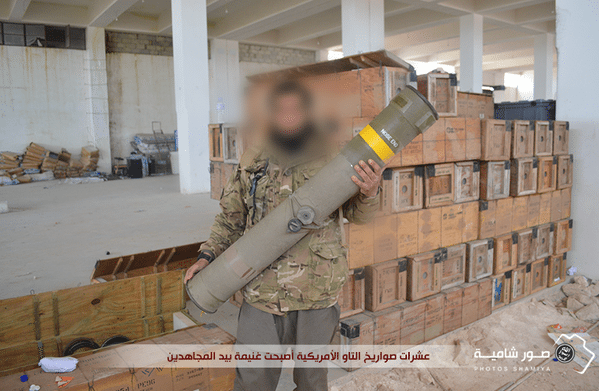 In a stunning interview with a German regional newspaper, a purported al-Qaeda commander in Syria has claimed that his terror group (al-Nusra Front) received support from the US in its fight against the Assad government. He specifically said that Nusra had received shipments of US-supplied ‘TOW’ anti-tank missiles and other advanced weapons systems.

The commander, identifying himself only as Abu al-Ezz, told investigative journalist Jürgen Todenhöfer in a face to face interview that while Nusra was routinely supplied and paid through US allies Kuwait and Saudi Arabia, it also enjoyed the quiet support of the US. When asked whether the TOW missiles first went through a US ‘vetted’ group like the Free Syrian Army before being transferred to Nusra, Abu al-Ezz responded:

No, the missiles were given directly to us.

The TOW missile system was controversially introduced on the Syrian battlefield, according to reports, as part of the joint CIA-Saudi programme to arm anti-Assad rebels in Syria (which was known within the US government as operation Timber Sycamore).

Todenhöfer has a reputation for producing high-risk interviews inside Iraq and Syria. In 2015, he became the first Western journalist allowed extensive access inside Daesh (Isis/Isil) territory.

Authenticity questioned: is it really a Nusra fighter?

While Todenhöfer has a stellar reputation of accurate reporting, some experts were quick to question the authenticity of the interview. Other internationally known experts promoted it as true, and the controversy continues. Nusra itself (which now identifies under the name Jabhat Fateh al-Sham) quickly released a statement denying the existence of anyone named Abu al-Ezz within its ranks, while not speaking about the obvious possibility of a pseudonym being used.

On Monday 26 September, the US State Department’s Mark Toner called the idea that the US would directly support a designated terror group “complete poppycock“, while adding that US regional allies might indeed be actively supporting the group. But he stopped short of condemning the actions of these allies.

The State Department’s official comment on the matter, however, seemed to lend credibility to some contents of the interview (namely, that al-Qaeda in Syria likely has state sponsorship).

Testimony of US special forces

Ironically, just two weeks before the interview was published in Germany, a bombshell report was produced by SOFREP News – a respected website run by US special forces veterans – which charged that the CIA consistently looked the other way while groups like Daesh and Nusra received US weaponry throughout the course of war in Syria. For the first time, US military personnel directly involved in covert activities in Syria were quoted:

“Nobody believes in it. You’re like, ‘Fuck this,’” a former Green Beret [US special forces] says of America’s covert and clandestine programs to train and arm Syrian militias… “I don’t want to be responsible for Nusra guys saying they were trained by Americans,” the Green Beret added.

Assuming that the Todenhöfer interview really features a Nusra commander, it appears that this Green Beret’s worst fear came true.

See the controversial interview and transcript

The translation below is provided by the Moon of Alabama blog, and is used here with permission of the translator:

Jürgen Todenhöfer: How is the relation between you and the United States? Does the U.S. support the rebels?

Abu al-Ezz: Yes, the U.S. support the opposition, but not directly. They support the countries which support us. But we are not yet satisfied with this support. They should support us with highly developed weapons. We have won battles thanks to the “TOW” missiles. We reached a balance with the regime through these missiles. We received the tanks from Libya through Turkey. Also the “BMs” – multiple rocket launchers. The regime excels us only with their fighter jets, missiles and missile launchers. We captured a share of its missile launchers and a large share came from abroad. But it is through the American “TOW” that we have the situation in some regions under control.

Todenhöfer: To whom did the U.S. hand those missiles before they were brought to you? Were those missiles first given to the Free Syrian Army by the U.S. and from there to you?

Abu al-Ezz: No, the missiles were given directly to us. They were delivered to a certain group. When the “road” was closed and we were besieged we had officers here from Turkey, Qatar, Saudi Arabia, Israel and the United States.

Todenhöfer: What did those officers do?

Todenhöfer: Were there also American experts?

Abu al-Ezz: Yes. The Americans are on our side, but not as it should be. For example we were told: We must capture and conquer “Battalion 47”. Saudi Arabia gave us 500 million Syrian pounds. For taking the “al-Muslimiya” infantry school years ago we received from Kuwait 1.5 million Kuwaiti dinar and from Saudi Arabia 5 million U.S. dollars.

Todenhöfer: From the governments or from private persons?

Abu al-Ezz: From the governments.

Note: The translation continues at Moon of Alabama.

– In the UK, join your local Stop the War Coalition to oppose further escalation in Syria.