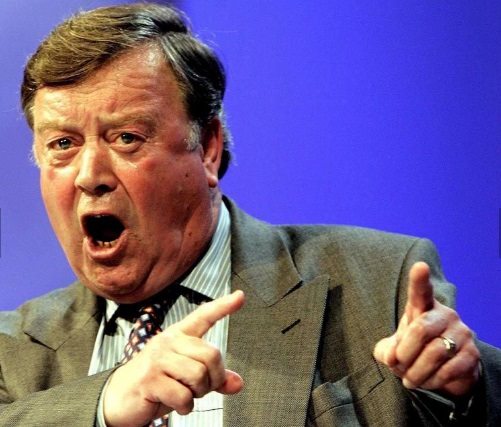 Veteran Conservative MP Ken Clarke sparked a civil war in his party on Thursday 29 September, just as Jeremy Corbyn appears to be uniting Labour. The former Justice Secretary and MP for Rushcliffe blasted Theresa May’s government for having “no policies”, and called a group of fellow ministers the “Three Brexiteers”, in a scathing attack on his party.

In an interview with The New Statesman, Clarke said that under Prime Minister (PM) May, the Brexit vote is being handled disastrously:

Nobody in the government has the first idea of what they’re going to do next on the Brexit front.

Whatever is negotiated will be denounced by the ultra-Eurosceptics as a betrayal… She faces an appalling problem of trying to get these ‘Three Brexiteers’ to agree with each other… Because nobody has the foggiest notion of what they want us to do.

The “Three Brexiteers” are Boris Johnson, David Davis and Liam Fox, all of whom May is having difficulty controlling. As The Canary previously reported, the PM is repeatedly having to assert her authority over her ministers.

Last week, Johnson went off message, saying that Article 50 (the official proceedings for the UK to leave the EU) could be triggered early on in 2017. A spokesperson for May hit back, insisting that she wouldn’t trigger the article before the end of the year.

Clarke also sparked outrage among his colleagues, as he said that June’s EU referendum was merely an “opinion poll”. He indicated that, if a Brexit vote was taken in parliament, he would cast his ballot to stay in:

I do think Parliament sooner or later is going to have to debate this… The idea that I’m suddenly going to change my lifelong opinions… and vote in parliament on the basis of an opinion poll is laughable.

This is not the first time Clarke has mocked the EU referendum. In a leaked email to The Guardian on 13 September, he said that:

The referendum is not binding. [Most politicians] paid lip service to the supposedly democratic nature of the exercise… [the referendum wasn’t] an instruction to any MP on how to vote… More significantly, none of the Brexiteers at the moment have any clear idea of what they want to do next…

In the New Statesman interview, he also took aim at former PM David Cameron, saying that he would “go down in history as the man who made the mistake of taking us out of the European Union”. But he was also critical of May. As The New Statesman said:

Clarke supports Theresa May, having worked with her in cabinet for four years. But his allegiance was somewhat undermined when he was recorded describing her as a “bloody difficult woman” during this year’s leadership contest. He is openly critical of her regime, dismissing it as a “government with no policies”.

But his most scathing attack was reserved for Johnson and former Justice Secretary Michael Gove:

People like Johnson and Gove gave respectability to Nigel Farage’s arguments that immigration was somehow a great peril caused by the EU.

The PM’s office has so far maintained radio silence on Clarke’s interview. It is maybe some measure of how far the current Tory government is heading to the right that the historically liberal Clarke is being repeatedly critical in public about it.

But with no particular strategy on Brexit, May’s ministers keep going ‘off message’. And now, with a veteran Conservative politician openly calling her administration out, the PM is once again under pressure. She could well be less jovial at the end of her forthcoming party conference than Corbyn was at his.

– Read The Canary’s other articles on the Conservative government.

– Support The Canary so we can keep bring you the news that matters.