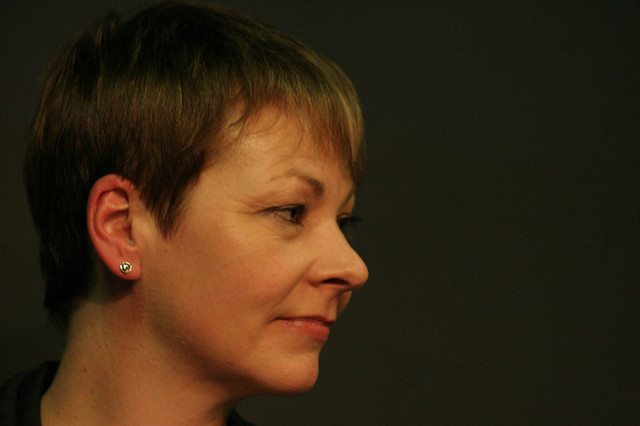 Caroline Lucas has slammed the “disgraceful” train operator Southern Rail, demanding that the Tories “put it where it belongs – in public hands”. It comes as a demonstration was held at London’s Victoria station on Thursday 29 September over the government’s handling of the so-called “Southern Fail” crisis. And amid the Southern Rail chaos, commuters are planning to take the Department for Transport (DfT) to court.

Southern Rail has been in chaos for nearly two years. The network has suffered constant delays, overcrowding on trains and platforms, and a long industrial dispute with the Rail, Maritime and Transport Workers Union (RMT). Commuters and staff alike have expressed outrage at the lack of government help.

As The Canary previously reported, the government announced in early September that it would subsidise the private company to the tune of £20m in an attempt to sort out the rail operator’s mess. But there was an almighty slap in the face for passengers and workers alike. Southern Rail had actually just increased its profits to nearly £100m.

The rail operator has hit the headlines repeatedly this year. The parent operator of Southern Rail, Govia Thameslink, is rated as the worst rail company for punctuality, with just 81.5% of its trains arriving on time. It was also named the worst rail company in the National Rail Passenger Survey. The Rail, Maritime and Transport (RMT) union is in a protracted industrial dispute with Southern Rail over jobs, working conditions and passenger safety. And as The Canary previously reported, ticket prices are set to go up by 1.9% in England, Scotland and Wales from January 2017.

The public already subsidises Southern Rail, costing taxpayers £40m each year. But at the same time, the boss of Go-Ahead (the overall parent company of Southern Rail) saw his pay deal jump to £2.16m in 2015. And on 2 September, Go-Ahead announced a 21% rise in its pre-tax profits to £99.8m, while revenues for the 12 months up to July rose by 4.5% to £3.4bn. The results sent the FTSE 250 companies’ shares surging by 8.6%.

Green MP Lucas slammed Southern Rail in a statement read out at the Victoria station protest. She said: 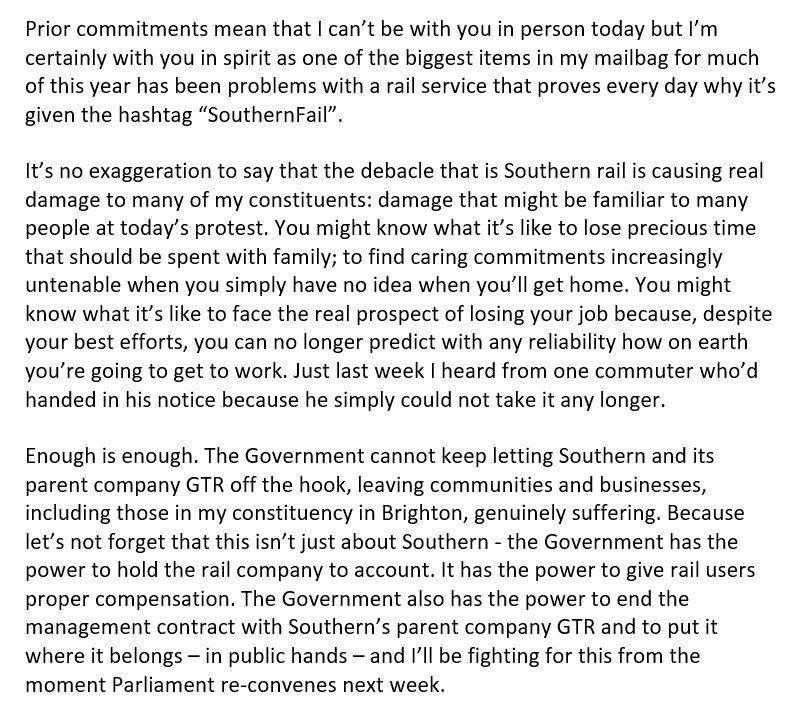 Lucas said in an earlier statement, seen by The Canary, that Southern Rail was “disgraceful” and “unfit for purpose”, and called on the government to “take the contract off” them. She also criticised the Tories for allowing the “effective collapse of such vital infrastructure, with all the associated impacts on business, tourism and personal well-being”.

The Conservatives in court?

The ABC is seeking to bring a judicial review against the DfT. This is a legal process in which the High Court can review the decision-making process of the DfT. If the government is found to have not fulfilled its duties, the court can make an order declaring the DfT’s actions unlawful. This will stop it continuing in its course of action and require it to take steps to sort the crisis out. ABC has launched a crowdfunder, with an initial target of £25,000. And in less than a month, it’s already raised nearly £20,000.

Lawyers acting for the ABC have written to the DfT asking for numerous documents to confirm whether Southern Rail/Govia is in breach of its contract. None of these requests has been granted, and the only response after weeks, from the DfT, has been one which has attempted to stall the release of the documents. ABC lawyers are now considering the grounds for the legal challenge in light of the DfT’s response.

It is hard to understand why the government cannot be transparent about their dealings with a private company that is failing on such a scale. We cannot move forward without transparency from the DfT, who hold the key to understanding how this rail catastrophe came about. Essential documents remain redacted and withheld, and this has massive implications for the whole country. The public have a right to see exactly what has been going on behind the scenes.

With polling suggesting that the majority of the public supports renationalisation, and the “TrainGate” furore surrounding Virgin Trains and Jeremy Corbyn, companies like Southern Rail may be running out of track. And with the DfT facing the possibility of legal action, Lucas’ call for the operator to be back in “public hands” will probably resonate with millions of angry commuters.

This article was updated at 8.30pm on 29 September to reflect a new petition, below.