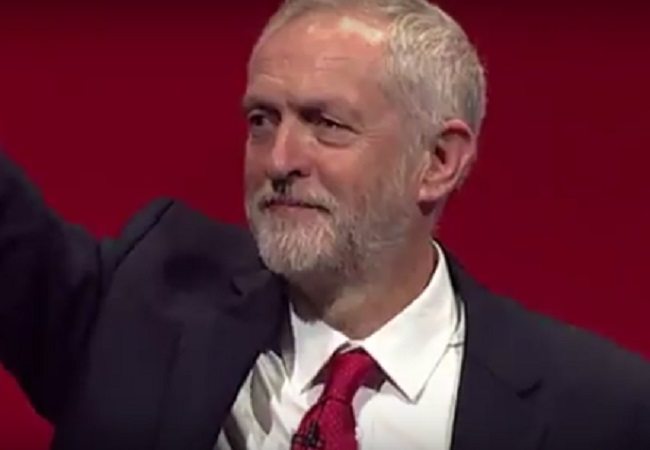 Jeremy Corbyn delivered his speech to the Labour Party conference on Wednesday 28 September; his first as re-elected leader. And he said he was determined “to win the next general election and form the next government”.

Speaking in front of a packed crowd at the ACC Liverpool, he was introduced by Hillsborough campaigner Sheila Coleman with a rally to “unite behind your socialist leader”. Looking slightly overwhelmed, but confident, after chants of ‘Jez We Can’ from the audience, Corbyn began by thanking everyone there, and saying:

I gotta correct myself because I did say the hall is completely packed. Well I got a message on the way in from Virgin Trains, they assured me there are 800 empty seats in the hall.

Speaking of his aim to get the Labour Party ready for government, he called for unity after a difficult few months:

Most of all, [Labour] is about winning power… to deliver the change our country so desperately needs. That is why the central task for the whole Labour Party is to rebuild trust and support to win the next general election and form the next government. That is the government I am determined to lead, to win power to change Britain for the better.

Moving on to the much-debated subject of abuse within the party, Corbyn said:

[We have] a responsibility… to take care with our rhetoric… Our party must be a safe and welcoming space for everybody. And let me be absolutely clear: antisemitism is an evil. It led to the worst crimes of the 20th century. [We must] ensure it is never allowed to fester in our society again. This party always has and always will fight against prejudice and hatred of Jewish people with every breath in our body.

No more Blair, no more May

Corbyn went on to make a pointed remark about those who would like to see a return to Blair’s ‘Third Way’ politics:

It’s no good harking back to 20 and 30 years ago. The old model is broken, we’re in a new era that demands a new politics that meets the needs of our time. Even Theresa May gets it.

Savaging May’s promise of building a country that “works for the many, not just the privileged few”, he said:

He spoke of the housing crisis, the rise in homelessness, the mass selling-off of council homes without replacement, and the amount of housing benefit paid to private landlords (which is effectively a subsidy). He pledged to build over 500,000 new council homes, and to control rents to give everyone that basic human right: “a decent home”.

Moving on to the banking sector, he said millions of ordinary families paid the price for the 2008 crash, and pledged to “never let a few reckless bankers wreck our economy again”. He then laid out his ten pledges, joking:

Don’t worry, conference, they’re not the Ten Commandments. I haven’t come down the mountain with them, they’re here already.

A dig at the ‘Ed Stone‘, perhaps. But Corbyn said that the country would support these pledges once it was given the chance to do so. He reiterated the pledge of a National Investment Bank, and also spoke of reviewing tax laws, to make them “fit for the 21st century”. He also promised a National Education Service, to “deliver high-quality education for all, throughout our lives”.

He said that Labour will “resist a Brexit at the expense of workers’ rights and social justice”, but said the party would have its own “Brexit agenda” (with the ability to intervene in industry when needed), and would build a new relationship with Europe “based on cooperation and internationalism”.

He was very clear on his stance on immigration, something which has been repeatedly debated at the conference this year:

He also maintained that he was “right to apologise… for the Iraq war”. He got a standing ovation for this, but John McTernan (a former advisor to Tony Blair) was reported to have left the hall at that point. Corbyn said that he would create a foreign policy based on “peace, justice and human rights”, while honouring our international obligations on nuclear disarmament.

Corbyn went on to say he was “absolutely convinced that we can build the electoral support needed to beat the Tories”, by appearing to pitch to the middle ground:

Last year… many didn’t believe we offered the alternative they wanted. It’s true there’s an electoral mountain to climb. But [we must] focus on the needs and aspirations of middle and lower income voters, of ordinary families… demonstrate we’ve got a viable alternative to the government’s failed economic policies.

Towards the end, he turned his attention to what he described as the “trench war” that’s been going on in the party between the ‘moderates’ and the ‘left’. He appealed for unity:

Let’s be frank, no one will be convinced of a vision promoted by a divided party. We all agree on that. So I ask each and every one of you, accept the decision of the members, end the trench warfare, and work together to take on the Tories. Anything else is a luxury that the millions of people who depend on Labour cannot afford.

And he ended by calling for unity yet again, saying:

We are half a million of us, and there will be many more, working together to make our country the place it could be. Conference, united we can shape the future and build a fairer Britain in a peaceful world.

You can watch the speech here:

While his speech was certainly wide-ranging and impassioned, there will be many in the party who will not be impressed by his words. Especially his comments on the invasion of Iraq, foreign policy in general, and the repeated, underlying, thrust of ‘socialism’.

There will be countless more members, however, for whom Corbyn’s speech has been a long time coming. Whether this moment will be the line in the sand for Labour, and the party will now unite moving forward, is anyone’s guess. But Corbyn’s delivery, passion and zealous commitment showed one thing: there is no reason for him not to be a Prime Minister-in-waiting.