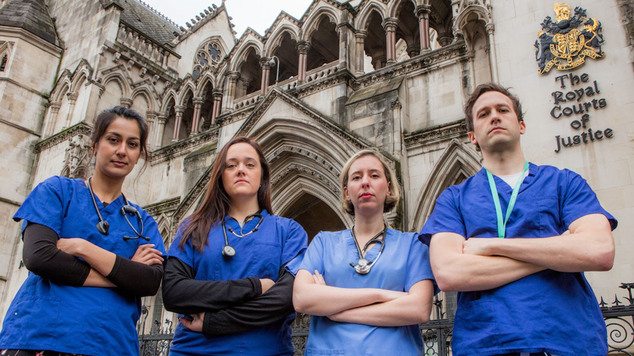 The junior doctors just lost their High Court legal action against Health Secretary Jeremy Hunt and the Department of Health (DoH). The judicial review, which was to decide whether Hunt had acted lawfully in trying to force the new junior doctors’ contract upon the NHS, was enabled by a crowdfunder, which raised more than £300,000 in total.

The judge, Mr Justice Green, ruled that Hunt had not breached his powers to implement a new contract.

We welcome this clear decision by the judge that the Secretary of State acted entirely lawfully. We must now move on from this dispute to the crucial job of making sure patients get the same high standards of urgent and emergency care every day of the week, which involves more than the junior doctors’ contract.

But in a statement, the Justice for Health team (which brought the legal challenge) state:

They say that it is now clear that, regarding the contract:

Mr Hunt’s last minute legal acrobatics have saved him from losing the case but bring no comfort to the thousands affected by his actions in the last year.

Not safe, not fair

“Justice for Health” (JfH), a group of five junior doctors, crowdfunded the costs of the legal campaign in an attempt to stop the imposition of the controversial new contract. A protracted industrial dispute has continued, seeing the profession’s first full strike in history. But Hunt’s position has remained unchanged, and he will impose the new contract from this October.

The basic arguments against the contract are clear:

In July, junior doctors (via the British Medical Association (BMA)) rejected the contract in a referendum – with 58% voting against the deal. Nearly 68% of those eligible turned out to vote – around 37,000 junior doctors and medical students. Strike action was planned for October, November and December, but this has been cancelled over patient concerns.

Unfortunately because of the vote we are now left in a no-man’s land that, if it continues, can only damage the NHS. I have decided that the only realistic way to end this impasse is to proceed with the phased introduction of the… contract… [to be] introduced from October this year.

What the JfH team accused Hunt of doing was overreaching his mandate as Secretary of State for the DoH. As The Canary previously reported, JfH argued that:

It was the group’s claim that the NHS in England is structured so that Hunt “cannot tell foundation trust hospitals, local councils or GP surgeries who to employ or on what terms”. He may be able to instruct other NHS trusts, but only after “undertaking a public consultation about the effect of his plans”, which he has not.

Finally, Hunt also made his decision to impose the contract before the terms and conditions were finalised, and before an Equality Impact Assessment had been completed. This, JfH says, makes it unsafe.

Hunt’s legal team dismissed the allegations as “wholly without substance”, saying he merely felt the new contract should be introduced by the NHS. He had not attempted to “compel” NHS employers to use it, but simply wanted to “approve” the new contract.

JfH disagreed. It felt that Hunt was attempting to dictate the terms on which NHS employers and other bodies should work with junior doctors. Regarding support from employers, it said:

[Hunt] claimed that he had the backing of 18 hospital trust chief executives, this claim has now unravelled as 12 of them have made clear that they disagree with imposition.

Justice Green outlined last week that he thought it was “plainly a serious case” that “requires full judicial review”.

While the judge ruled that Hunt had not acted illegally, he said that individual NHS Trusts could still negotiate with junior doctors over the contract. The JfH team said:

We have worked very hard to get this case to court and we are thankful to have had the opportunity to hold Mr Hunt to account. The judicial review proceedings were necessary to gain clarity in the law and force Mr Hunt to answer for his conduct. We hope it sets a precedent for better ministerial conduct and deters the SoS from making statements about imposition on other NHS staff groups.

After a short break, Justice for Health may explore further legal challenges and campaigns we could help take forward on behalf of NHS staff and patients.

The BMA has yet to comment, but with the first roll-out of the contract less than a week away, action will need to be taken quickly if the process is to be halted.

This article was updated at 1.03pm on 28 September to reflect a statement from the Justice for Health team.