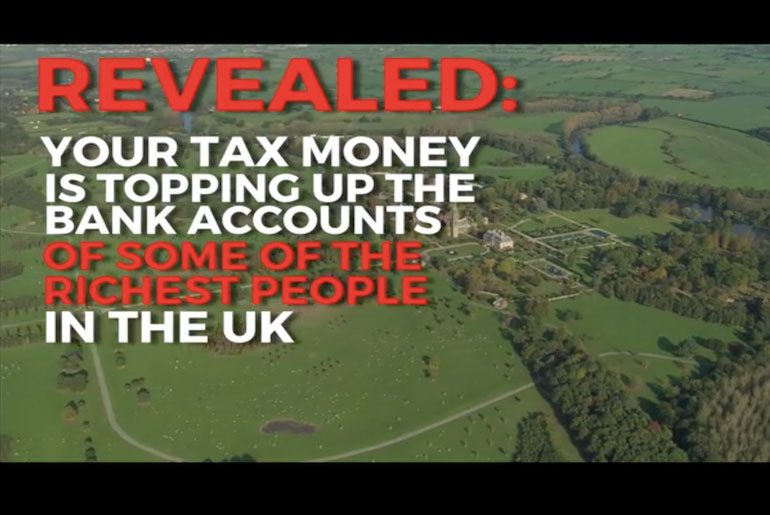 A recent Greenpeace investigation has revealed the dark reality behind the EU’s Common Agricultural Policy. It was initially created in 1962 to help protect farmers against unstable crop prices and mounting pressures. But instead of helping the most vulnerable, the policy has actually been helping the most wealthy and privileged. Every year, the UK’s richest landowners receive payouts, with the Queen bagging £557,706 a year. A lump sum which could employ 24 new junior doctors every year.

Across Europe, the EU pays out around £40bn of taxpayer money in such subsides each year. A total £3.2bn of that is paid to the UK. But 16 of the 100 biggest payouts are going to people on The Sunday Times rich list.

Alongside the Queen, several other UK aristocrats and a Saudi prince have been profiting from the policy. Prince Khalid Abdullah al Saud is given more than £400,000 a year to subsidise a farm in Suffolk. The Duke of Westminster and Duke of Northumberland take home almost half a million each. And the new environment minister, Lord Gardiner, has received £105,433 in the last two years alone.

When asked if the Queen thought it appropriate to receive taxpayer subsidies, a spokesperson told the BBC:

Subsidies are open to all farmers, and are received on the Queen’s private estate. We would not comment beyond the detail that is already in the public domain.

While the policy is indeed open to all farmers, its current system has been criticised as privileging the few rather than helping the many farmers in desperate need. Instead of helping those in need whose livelihood depends on the success of their farm, the subsidies are given to the wealthy few who are already in a position to support themselves.

Every year, Europe loses 2% of its farmers, and this number is only likely to increase with growing pressure from supermarkets and climate change. With supermarkets forcing farmers to reduce their prices, as the president of the National Farmers Union warns, “British farm produce could become a rare sight in UK supermarkets”.

Greenpeace is campaigning for the policy to be reformed. Chief scientist Doug Parr argues:

The subsidy system is utterly broken. We need public money spent on farming to be offering demonstrable public benefits.

Such benefits would include safeguarding the future of Britain’s produce. Alongside safeguarding the farmers, the policy was also designed to subsidise the cost of producing food in Europe, ensuring the UK wasn’t “dangerously dependent on fluctuating imports”. This issue is more relevant than ever, given the rising threat of climate change on food security and the news that China is already buying up land in South America to safeguard its own production capacity.

Since the announcement of the Brexit vote, the Conservatives have [paywall] pledged to pick up the subsidy bill at least until 2020, offering £6bn to help British farmers, academic researchers and poorer regions. While this is positive for those in need of funding, little detail has been given on whether the current policy will change.

At present, the policy is still largely found to “reward landowners for simply owning land, rather than paying farmers to invest in environmental or other public good measures”. This policy allows the rich to prosper without a requirement for them to invest in the public good, and without providing proper support for those most in need.

With such an uncertain future both for farmers and our environment, it is paramount that this policy changes as soon as possible, to protect their livelihoods – and the land they use.

– Read more about environmental issues on The Canary.