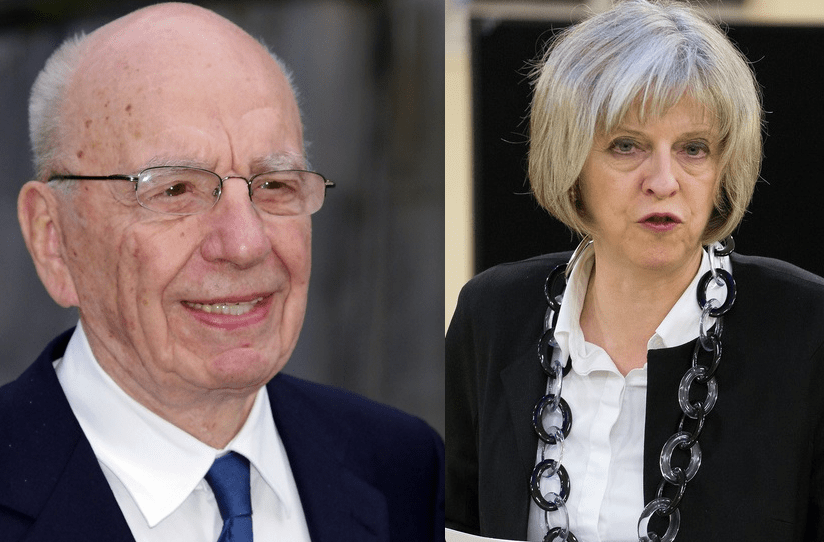 People took to social media to express their outrage on 29 September after it emerged that Theresa May had an ‘off the books’ meeting with Rupert Murdoch last week:

Taking time out of a busy schedule, the UK Prime Minister managed to squeeze in the meeting during a one-night trip to New York. She spent most of her time in the US trying to woo super-rich multinational corporations like Goldman Sachs and Amazon to invest in Britain after Brexit:

I wonder whether they'll be discussing the Theresa May & Rupert Murdoch play date on #bbcqt tonight? More likely to stick to Corbyn-bashing.

When asked by journalist Anthony Hilton why he was so against the EU, Murdoch once said (reportedly):

A long history of king-making

Murdoch – owner of The Times, The Sun and Sky News in the UK – has backed every single election winner since 1979. This record has earned the press baron the title of ‘Kingmaker’.

Tony Blair’s friendship with Murdoch was seen to be instrumental to the former Labour Prime Minister’s electoral success, where the media mogul backed him in all three victories. Straight after being named Labour leader, Blair travelled halfway across the world to speak at an annual News Corp meeting. They ended up fostering such a close relationship that Murdoch named Blair as the godfather to one of his children.

Cameron is very much in debt to Rebekah Wade for helping him not quite win the election.

Grant, who locked horns with Murdoch during the phone hacking scandal, lamented the private meeting between May and Murdoch:

Soft moan of despair for my country. "Theresa May had private meeting with Rupert Murdoch | Media | The Guardian" https://t.co/JY3vjAi1ZV

In a more recent alleged indication of the press baron’s power, a Conservative MP was forced to deny that Murdoch was behind Boris Johnson pulling out of the Tory leadership contest. A private email from Michael Gove’s wife seemed to suggest that the media mogul “instinctively dislikes” Johnson. The email leaked right before the former London mayor unexpectedly withdrew from the leadership race.

Back on social media, singer and Jeremy Corbyn supporter Lily Allen suggested a reason why May and Murdoch had the private meeting:

I imagine to let her know what her policies are going to be. https://t.co/KCUg7o81En

A world without Murdoch?

Others noted how newly re-elected Corbyn could break the mould:

If Corbyn is elected PM, he will be the first PM to be elected not owing anything to Murdoch since ….Harold Wilson in 1974#VoteLabour

At present, Rupert Murdoch’s News UK controls a third of our national newspapers – 70% of which are owned by just three companies. Such a corporate monopoly means that media moguls can run amok over British democracy. Politicians can be held to ransom. If they don’t deliver favourable policies for Murdoch and other press barons, they’ll be treated awfully by publications that reach millions of voters.

Breaking up media monopolies, as has been proposed by Corbyn, would help to bring about a meaningful democracy in Britain, for which an independently informed electorate is the bedrock.