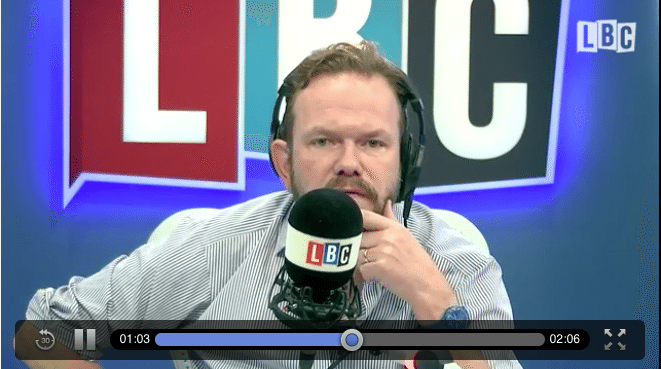 In a Conservative Party Conference speech that will likely join those of Enoch Powell and Norman Tebbitt in the darkest corridors of British history, new Home Secretary Amber Rudd laid out plans for a crueller, colder Britain this week. LBC radio host James O’Brien noticed something familiar about the language, and then he realised where he’d heard it all before: in Chapter 2 of Adolf Hitler’s Mein Kampf.

Rudd laid out plans this week for businesses to hold lists of their foreign workers, in order to be named and shamed by the government. She also spoke out against foreign students who come to the UK for higher education, keen to draw a sharp line between the benefits and support the state offers to British citizens and those it offers to new residents. As O’Brien points out, this kind of thinking echoes some of the most horrific periods of European history. He told listeners:

I want to read you something from Amber Rudd’s speech yesterday. ‘For the state must draw a sharp line of distinction between those who, as members of the nation, are the foundation and support of its existence and greatness, and those who are domiciled in the state, simply as earners of their livelihood there.

You have to have a sharp line of distinction between those who are members of the nation and those who are just domiciled here as earners of their livelihoods.’

Mein Kampf, translated as ‘My Struggle’, is the book in which Hitler set out his vision for a future Germany, Europe and world under his proposed 1,000-year Reich (or ‘realm’). His theories rested on creating false distinctions between ethnic and national groups and inciting envy, suspicion and ultimately hatred against those he deemed as dragging the nation down – Jews, Romanians, left-wingers, liberals, LGBT people, sick and disabled people, and so on.

Is Amber Rudd building labour camps and gas chambers? No. But she is laying the political and social foundations that set Germany on course for disaster in the 1930s. She is telling impoverished, desperate people that the fault of their circumstances can be pinned on these interlopers – the migrant, the refugee, the student.

The housing crisis isn’t a failure of government to build homes at affordable prices – it’s because there are too many (non-British) people. Parents are struggling to get their children into a decent school because of all the immigrant, non-English-speaking children – certainly not because the Conservative government has underfunded the education system and so berated its staff that 50,000 teachers left in 2015 alone, leading to a critical shortage of staff. People are seeing loved ones waiting endlessly for treatment and operations because foreigners are blocking beds in our NHS – it’s definitely not because the government is deliberately underfunding the health service while selling critical services off to shoddy private providers.

Like fascists throughout history, Amber Rudd is pinning the failures of her own government and political class on the backs of the most vulnerable and marginalised people in society. And her speech was a craven and shameless assault not only on those groups, but on truth itself.