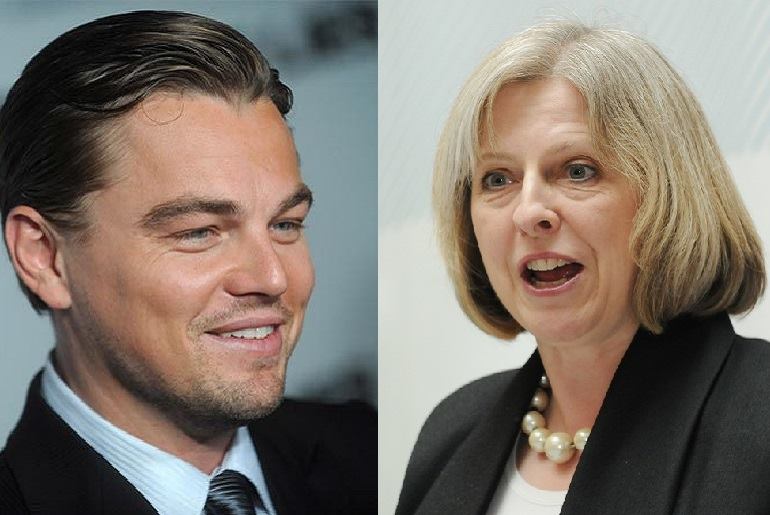 Leonardo DiCaprio just made a massive announcement at the White House. Aiming his statement at all world leaders, he publicly shamed those who aren’t taking climate change seriously. One of those leaders is the UK’s very own Theresa May.

In his speech, he stated:

While some claim his comments were aimed at Donald Trump, DiCaprio’s statement is also a well-suited attack on May’s Conservative government.

Theresa May and climate change

May’s record on addressing climate change is extremely poor. In one of her first acts as Prime Minister, Theresa May announced plans to abolish the Department for Energy and Climate Change. This despite a recent government report stating Britain must urgently prepare for flooding, heatwaves and food shortages.

Throughout her time in office, she has generally voted against measures to prevent climate change, supported selling off England’s state-owned forests, opposed regulations on fracking, and showed little concern for environmental issues given her often ‘absentee’ record. This included not showing up to vote on financial incentives for low-carbon electricity generation.

In another blow to the environment, Andrea Leadsom was allowed to continue her role as the Energy Minister in May’s cabinet. Leadsom’s record includes voting for fracking initiatives, questioning whether climate change was real and having strong ties to large oil investors.

In a continued effort to quash the renewable energy sector, in 2015 the Conservative government cut funding for all new large-scale solar farms and slashed subsidies for smaller installations by 87%. May’s government continues to enforce these cuts despite their detrimental effects, including the loss of 12,000 jobs.

She continually forces through an aggressive energy agenda even though renewables continue to prove their potential as a viable alternative. Just take the fact that only four large offshore wind farms have the capability to match the 3.2 Gw of power expected from Hinkley Point. And, the fact that solar panels have generated more electricity than coal in the past six months.

As a recent report confirms, Britain’s renewable energy industry is about to “fall off a cliff” at the very point it should be coming into its own.

experts have warned this [renewable energy success] is all about to grind to a halt as the government abandons its commitment to green energy and instead invests in fracking and nuclear power.

While May continues to be blind sighted, other countries are adhering to DiCaprio’s warning and are actively preparing for climate change. Costa Rica plans to be carbon neutral within six years; Germany has banned fracking; Norway is planning to ban all petrol cars by 2025; and Denmark produced 140% of its electricity demand via wind farms in 2015.

While this current Conservative government is driving Britain into the ground, it is important to remember there are MPs from other parties (notably some Labour MPs) who have failed to oppose the government’s measures. There needs to be an attitude change across the whole of parliament. DiCaprio highlights the desperate need to have world leaders who work to address climate change. And, whatever your political stance, I think we can agree that’s not Theresa May.

– Read more about environmental issues on The Canary.