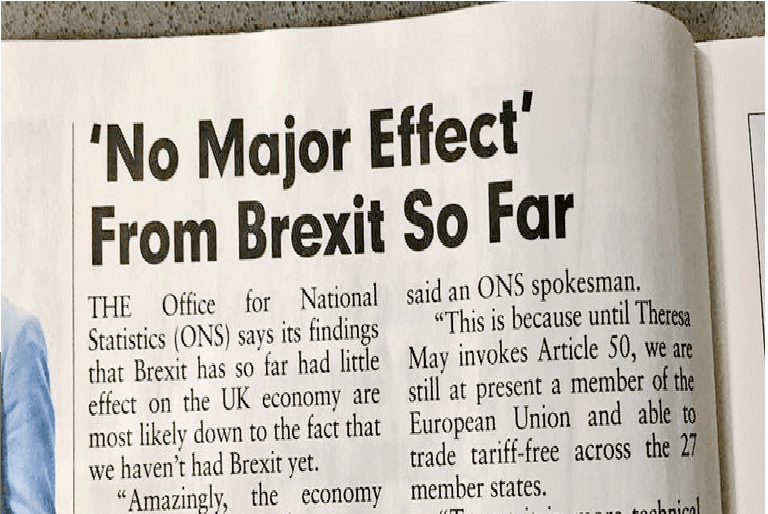 A Private Eye story has gone viral for perfectly summarising the Brexit debate. The column uses dry humour to mock Brexiteers who hail the fact that the vote to leave the EU hasn’t had much of an effect on the economy so far.

Bravo. The point being, of course, that we haven’t actually left the EU yet.

But that hasn’t stopped UKIP-supporting news outlet The Express dropping a whole host of articles like the following: 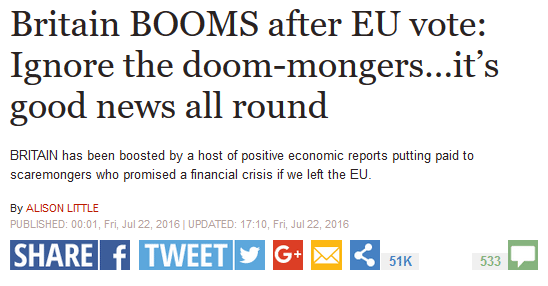 Contrary to what economists and big banks like Goldman Sachs said, Brexit has heralded a new wave of growth as Britain prepares to unshackle itself from Brussels.

Yielding nearly 3,000 retweets and likes on Twitter and a further 17,000 shares on The Huffington Post, Private Eye‘s satirical piece mocking such Brexiteers has gone viral.

The article references a report from the Office for National Statistics (ONS), which concluded there had been no “major effect” of Brexit so far.

At the Conservative Party Conference, the Prime Minister made her plan for Brexit sound very simple.

Most of EU law comes from the European Communities Act 1972. So with a repeal bill, she will incorporate all of that law into British law. But as politics.co.uk editor Ian Dunt notes, the reality is a lot more complex:

Snapshoting the European Communities Act doesn’t actually fix the problem it is designed to fix. EU law is all over the place – not just in the 72 Act. It covers areas like discrimination, public procurement and right of equal access. Take the Equalities Act. Most of its provisions, say on race or gender discrimination, were UK law. But the bit on age discrimination was European law. It’s like this all over the place: a mess. Actually untangling EU and UK law will take years and is much more complicated than just copying and pasting the original Act.

Then take regulators. A lot of that EU law is recognising European regulators. If we copy and paste that law, we’d still be governed by those regulators, which we presumably don’t want to be. And presumably they’re not too keen on using resources to regulate a country which is no longer a member state either.

This is a serious issue. We do not have the time, the money or the resources to create countless regulators in the two-year Article 50 timetable.

So the process of leaving the EU is going to be a lot more complex than the government makes out. And as Private Eye rightly points out, if some of the predicted adverse effects on the economy haven’t happened yet, that’s simply because we haven’t even begun to leave.