Saudi Arabia just committed a war crime in Yemen, and the Tories want to flog them more weapons [VIDEO] - The Canary 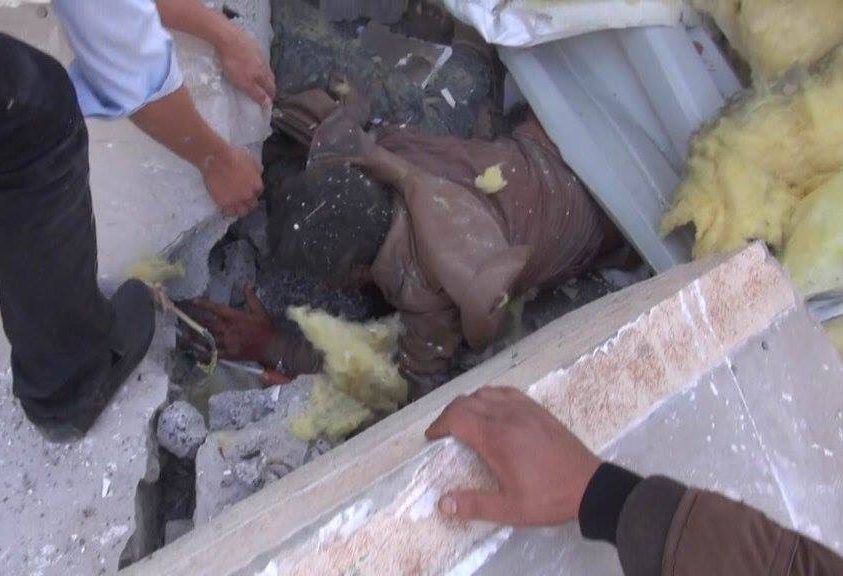 On Saturday 8 October, Saudi Arabia allegedly bombed a funeral gathering in the Yemeni city of Sana’a, in what may constitute a war crime. Reports indicate that 140 people were killed and more than 500 injured, making this one of the worst atrocities of the ongoing conflict in Yemen. And it came in the same week it was announced that the UK government is in talks with Saudi Arabia over another five year weapons contract.

The attack occurred at around 2pm BST, as mourners gathered for the wake of the father of Jalal al-Rowaishan, Yemen’s Interior Minister. In scenes which one eyewitness described to The Canary as something from a “zombie movie”, bodies were apparently burnt to the bone with many children among the casualties.

The Saudi-led coalition initially denied responsibility for the attack in Sana’a, saying there’d been no operations in the area. But it later appeared to backtrack, saying it was “regrettable and painful”. In a televised statement, Houthi leader Abdulmalik al-Houthi said the US had “permitted” the Saudi attack, and called on all Yemeni people to “fight this Saudi aggression”.

The hall where the funeral was held, which can hold up to 2,000 people, was seemingly hit in what’s known as a ‘double tap’ air strike:

A double tap is when a plane bombs a target once, and then waits for survivors to emerge or for help to arrive before bombing again. This type of attack is being increasingly used by the Saudi-led coalition in Yemen, but has been widely criticised, as emergency responders often get caught in the second round of bombing.

The US government said in a statement that it was carrying out an “immediate review” of its support to the Saudi-led coalition, and was prepared to change it “to better align with US principles, values and interests”, as its support wasn’t a “blank cheque”. The statement came as reports on the ground in Sana’a suggest that the weapons used in the funeral attack were made by US company General Dynamics.

But the UK government’s response was less decisive. Tobias Ellwood, Minister for the Middle East, said:

I am deeply concerned by reports of an airstrike hitting a funeral hall in the Yemeni capital Sana’a yesterday… I am raising my concerns with the Saudi Ambassador to London today and urge the Saudi-led coalition’s announced investigation into the incident to take place as a matter of urgency.

There can be no military solution to this conflict. We urge all sides to recommit to political talks and to implement a cessation of hostilities.

The attack in Sana’a came just days after the UK government and BAE Systems announced they were in talks with Saudi Arabia over a possible five year arms deal. The talks, which have been happening behind closed doors for two years, are to negotiate the sale of 48 Eurofighter Typhoon jets to the Saudi air force. They come off the back of a £1.7bn deal last May for the same type of aircraft. The Typhoon was directly used in the bombing of 49 schools and hospitals in Yemen in 2015, and has caused the deaths of at least 510 children.

The UK’s arming and support of Saudi Arabia in this conflict has been well documented. In January, Saudi Arabia’s foreign minister Adel al-Jubeir said that UK forces are present in the command centres where air strikes on Yemen are coordinated. The government said it was providing training and advice “on best practice targeting techniques to help ensure continued compliance with international humanitarian law”. But it was keen to stress that UK troops were “not directly involved in Saudi-led Coalition operations”.

Britain is a heavy exporter of military goods to the Saudi Arabia, having sold more than £3bn in arms since the Yemeni conflict began. The UK government has come under fierce criticism from campaigners, including Amnesty International, who say that war crimes have been carried out using British-made weapons.

Since the conflict began in March 2015, over 4,000 civilians have been killed. But it is Yemen’s children who have suffered the most. 320,000 children are severely malnourished, 10.2 million live without safe drinking water, 2.2 million are in need of urgent aid, 1.2 million have been displaced, and 10,000 under the age of five have died unnecessarily due to the destruction of Yemen’s healthcare systems.

It would seem that all sides in this conflict are unable to come to a resolution about how to end it. But what is also clear is that the international community is unable to take decisive action. And perhaps the most shameful record of inaction comes from the UK government, whose concern for trade and political allies in the Middle East has come at the expense of countless lives.

Half-baked statements from government ministers about ‘concern’ no longer wash, as the death toll in Yemen continues to rise.