Theresa May just dropped a Brexit bombshell, and it's going to cost us billions [TWEETS] - The Canary 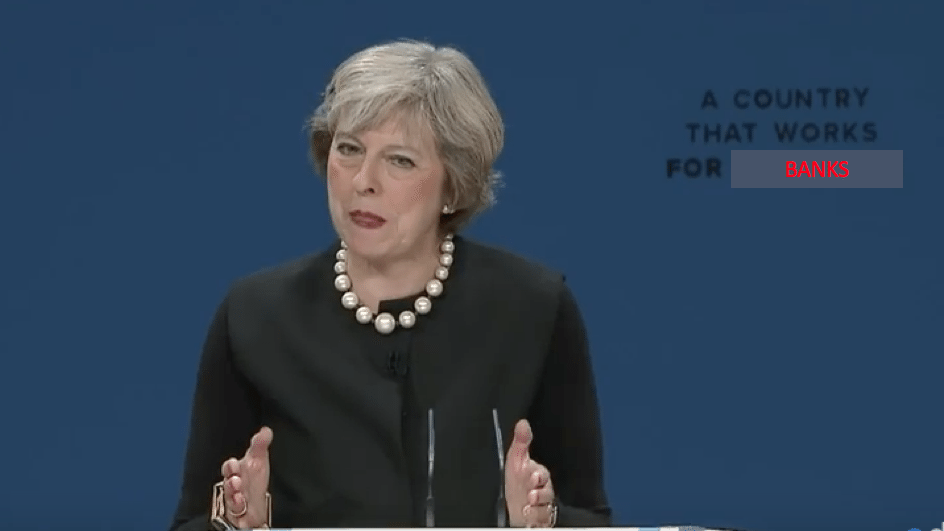 In a fresh blow to the British economy in the wake of the Brexit vote, Theresa May’s Conservative government has dropped another bombshell – a potential bank bailout for the financial services industry, paid for by the taxpayer.

Brexit and the City

The issue at stake for the City of London, the heart of the UK financial services industry, is that leaving the EU would mean the loss of so-called ‘passport rights‘ which grant it privileged access to trade on the single market. The Financial Times (FT) has since reported that the May government is discussing paying billions in annual fees to the EU in order to retain those passport rights – in effect, a publicly-funded post-Brexit bank bailout.

As The FT reports, the financial case for Brexit was always weak. But now, it is in tatters:

The Office for National Statistics said the average annual net British contribution to the EU between 2010-14 was £7.1bn, once the UK rebate and the flow of money back from Brussels to projects and institutions in the UK was taken into account.

On top of any future EU payments after Brexit, the UK will also face a divorce bill from the bloc for as much as €20bn, according to a Financial Times analysis.

The plans have thrown up a deep inconsistency in the economic arguments of much of the media and political class. In short, those who advocate passionately for ‘free market capitalism’ when discussing the welfare state, the NHS, transport, and energy have turned overnight into cheerleaders for state intervention and publicly subsidised industry when it comes to banks.

The UK is just eight years down the line from the biggest taxpayer-funded bank bailout in history. According to the National Audit Office, the UK National Debt rose by £850bn as a result. This is almost twice the nation’s total annual budget. For this amount, the UK could have funded the entire NHS (£106.7bn a year) for 8 years, our whole education system for 20 years (£42bn a year), or paid the entire Jobseeker’s Allowance bill (£4.9bn a year) for 200 years.

The public were repaid with austerity programmes which cut just under a million jobs from the public sector and saw the loss of mental health services, flood defences, libraries, swimming pools, care for the elderly, social housing, and critical welfare support for people living with terminal illnesses, chronic illnesses, and disability. There was no bailout for small businesses, parents, students, or elderly citizens.

The result is the slowest economic recovery since records began, the fastest falling wages in Europe except Greece, almost a million people on zero-hours contracts, and over a million people dependent on charity food banks to eat. The price of the financial crisis wasn’t paid by the banks that caused it, but by those who suffered most as a result.

As we approach Brexit, the Conservative government appears to be adopting the same strategy as New Labour in the wake of the financial crisis. With news of potential bailouts for Japanese car company Nissan in the pipeline too, it appears that the May government is picking and choosing which sectors get state handouts, and which are abandoned to the markets.

Alternative plans are not welcome

In a press release on the matter, Labour Shadow Chancellor John McDonnell has ruled out offering this protection to the financial services industry. He argues instead that the UK should be battling for all its industries, and that paying huge fees for access to EU privileges undermines the whole Brexit enterprise.

British taxpayers should not be expected to foot the bill for special privileges in accessing European markets solely for the financial service sector alone. Britain has voted to leave the EU, it has not voted for paying huge fees for special favours for bankers.

We support access to EU markets for financial services, but it is crucial for the British economy that the government insist on full, tariff-free access to the Single Market for all our industries, to protect jobs and livelihoods in the UK.

But it was McDonnell, and not the Prime Minister, who faced the wrath of the UK media.

The reaction was summed up best by Huffington Post Political Editor Paul Waugh:

Thankfully, members of the public were quick to point out the misrepresentation of McDonnell’s plans.

@johnmcdonnellMP "solely for the financial market alone" was the quote I believe?

@johnmcdonnellMP no, he's suggesting that the government will pay billions for the financial sector forgetting the rest of us.

Just as in 2008, the UK media is cheerleading disaster economics, and dismissing alternative ideas as lunacy.

But if the definition of insanity is repeating the same action and expecting a different result, it is the May government and its backers that have lost their marbles.