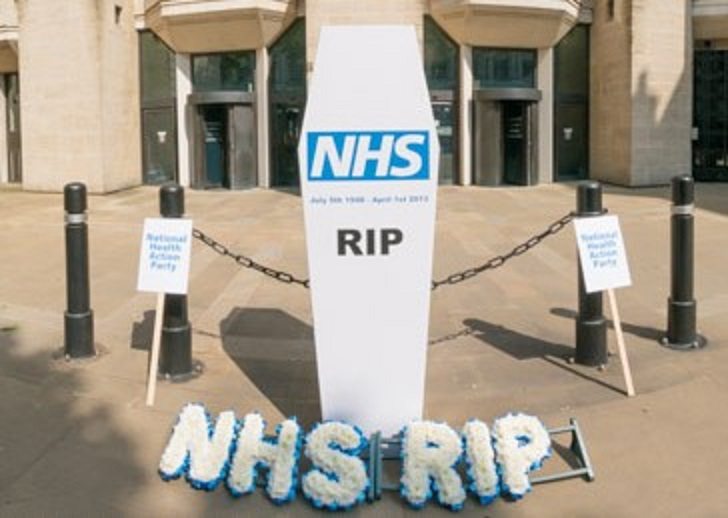 The Conservative government has quietly announced one of the biggest sell-offs in the entire history of the NHS. On Friday 14 October, the government’s website released details of nine NHS contracts that are up for sale. And they are worth a staggering £7.9bn; 7.3% of the total NHS budget.

The contracts, in the North West, South West, London, Yorkshire and Humber, two in the South East, and three in the East Midlands with no current value, are for what’s known as “prescribed specialised services”. While the government has not given specifics as to what services are up for sale, they fall into these categories:

The values of the two-year contracts are as follows:

The NHS says this type of sales are to “deliver consistent care standards across the country”, in line with what’s called the “Five Year Forward View“. NHS England and the Department of Health (DoH) say of the “view”:

There is now quite broad consensus on what a better future should be. This ‘Forward View’ sets out a clear direction for the NHS – showing why change is needed and what it will look like.

It sets out its mission as being to:

But critics argue that the Five Year Forward View is a “wish list for privateers“. As Dr Shibley Rahman wrote for openDemocracy:

Talk of ‘accountable care organisations’, as developed in Spain and the United States, and the emphasis on preventive health packages so keenly sold by multinational corporates, are paradigmatic of a privatisation plan.

The document is a naked shill, intended to carry on the ‘case for change’ made exhaustively by think tanks such as the King’s Fund. Such organisations were instrumental in giving the catastrophic policy of market competition in the National Health Service some legs in the first place.

The privatisation of services within the health service has accelerated since the Tories came to power in 2010. DoH figures show that the amount of money going to “independent sector providers” more than doubled from £4.1bn in 2009-10 to £8.7bn in 2015-16. As a percentage of the DoH budget, the amount of money going to private companies increased from 4% in 2009-10 to 8% in 2015-16.

To put these nine new contracts into context, they will increase the amount of money the NHS pays to private companies by almost 50% a year.

Selling off NHS services is nothing new. As The Guardian reported in January, Richard Branson’s Virgin Care group was given a £126m contract for health services in north Kent, including home visits and community hospital care. It beat the NHS bidder, Kent Community Health NHS Foundation Trust, to the contract. And as The Canary reported on 12 October, Branson is also buying up GP practices.

But this latest round of up-for-sale contracts is possibly the largest in NHS history. If they are awarded to private companies, not only will it mean more for-profit organisations running NHS services, but the loss of the contracts will ensure less money goes into the public arm of the health service.

Dr Bob Gill, a GP and NHS campaigner who is currently producing a film called The Great NHS Heist: Sell Off II, told The Canary:

Our NHS is being sliced open and contracts parcelled up into profitable packages prior to contracting out. The Five Year Forward View will gut hospitals of their profitable routine work which subsides the more complex care, and left to wither away. Overall reduction in access, quality and service provision will drive the public to the Tories intended Private Insurance run system made more profitable by denying care to the sickest and most expensive patients.

The Tories have never made any secret of their dislike for the UK public health service; indeed, several of them have co-authored books about how to privatise it. But this latest round of contracts, potentially going to private companies, is shocking. Under our noses, and while the junior doctors are attacked, the Tories are trying to sell off our NHS. It’s up to us to fight them every step of the way.