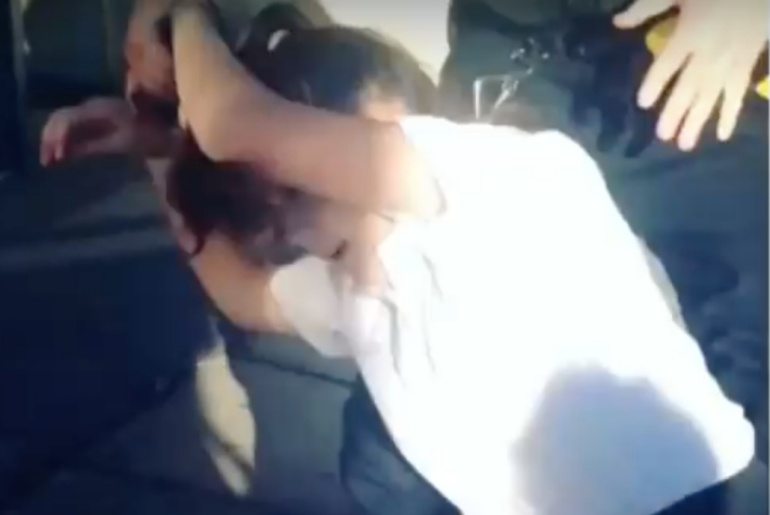 A woman has accused the police of treating her 13-year-old granddaughter “like a piece of meat” following an altercation outside a school in East London.

Video footage of the incident, captured by the girl’s twin sister, shows the girl handcuffed and being dragged along the floor. The girl was left badly bruised and with a lump on her head following the incident.

According to the girl’s grandmother, Joan Whittaker:

My granddaughter lifted her hand as if to slap this girl, but there was no physical contact with these two kids, it was just two kids having a dispute and the policeman went too far.

She’s not struggling, she’s compliant. She tries to get up and he just drags her like a piece of meat.

There is no footage of what happened prior to the involvement of this officer. But the fact that she was released before even being taken to a police station means there was no evidence she had committed a criminal act.

This policeman wasn’t tackling a grown man, this was a little girl of 13. It was extreme force and it absolutely was not justified.

And this is the point worth stressing. This police officer used excessive force on a child over a playground spat; a spat which didn’t even meet the threshold of a criminal offence.

Furthermore, according to the family, the police officer tried to pressurise her sister into deleting the footage she took.

Obviously, aside from bruising, the impact on this girl is unknown. But as previously reported in The Canary, this type of policing can lead to longer lasting mental health problems. Regardless, the fact remains that a young girl was overpowered and dragged around by a man almost double her size.

There can be no excuses for this type of policing. There is no reason for a grown man to drag a compliant child around in handcuffs, and action must be taken against this officer.