Thousands of police officers are getting body-worn cameras, there's just one massive problem - The Canary 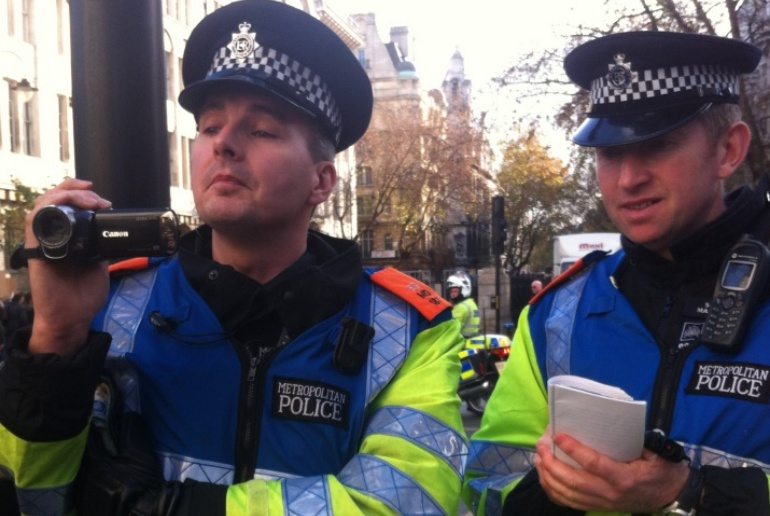 The Metropolitan Police are issuing body-worn cameras to 22,000 front-line officers. The cameras are being touted as a way to improve police accountability, but there is a massive problem. No one is saying what will happen to the reams of data recorded by the units.

All footage from the cameras is automatically logged on a secure server. According to the Met police:

Video not retained as evidence or for a policing purpose is automatically deleted within 31 days.

the investigation, detection and prevention of crime.

The problem is highlighted by the ways police already retain data on political activists. Protesters are routinely monitored and those included on the domestic extremist databases include journalists, politicians and other people without convictions.

Previously, the police have admitted that it only takes two factors to be included on the database. This can include attending several demonstrations and talking to people already on the database. Furthermore, the police will go to extreme lengths to gather this data, including tactics such as stop-and-searches and mass arrests.

Therefore, a legitimate “policing purpose” could include keeping footage of protesters, even if they haven’t committed any criminal acts. As such, with these body cameras, it is possible that the police could gain and keep even more data for possible prosecutions in the future.

Perhaps even more shocking, the police appear unsure which law allows people to request the footage of themselves. According to the Met police website:

If the public wish to view footage taken of them they can request, in writing, to obtain it under freedom of information, data protection laws.

The problem is, these are two different acts with very different criteria. Furthermore, if a person is requesting their own footage, they would not be able to access that data through a freedom of information request. The Information Commissioner’s Office (ICO) makes this clear:

If the information constitutes the personal data of the requester, then it is exempt from disclosure. This is an absolute exemption, and there is no duty to confirm or deny whether the information is held.

The ICO continues, saying that any request for personal data should be made through a Data Protection Act (DPA) request:

Instead, the public authority should deal with the request as a subject access request under the DPA.

But for the police, as their own website suggests, to be unclear on how a person can access their data speaks volumes about their attitudes towards the data they are collecting.

The police can also pick and choose when they turn their cameras on, so it will still not necessarily mean that the many incidences of police brutality will be recorded. And while there are claims that the use of body-worn cameras has led to fewer complaints against officers and more guilty pleas, the Independent Police Complaints Commission said they were “not fit for purpose for firearms incidents”.

We should all want a police force that is more accountable. But a system which can easily be used for mass surveillance, with a police force which does not even now how a person can access their data, is not the answer.