An exhibition marks the 40th anniversary of the Grunwick strikes 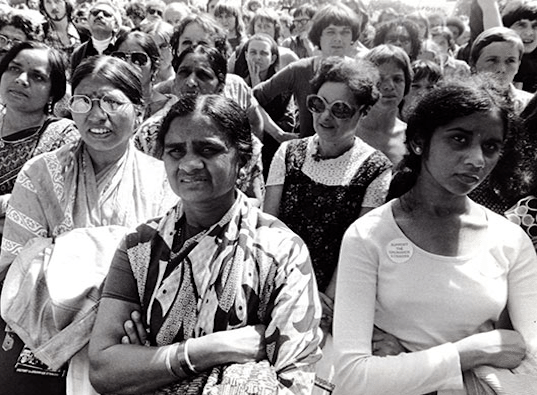 40 years ago, Britain’s capital witnessed a revolt from an unlikely group of South Asian women, working in the Grunwick factory in Willesden Green. A new exhibition tells the story of the strikes, which has influenced future strike action in the city.

We are the lions

What you are running here is not a factory, it is a zoo. But in a zoo there are many types of animals. Some are monkeys who dance on your fingertips, others are lions who can bite your head off. We are the lions, Mr Manager.

The above quote comes from Jayaben Desai, a woman who charismatically led her co-workers to strike action.

It was 20 August 1976 and one of the hottest days of the year. Grunwick was a film processing factory. It processed photographic film and then sent the pictures back by mail order. This was hugely popular in the 1970s, and during the summer the manager Malcolm Alden was keen to process as many films as possible.

But against the backdrop of widespread racism and difficult situations in their country of origin, workers at the factory of mostly South Asian origin were receiving a wage well below the national average and were forced to do overtime.

It was one of these summer days when Desai was about to leave that Alden demanded she stay and do overtime. Three workers had already been sacked and another three had walked out in protest. When she refused to stay he placed her on a formal warning.

Friends listen to this – what is happening to me today will happen to you tomorrow. This man wouldn’t speak to white workers in the way he speaks to us.

1960s and 1970s Britain was used to industrial disputes. and there had been many wins, especially for women. The sewing machinists that went on strike at Ford Dagenham for example paved the way for the Equal Pay Act 1970. There had also been actions against racism. After all, it was common place for Black and Asian workers to be paid less than their white colleagues for manual factory work.

But this was the first time that a trade union had backed their dispute and after 75 workers walked out of Grunwick, the union APEX took them on and paid them £12 per week while they were on strike.

Further support for the strikers came tumbling in through locals, organisations and companies and Grunwick found themselves at the brunt of a boycott. This boycott was one of the most significant events of trade union history as the Union of Postal Workers (UPW) refused to deliver the film that came out of Grunwick.

Management at the factory still refused to meet the workers demands even after a Parliamentary debate and ACAS (an organisation that resolves employment disputes) got involved. Picketing grew but so did police action and many of the strikers were arrested.

Photo by the late Phil McCowan

But that didn’t stop the show of solidarity and postal workers, miners, dockers and steel workers all turned up and joined in the ‘mass picketing’ tactic. This alarmed the government of the time and a court of inquiry was held in 1977 led by Lord Scarman. The resulting report backed the workers claims but this did nothing to help their dispute.

The government placed pressure on the unions and the support finally waned after a two year struggle. It appeared that Grunwick had won.

Photo by the late Phil McCowan 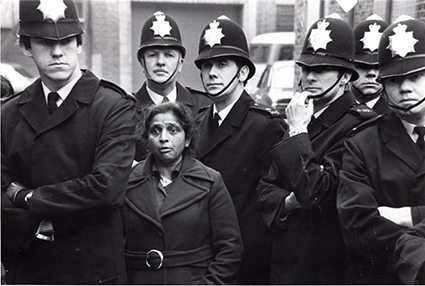 Grunwick was a turning point

But the Grunwick strike shouldn’t be seen as a failure. As the exhibition organisers of Grunwick 40 put it, it was a ‘high point of worker solidarity’. The South Asian community, particularly the women, were viewed as docile and submissive so this was the first time that they were accepted as part of a wider, white dominated trade union movement.

From there, Asian workers were inspired to take action where they saw rights had not been respected. But at the same time, the media coverage of the strike was seen as hostile and fuelled anti-union feeling. This led Margaret Thatcher when she came into power, to impose sweeping changes to change the face of industrial representation in Britain.

We can see today that non-unionised labour is common. Sports Direct, Deliveroo, and the case of the Latin American cleaners in the city who later gained backing from an independent trade union are modern day realities of this. And unfortunately race and gender remain a key factor in poor working conditions.

To paraphrase the exhibition creators’ own words, the key lesson from Grunwick is that we cannot rely on the law. It may be there to protect us but we ultimately have to demand our rights and battle against stereotypes that make us vulnerable.

‘We are the Lions’ brings the story of the Grunwick strikes to life and shows the importance of everyday heroes.

– Attend the conference ‘From Grunwick to Deliveroo’ on 26 November 2016.

– Watch a special film screening of ‘The Great Grunwick Strike 1976-78’ at the School of Oriental and African Studies on 2 November.