Ken Loach needs YOU to help save the welfare state, and one reader's story sums up why - Canary 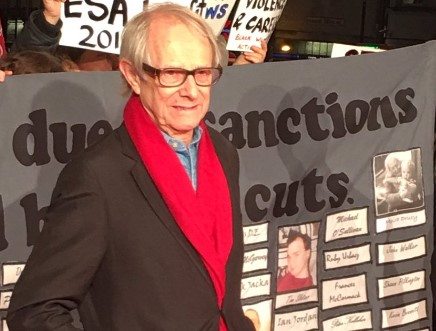 A new campaign has been launched to draw attention to the “demolition” of the welfare state in the UK. Using a famous phrase and sentiment from over 70 years ago, it hopes to raise awareness of the Conservative’s attack on welfare and its recipients. It’s being supported by Ken Loach, director of the film I, Daniel Blake. And one Canary reader’s story shows just why the campaign is so important.

The ‘Cradle to the Grave‘ campaign aims to highlight how the welfare system in the UK is being eroded. Between 2010-2015, the Tories cut £16.7bn from the welfare budget, shrinking it by 7% in real terms. But while pensions, which make up nearly half of all welfare spending, were protected, other benefits were not. Tax credits were cut by £3.9bn; child benefit by £1.9bn; changes to disabled people’s benefits “saved” around £1bn, and by reducing the rate at which benefits rise, the Tories cut nearly £9bn off the overall budget.

13.5 million people live in poverty in the UK; 7.9 million working age adults, 3.9 million children and 1.6 million pensioners. 3.9 million people are in two year “persistent poverty” in the UK; the overall poverty rate has increased to 16.8% and the persistent poverty rate for children is 11%. There are too many people slipping through the cracks in a society which is supposed to be one of the richest on the planet. And between 2015-2020, things are only going to get worse, with forecasts saying that 2.6 million more children will be living in poverty by the end of the decade.

The campaign aims to raise awareness of these shocking statistics. As the organisers of Cradle to the Grave told The Canary:

Over its lifetime the welfare state has provided support to millions of people who had fallen on hard times and provided them with a safety net until their lives were improved across many generations since the second world war. In recent times this has been seen as a negative thing where those needing support are seen as a burden to the state and the taxpayer. It is natural that with people living longer and population growth over the decades that the costs of this has risen since its inception.

As Cradle to the Grave points out, after the financial crisis of 2008 successive governments have imposed austerity. The campaign claims that this is ideologically driven by the world’s richest 1%, to “remove the safety net from the poorest in society” because of a “crisis they did not cause”. They say:

It is our intention as a grassroots movement to make the public aware of what is happening; to prevent our numerous political figures from continuing to remove the safety net needed by so many, and to preserve it for generations to come.

And as a reader of The Canary’s story shows, the safety net is indeed being removed.

John (not his real name) got in touch. He has lived with depression since he was 18, and his diagnosis was recently updated to include the bouts of mania and Bipolar Disorder. John has had to put his studies on hold, and financially rely on the welfare state. He receives a Personal Independence Payment (PIP), which John says “just about covers the food and electric”. Then, to afford anything above the bare essentials, a phone line, internet access, a mobile phone, he relies entirely on Employment and Support Allowance (ESA).

But John’s experience with the Department for Work and Pensions (DWP) and ESA has been far from a smooth ride:

I applied for ESA at the beginning of the year. A month later and my ESA claim was processed and payment began. I was entitled to ESA as my sole income was a PIP, which again, paid for the bare essentials and left nothing aside, so I was deemed deserving. Deserving is a part of the DWP’s lexicon that they wish to extirpate, however, and I soon had to prove myself deserving of £60 a week.

When you are on ESA, you are either put in the Work-related Activity Group (WRAG) or the Support Group. The former is to get people back into work, the latter is for those who are unable to. John was put in the Support Group, due to the nature of his illness. But even then, he says, it wasn’t that simple:

Since being diagnosed with Bipolar Disorder I have been expected to supply evidence each month that I do indeed still have the illness, as if it were some kind of cough that can be cured with Covonia by the weekend. This involves a back and forth with my GP to supply proof the DWP that I am still unavailable for work; which is, of course, the way our society defines illness: the inability to work. This can cause a lot of distress, particularly with my anxiety disorder.

The DWP: not fit for purpose?

John says that on a few occasions his medical certificates, dated to the end of a particular month, have been ‘lost’, or, he claims, “even manipulated to end six weeks early”. And because all communication about medical certificates is done by letter, quite often John finds himself with just one day to supply the medical certificates. When they’re late, you’re sanctioned, which John has been and therefore left with no money:

Worrying about where the next meal will come from, not just for me but for my four-year-old stepdaughter, and my partner, whose sole income is through a student loan, can induce some of the more severe symptoms of my illness. This has happened every single month since the date of my initial claim.

But last week John found out that his ESA claim had been stopped without reason. After phoning the DWP, he was told that due to a change in his partner’s income, he was no longer entitled to ESA. His partner’s income? A student loan, which the DWP deem large enough to cover their living expenses, as well as John’s medical expenses. The student loan is a £4,000, and she receives a grant of around £3,000 for being a mother. Therefore, the DWP deem £7,000 plus John’s PIP enough for a family of three to live on. John says his situation is desperate:

My partner commutes for an hour to and from university, which on public transport can cost upwards of £7 a day. That alone pushes us into debt much of the time. The cost of electric and food, among other basic bills, is just about covered by her loan and my PIP. Any unexpected bills and we’re further in debt. My mental health deteriorates under these levels of stress, and I worry I’ll never be able to stabilise my condition when I am offered no financial stability. The situation is dire.

Running out of time

And it’s people like John, and his “dire” situation, which Cradle to the Grave are aiming to help highlight. The campaign told The Canary:

Our aim is to crowdfund a campaign to get a poster in every town and city to accompany our website. We’re doing this in the hope that the people still believe in what they were told when the welfare state was created; that is, one which is ‘from the cradle to the grave’.

In recent times the welfare state has been under serious threat. It is almost gone and unless people are willing to fight to retain it, we will lose it in the next few years. Then, all we will have is a society where if you can pay you will survive, and if you cannot your chances of surviving are slim. We cannot allow this to continue and return us to Dickensian times.

The situation in the UK is already precarious for so much of the country. With nearly a million people now on zero-hours contracts, wages set to fall while poverty is set to rise, rough sleeping up by 102% this decade, and the financial attacks on disabled people continuing unabated, the UK is quickly turning into a two-tier country of ‘haves’ and ‘have-nots’. But the welfare state, which is supposed to support people in times of need, is failing as well. As John said of his experience:

Uncertainty is what drives the distress. It is the enemy of mental health. It is what feeds into the lives of so many millions, day in day out. It is relentless. It is the difference between managing a mental health condition and surrendering; giving into its horror. This can be fatal. It has been fatal.

You never can tell what is around the corner in life, in the blink of an eye our lives can be turned upside down and you may need to depend on the safety net of the welfare state to support you and your family.

And it’s a safety net each and every one of us should be fighting to save.

– Find out more about the Cradle to the Grave campaign.

– Donate to the campaign.