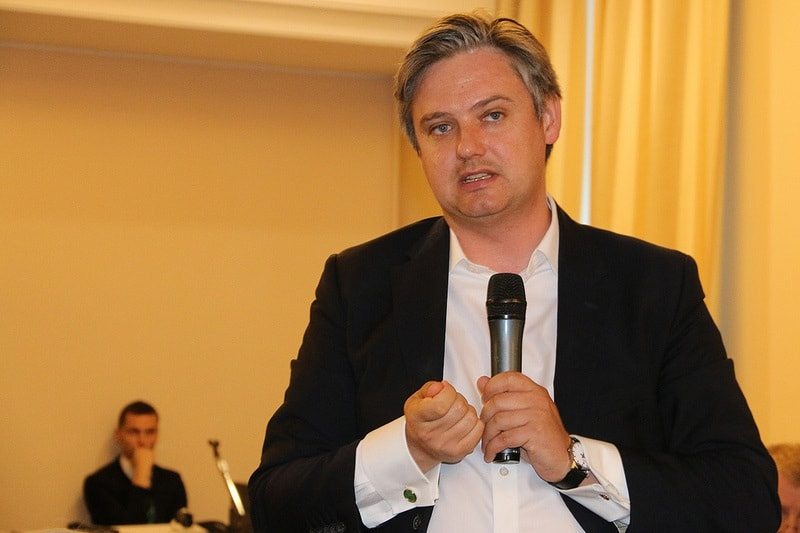 Labour MP John Woodcock has come under attack as he appeared to spread Conservative propaganda on Wednesday 26 October and defend British-made bombs being dropped on Yemeni civilians. Later that day, he joined 102 Labour MPs in abstaining on the party leadership’s call on the government to:

suspend its support for the Saudi Arabia-led coalition forces in Yemen until it has been determined whether they have been responsible for any such violations.

Woodcock attempted to justify the government’s active role in the Saudi-led coalition’s well-documented international law violations. In doing so, he called opposition to it “anti-West posturing”. This appeal to nationalism stank of Conservative rhetoric for many, who took to social media to express their fury:

@JWoodcockMP shamefull stuff. UK arms are proven to have killed Yemeni civillians. And yet you dismiss this all as "anti-west". Pathetic.

You are a disgrace.

Others on social media considered why Woodcock had apparently issued an apology for the Saudi regime’s war crimes:

The arms industry has apparently wined and dined the Labour MP. But Woodcock may simply argue that he was excited about arms manufacturers gaining control of our schools:

Really exciting news about BAE taking on sponsorship of Furness Academy. Good to visit today to discuss their plans with leadership team.

As well as supporting BAE’s involvement in our education system, Woodcock threatened to resign as an MP unless Labour backed the full renewal of Trident nuclear weapons. BAE, Europe’s biggest arms company that earned a profit of £15.4bn in 2014, is set to build the new nuclear-powered ballistic missile submarines.

The MP’s stance on Yemen

Woodcock’s position on the conflict in Yemen continues this trend. Since the bombing campaign began, the UK has sold £3.3bn worth of arms to Saudi Arabia. If government policy will make BAE money, Woodcock will fight the arms company’s corner.

the support we are giving is largely to help train pilots in targeting practices that reduce civilian casualties, trying to influence the Saudis into unambiguous compliance with humanitarian law.

But it appears the government is doing more than training pilots. According to Saudi Arabia’s Foreign Minister:

British and American military officials are in the command and control center for Saudi airstrikes on Yemen… and have access to lists of targets.

While Saudi Arabia has ultimate control over targets, British commanders have direct influence. Despite this, the most comprehensive report on the conflict shows that a third of Saudi Arabia-led airstrikes have hit civilians.

Britain is an important part of the conflict

Yemeni skies have been relentlessly lit up by airstrikes overseen by (and made in) the UK. Open-source data, including research on the ground, records more than 8,600 strikes since bombing began in March 2015 until August 2016. Nearly half of them struck non-military sites. Witnesses estimate that just eight of these strikes could have killed up to 175 civilians.

But Woodcock argues that opposing such a devastating campaign is fuelled by a “momentary buzz of self-satisfaction”. For him, people who are against the UK taking an active role in the bombing of Yemeni civilians is “more gesture politics from the comfort of British dining tables”. Pretty rich coming from Woodcock, who prefers the bombing of civilians at the whim of distant, privileged, and corrupt MPs from the comfort of the British parliament.

Let’s stand up to the arms industry and its parliamentary PR people. Help put an end to the bombing in Yemen.

– Act now with the Campaign Against Arms Trade (CAAT).