The media revolution has begun, but it needs your help to continue - The Canary 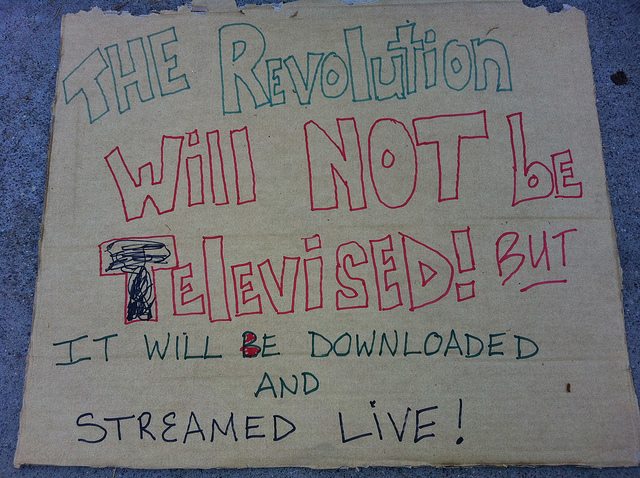 With the mainstream media becoming less and less relevant, and the public crying out for change, the role of independent news sources has never been more crucial. And now, one organisation is trying to amplify the voices of those alternative sources. And it needs your help in continuing the media revolution.

Real Media is a cooperative of independent journalists, dedicated to public interest news and challenging mainstream media distortion. It organises numerous events throughout the UK, and aims to provide an alternative to the currently narrowing window of debate within the mainstream media.

Now, Real Media has launched a crowdfunding campaign called ‘The Media Fund” to financially assist independent outlets. Its goal is to raise £10,000 to cover the start-up costs of the organisation by the time the project goes live on 10 December 2016. The official launch will be at Birkbeck College, London during this year’s Media Democracy Festival. The fund already has numerous organisations affiliated to it (The Canary is not among them). The plan is to let the public become members of the fund, with their monthly subscriptions evenly distributed between the affiliated partners.

This is the first fund focused on addressing the problem of corporate dominance in the MSM [mainstream media]. It will allow alternative national and local media to thrive, to better do their jobs, and to challenge, counter and redress the failings of the corporate press.

The set-up will be fairly straightforward. A media organisation can become a fund member, but only if it is considered of a high enough quality. The outlet will help cover the fund’s minimal overheads; therefore, in return, it can appear on the fund’s list of approved platforms.

The fund will bring alternative media organisations together, to become more than the sum of their parts. We hope to go a long way to allowing them to survive in a competitive market dominated by vast multinational corporations. The fund will also provide the infrastructure for further developments in democratic, cooperative funding of the media. Such as specific funding pots for long form, journalistic investigations and campaigns and training.

Real Media believes that funding for independent journalism has been a perennial problem, in spite of the age of the internet. In addition, it cites that a lack of funding has perhaps had the “biggest impact” upon the “quality and quantity” of independent output. Real Media also says this is a direct threat to journalistic impartiality. And the way the corporate media dominates the UK news should not be underestimated.

A 2015 report found that just seven corporations dominate the UK press, and they own 71% of the entire media establishment. Also, in a recent survey, the UK public thought the British press was the most right-wing and biased in Europe.

But as The Canary previously reported, the mainstream press is in decline:

It was revealed in March that The Sun made a £253m loss as a direct result of declining print sales. Likewise, in 2015, The Daily Express lost over a quarter of its print readers, while 12 other national newspapers also experienced double-digit falls.

And there’s a role for everyone to play in creating a new media.

The potential is endless

Elizabeth Mizon is a former journalist at The Canary who left to concentrate on the Bristol Radical Film Festival. She is also one of the co-organisers of the Media Fund, and said of the project:

There are a number of great online organisations and journalists that already exist. But they all struggle, constantly having to chase funding. This is because the vast majority of online content is free. Working in a mainstream organisation is great in many ways. You get a wage or salary; a platform with a ready-made audience; you get the benefit of your colleagues’ connections. But independent, grassroots organisations and workers don’t necessarily have that.

So we are creating a hub for teams as diverse as Novara, the Centre for Investigative Journalism, openDemocracy and The Dorset Eye, that all do brilliant work already. If they had a constant stream of funding, they could pay their writers more. They could also perform long term investigations, recruit and train people in multiplatform work. The potential is endless.

The hope is that the Media Fund will allow independent outlets to come together to end the stranglehold the mainstream media has. As Real Media said, the “need for independent media in the UK is greater than ever”. Sadly, until independent organisations have the financial backing to challenge the dominance of the corporate media, it is an uphill struggle. But with projects like the Media Fund already looking promising, and outlets like us at The Canary breaking into the top 100 most viewed news sites in the UK – the future is indeed looking bright. The media revolution in the UK has well and truly begun.

Note: The Canary is not affiliated to The Media Fund.

– Write to your MP, asking their view on corporate monopolies.

– Read more on today’s media and The Canary‘s role here. If you appreciate what we do, please consider supporting us.