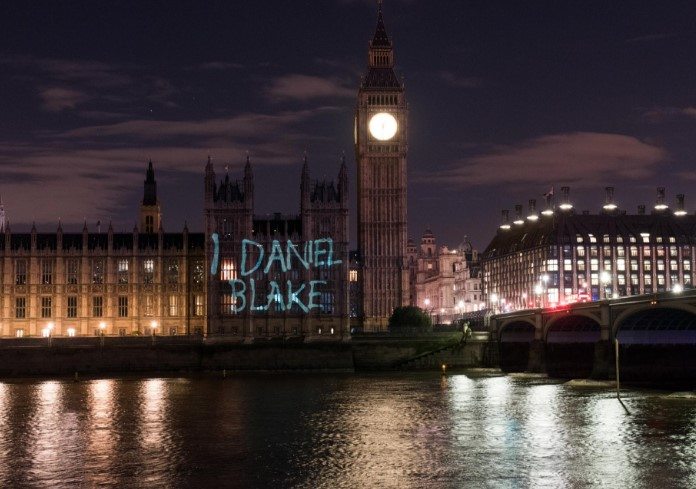 Ken Loach has slammed the Conservative government for its “brutal attacks on vulnerable people”. The director, whose film I, Daniel Blake is in cinemas now, criticised the government for “conscious cruelty” towards deaf and disabled people through cuts to support and welfare reforms. And he was scathing about the government’s further planned cuts to welfare payments.

Loach’s statement was read at a memorial held on 16 November for the late Debbie Jolly, co-founder of Disabled People Against Cuts (DPAC), who died suddenly following a short hospital stay. On the same day, Shadow Chancellor John McDonnell paid tribute to Jolly’s work in parliament:

At the memorial event, DPAC also protested against the government’s planned cuts to Employment and Support Allowance (ESA) and Universal Credit. The Conservatives are planning to slash £30 a week from people who receive ESA in the “Work Related Activity Group” (WRAG) who have had a Work Capability Assessment (WCA).

But DPAC points out numerous faults with the proposed cuts, being debated in parliament on 17 November, saying:

And Loach said of the cuts:

The attacks on deaf and disabled people have not happened by accident… Why should people who have to cope with such difficulties have to live in poverty? [But] the conscious cruelty of government policy is something else. The WCA is there to frighten people so they will look for work they cannot do. The cuts to social care have devastated people’s daily lives. Another £29 is to be cuts from ESA. How are people expected to live? MPs charge that amount of money on their expenses for breakfast.

Loach also slammed the government’s inadequate response to a UN Human Rights Committee report, which condemned the UK government for “systematic” human rights abuses over its treatment of disabled people. That report found what it called “grave” and “systematic” violations of international conventions the UK has signed up to.

Loach said Secretary of State for Work and Pensions Damian Green’s response was to:

Ignore the report. Pretend it doesn’t exist. And carry on with his brutal attacks on vulnerable people.

We must now stand together

In a speech to a Unite the Resistance conference on Saturday 12 November, Nicola Jeffery from DPAC said of the UN report:

We must now stand together, not as individuals, divided unions or split political parties. We call on the government to take seriously the UN report; demanding that it stop the violations and end welfare reforms now.

For disabled people, this is one of the most worrying times in decades. The Tories are cutting their support; they are suffering relentless attacks from the government; and hate crime is rapidly rising. Disabled people are bearing the brunt of the Tories’ austerity agenda. But with support from the likes of Loach, McDonnell, the UN and others, the fight for disabled people’s most basic rights will continue. And with groups like DPAC leading the cause, it is a fight that hopefully can be won.