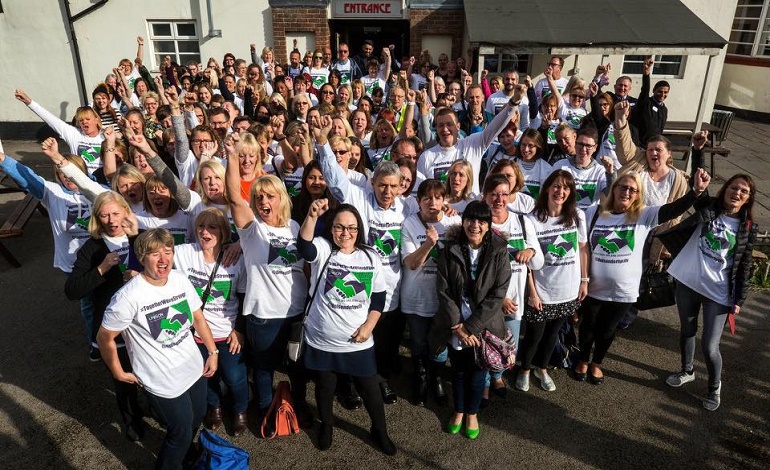 A Labour-led local authority has come in for damning criticism for trying to cut up to £500 a month from some of its staff. Teaching assistants in Derby have seen the council cut their pay by 25%.

The council has given numerous offers to Unison members. Including offering £1,000 in compensation to each teaching assistant affected. Its latest offer, in November, was a £1.1m package, which included £500,000 for schools to pay for more hours for support staff. It would give headteachers the remaining £600,000 to create a ‘task force’ to help them find the extra hours. And some money would also have been for training teaching assistants.

But Unison also rejected this offer, as many members could not work the extra hours required to top up their pay. So on Monday 16 January, five days of industrial action by the teaching assistants began. Along with lunchtime supervisors and administration staff, they are on strike between 7am and 1pm each day. The Derby Telegraph said that Unison’s strike action had affected 16 schools.

Support staff were out on strike days, raising awareness among the public of their treatment by the Labour council:

Our School Support Staff are out and about in the city centre come and say hello to find out more#togetherwearestronger@unisontweets pic.twitter.com/mGNVbGpNBs

Wait… Labour did what?

But the council has made a controversial move to try and limit the impact of the union’s action.

The Canary has seen a leaked memo from the Labour-led authority to headteachers on 11 January. And it states that schools could fill the gaps left by the strike with “volunteers”. But the council did not say that the volunteers must have a Disclosure and Barring Service (DBS) check. It only said it would be “advantageous” if they did. The council also said that any volunteers must be “supervised” at all times. And Unison has questioned the legality of this move.

The council continues to work with head teachers and governing bodies to look at different options to ensure that as many of Derby’s children continue to receive the uninterrupted education that they deserve. All advice complies with legal requirements and both the council and the schools’ leadership teams are mindful that any arrangements must fully meet our safeguarding responsibilities.

Ironically, this comes after a Labour councillor accused Unison of having a safeguarding issue with its strikes. After Unison members were seen giving stickers to school children on one of its picket lines, Sara Bolton, Safeguarding Cabinet member, said:

We ask [Unison] to refrain from this practice with immediate effect as this is deemed to be wholly inappropriate and unacceptable… It is my responsibility to ensure our children are safe at all times.

And this is not the only area where a Labour council is treating teaching assistants in this manner. As The Canary has previously reported, the same thing is happening in Durham.

Both Labour councils claim that central government cuts have forced them to cut teaching assistants’ pay. Yet somehow, 191 council executives in Derby manage to earn more than £50,000 a year. The authority’s Chief Executive, for example, earns £161,600. And these civil servants will be getting a pay rise this year. While teaching assistants, part of the backbones of the education system, have to fight for a liveable wage.

Perhaps many Labour councillors and executives have forgotten what leader Jeremy Corbyn said in 2015: “An injury to one is an injury to all.” Or maybe they were too busy counting their pay packets at the time.

The Canary contacted Derby City Council for comment but received no reply.