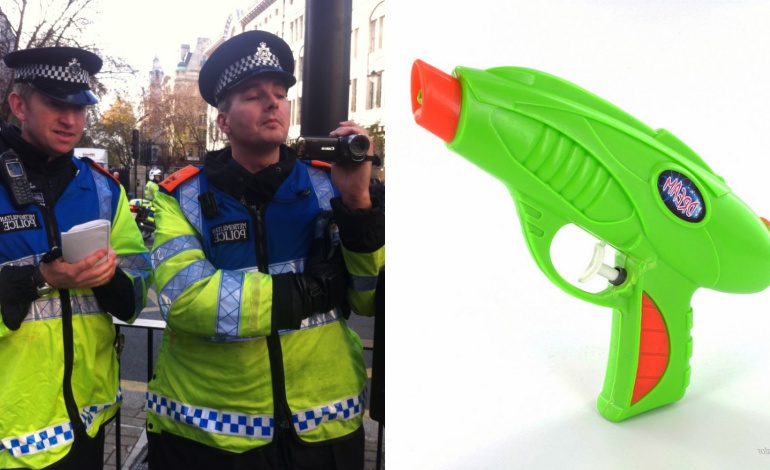 A teacher reported the two brothers, aged five and seven, under the school’s Prevent duty. Since Prevent became a statutory duty [pdf] for all schools in 2015, it has caused confusion over what should and should not be reported. And it has led to some ridiculous cases. Such as a four-year-old boy being reported for mispronouncing the word “cucumber”.

And in this case, the teacher claimed she didn’t doubt that it was a toy. Regardless, the school called the police, who questioned the boys. The police didn’t find any problems, and returned the children to their mother.

Bedfordshire Police said they were called after “reports of concern for safety”. And that the visit:

was not in a Prevent capacity, but routine police attendance, and the officers were only present for a short time.

The day after the visit, teachers also spoke to the mother. She said they expressed concerns that her eldest son was speaking Arabic in class:

But the boy’s mother also argued that the school was discriminatory. The children are of mixed Indian and Middle Eastern heritage. And she said the school would have ignored a white child saying the same things.

And the school’s governors agreed. They found that the school used “a degree of racial stereotyping”. Their mother brought a further legal challenge against the school. And Central Bedfordshire Council admitted both ethnic discrimination and human rights breaches. It subsequently paid damages to the family. It also apologised to the family, and said:

All schools receive regular training on the Prevent strategy to ensure that any potential incidents are dealt with sensitively and appropriately. Prevent referrals in Central Bedfordshire are falling due to school staff being more confident about how to handle incidents, so only the most serious, which cannot be dealt with at a local level, are referred.

The local education authority also changed its guidance to schools. It removed a mandatory clause saying any concerns need to be reported to police, and staff can now exercise their professional judgment in dealing with any cases.

But it is the impact that is truly heartbreaking. The brothers subsequently moved schools after the eldest told his mother:

I don’t want to say the wrong thing, the teacher will call the police again.

And she said the incident had made the boys withdrawn and frightened and scared to speak other languages. She said she overheard her eldest son speaking to his brother:

He said: ‘You can’t say foreign words at school, because you don’t know who you can trust.’ I remember being gutted and thinking: what has happened to my children? Can I not even discuss elements of their culture that they should be celebrating?

Their mother further stated that, even if teachers are “frightened” about potential terrorism, they need to remember who they’re dealing with:

These are children we are dealing with. They are not collateral damage in the war against terror. They are little, tiny children who are completely formed by what happens to them. And if you treat a child like that because you are scared, then the problem lies with you, it doesn’t lie with them.

As previously reported in The Canary, huge problems exist in the way schools define extremism and radicalisation. Many define radicalisation as:

The act or process of making a person more radical or favouring of extreme or fundamental changes in political, economic or social conditions, institutions or habits of the mind.

Speaking to The Canary, Kevin Blowe, the coordinator of Netpol (the Network for Police Monitoring – which started the ‘Together Against Prevent’ campaign), said:

When Prevent became a statutory duty for all public bodies in 2015, we warned it risked creating an army of staff ready to point the finger at the most innocent of activities involving young Muslims or anyone expressing political opinions. This happens on the dubious justification of ‘safeguarding’ children from alleged ‘radicalisation’. But safeguarding them from what? From the toys they are given?

And Blowe argues that the strategy is causing more harm than good:

There seems little thought about the long-term damage these repeated wrongful allegations is causing. Constantly placing the lives of Muslim children under a magnifying glass is likely to widen splits between Muslim communities and wider society in the UK. Arguably, it is making the prospect of support for religious extremism worse.

The majority of this strategy is aimed at the Muslim community. It has an alienating effect of a community already experiencing discrimination and rising hate crime.

Prevent needs abolishing. It is a racist, discriminatory strategy that does more harm than good. This case shows the racist way it is implemented, and the horrific impact it can have on very young children. If we truly want to live in a cohesive society, then this strategy is doing the opposite. We must all work together to get rid of it.

– Support the Together Against Prevent campaign.