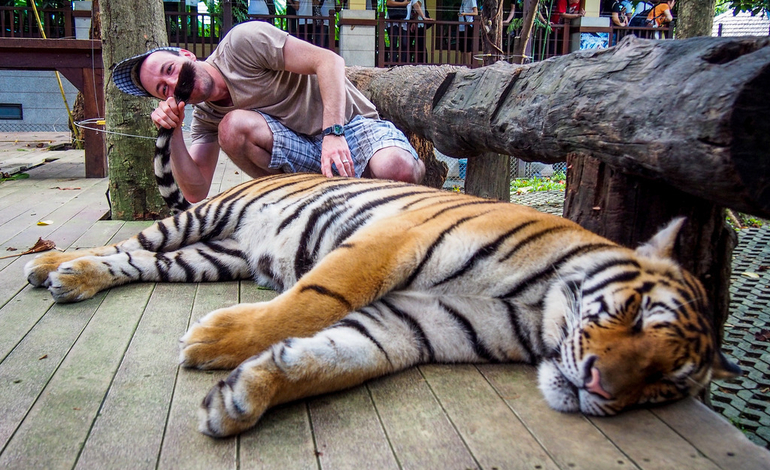 Tourists in Argentina have killed a baby dolphin. And it was all for the sake of taking a selfie. The same thing happened last February in Argentina. Tourists killed a La Plata dolphin on a beach in the resort town of Santa Teresita. They passed the animal around while vying for selfies. Eventually it died of dehydration.

Social media bringing out the worst in people

In the Argentinian paper La Capital [Spanish], one observer said:

They let him die. He was young and came to the shore. They could have returned him to the water—in fact, he was breathing. But everyone started taking photos and touching him.

But these cases in Argentina are not isolated incidents. Many other animals, all over the world, suffer harm for the sake of photos to share on social media.

Tourists mishandled two peacocks when taking selfies, resulting in the death of the animals. A man at Palm Beach in Florida dragged a small shark out of the water in order to take a selfie. Tourists snapping selfies in Costa Rica are stopping endangered sea turtles from breeding. And there is a dark side to those ‘cute’ viral videos of slow lorises.

Many tourists see wild animals as exotic and adorable objects, as props for photos and nothing more. Social media highlights our tendency to view animals as merely things to be used, and often for the most trivial reasons. Selfies taken with wild animals and posted on Instagram may appear innocent and cute. But cruelty lies behind the images.

The death of the baby dolphin in Argentina may be morally wrong for reasons that go beyond the creature’s sentience (e.g. its ability to feel pain and fear).

Some researchers believe that dolphins should be recognised as ‘non-human persons’. Ethics professor Thomas White says:

The similarities between cetaceans [dolphins, whales and porpoises] and humans are such that they, as we, have an individual sense of self.

Research carried out by Diana Reiss of Columbia University and Lori Marino of Emory University appears to demonstrate dolphin self-awareness.

At the American Association for the Advancement of Science (AAAS) conference in 2012, researchers showed support for a Declaration for Rights for Cetaceans. The Declaration states that “every individual cetacean has the right to life”. And “no cetacean should be held in captivity or servitude; be subject to cruel treatment; or be removed from their natural environment”.

But it hasn’t all been bad news in Argentina for animal rights. As previously reported at The Canary, an Argentinian judge ruled that chimpanzees have rights. And in another landmark ruling in Argentina, the judge recognised an orangutan in Buenos Aires zoo as a non-human person.

And social media can also play a positive role when it comes to protecting wild animals. For example, local reporters posted photos on Twitter of 40 dead tiger cubs found at Thailand’s Tiger Temple. Also, travel blog posts – shared widely on social media – had previously pointed out the dark side to posing next to a tiger for a #wanderlust photo.

Cruelty towards animals is not just wrong in itself. This kind of behaviour may make people more cruel in general. The German philosopher Immanuel Kant said:

He who is cruel to animals becomes hard also in his dealings with men. We can judge the heart of a man by his treatment of animals.

The Canary recently reported on the Tory councillor who made offensive comments to a woman while fox hunting. People’s insensitivity towards animals can often be an indicator of their insensitivity towards people. Our encounters with animals should be characterised by wonder and respect rather than grasping for a selfie.