Theresa May is being asked to resign, after disgracing Britain in front of the entire world [VIDEO] - Canary

Theresa May is facing calls for her resignation as Prime Minister. As leaders of the EU and the world joined in condemnation of President Trump’s dangerous policies, the UK Prime Minister was quite literally holding his hand. In doing so, she disgraced Britain in front of the entire world, and she has no place in Number 10 Downing Street.

Theresa May, Trump, and the transatlantic love affair

Theresa May arrived in the US last week, the first foreign leader to meet the new US President. But only because other world leaders are keeping their distance. May gave a speech to the Republican Congressional Retreat so fawning of the American President that one Congressman inquired as to whether she was Trump’s long-lost sister.

Further embarrassment came at a joint press conference. May once again saluted a President who has made repeated racist, sexist and otherwise indecent comments, and is now turning them into domestic policy. She also stated that the President had been invited to make a full state visit to Britain later in the year.

The BBC‘s Laura Kuenssberg was left to serve as the voice of Britain. Kuenssberg left the President visibly rattled after putting forward concerns over his plans for a border wall with Mexico and a ban on Muslim immigrants.

Later, images were released of the Prime Minister walking hand-in-hand with the US President on a tour of the White House. 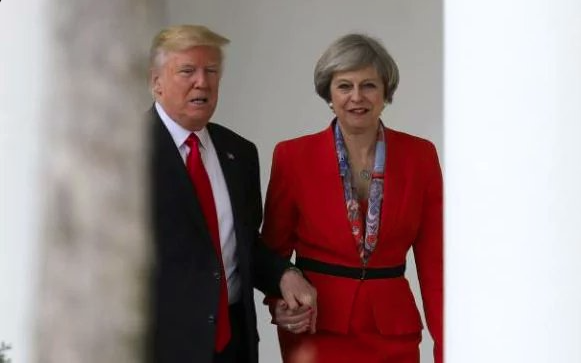 Despite all this, not a single US newspaper put May’s visit on the front page. She also walked away without the much-lauded trade deal. It was a manifest and humiliating failure.

President Trump’s Muslim ban went into effect the very next day. The President’s Executive Order bans entry to the US for citizens from seven Muslim-majority countries. The ban has affected those with green cards. Even those who have been resident in the US for decades will be banned from returning home from foreign holidays.

The list of banned countries includes Iraq, Syria, Yemen, and several other countries the US is actively engaged in bombing at the moment. Leading to accusations that America is happy to make the mess, but not to clean it up. It is also worth noting that there has not been a single terror attack committed on US soil by a refugee.

Conversely, Saudi Arabia is not on the list, despite being the home of all 19 hijackers on 9/11.

Muslims returning home from holidays, or making their first trip to the US having secured a visa, found themselves interned at US airports on Saturday 28 January. They included a 5-year-old Iranian boy who was detained for hours without a guardian present, and an Iraqi interpreter who helped US forces during the invasion of Iraq.

Despicable that a 5 YEAR OLD was detained for HOURS away from his mother. America, we are better than this. https://t.co/6GxLJs9YL5

Just to be clear: Iraqi refugee held in cuffs for 17 hours at JFK before being allowed in was an interpreter for US troops during the war.

Across the US, thousands of citizens rallied at airports to call for the release of those interned by Trump’s Executive Order.

BREAKING: Riot police have arrived at #SFO. We are shutting this airport down. #MuslimBan #NoBanNoWall #laxprotest pic.twitter.com/DVegqqx9oA

The American Civil Liberties Union (ACLU) sued Donald Trump over the ban and sent lawyers to represent the interned. Americans have now donated over $19m to the ACLU to support their efforts.

While a federal judge has been able to stay Trump’s order for now, there is no guarantee of what happens at the next stage. Some border agents have also ignored the federal court order.

Condemnation of the ban began to pour in from concerned leaders around the world. Theresa May, meanwhile, was in Turkey, attempting to secure a trade deal with another world leader in the throes of becoming a dictator. President Erdoğan is rapidly dismantling Turkey’s secular democracy in favour of an authoritarian system. He has been jailing civic leaders, journalists, and other opponents.

While cheering an arms deal with the tyrant at a new press conference in Turkey, May repeatedly refused to condemn the US President for his Muslim ban.

The response was swift and furious at home, with people calling on Theresa May to either change her position or resign.

Theresa May should come out against these executive orders, apologise to British Muslims for not doing so earlier and resign.Truly shameful.

Gave May the benefit of the doubt on that speech, but her refusal to condemn Trump's anti-Muslim visa policy is abysmal.

"Well, Germany is responsible for Germany's policy on Jews…"

More than a million people and counting have signed a petition calling for President Trump’s state visit to be cancelled. MPs from all parties have joined the call.

I don't care how special the relationship is, some lines just shouldn't be crossed

.@TimFarron says that the offer of a state visit to the UK to @POTUS should be withdrawn #Ridge https://t.co/guqPfN9gNu

They think it’s all over…

The leaders of France, Germany, Canada, Mexico and elsewhere have condemned Donald Trump’s Muslim ban in no uncertain terms. In fact, sports company Nike put out a stronger statement of condemnation on behalf of athlete Mo Farah, who was facing being unable to return to his family in Oregon.

Against this backdrop, the Prime Minister is being derided on social media as Theresa The Appeaser, and Appeaser May.

The Pope has condemned Trump's immigration ban, #TheresaTheAppeaser refuses to upset her new best mate. I'm so embarrassed to be British…

Free trade in our time…#TheresaTheAppeaser is trending on Twitter. pic.twitter.com/RgU23xqZIn

Then you know what to do.

Theresa May has disgraced Britain before the entire world. She has no place in Number 10 Downing Street.

– Join the emergency demonstration against the Muslim Ban at 6pm Monday 30 January.