The UK rallies against Trump, all the while missing one of the most important petitions [OPINION] - Canary 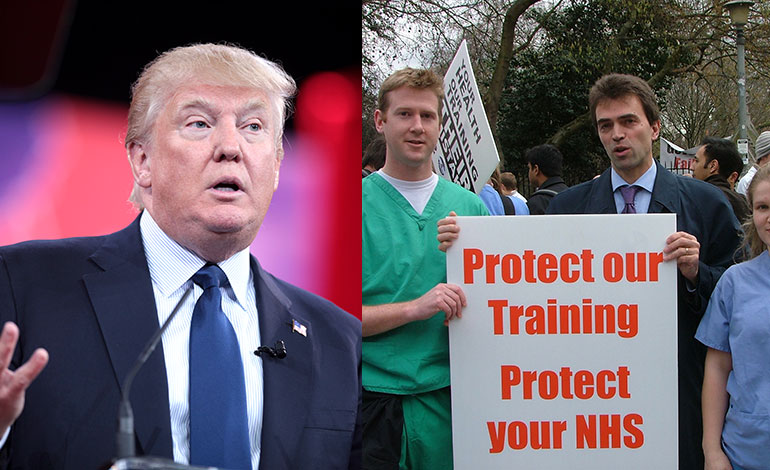 The Prevent Donald Trump from making a State Visit to the United Kingdom petition has gone viral. It’s been plastered across every media outlet, shared on every Facebook feed, and talked about across the country. And it’s now been signed by well over a million people and become the second most popular petition to parliament of all time.

But while thousands of people are protesting his visit, another petition is being desperately ignored. The campaign to save our NHS.

The petition against Trump’s state visit was launched in November 2016 and gained only 372 signatures in two months. But since 28 January, when Trump announced a ban on Muslims from seven different countries visiting the US, the petition has gained over a million signatures.

Donald Trump should be allowed to enter the UK in his capacity as head of the US Government, but he should not be invited to make an official State Visit because it would cause embarrassment to Her Majesty the Queen.

Major media outlets including The Guardian, The Telegraph and The Independent all reported on the success of the petition. The Twitter hashtag #BanTrumpFromUK, meanwhile, went viral on 30 January.

Although it’s fantastic to see the country unite, it’s also a little frustrating to see arguably more important issues being side-tracked and ignored.

Petition to save the NHS

Just before the petition against Trump went viral, another official petition was launched— the campaign to Ringfence the NHS from trade deals.

As the UK leaves the EU, the NHS should not be used as a bargaining tool in trade negotiations and deals with other countries.

Unlike Trump’s petition, this one has received next to no media coverage and barely any support. In one single hour on 30 January, the petition against Trump received 46,734 signatures. The petition to save our vital NHS received only 1,314.

NHS and the US

On 27 January, The Canary reported on Theresa May’s visit to the US. Before her visit, May repeatedly refused to answer questions about US privatisation of our NHS.

This led many to speculate the NHS would be used as a bargaining tool in a trade agreement with the US. An agreement that would destroy the NHS we know and love, and one that would feed profits into the hands of greedy privateers.

While it is extremely worrying that May did not rule this possibility out, it’s equally troubling to know the chief of our NHS used to lobby for US private health care companies.

Before becoming the chief executive of the NHS in 2014, Simon Stevens worked in senior positions for the United HealthCare Group (UHC).

During his time at UHC, it was the subject of a class action lawsuit filed by the American Medical Association (AMA). The AMA accused the company of using faulty claims data to underpay doctors and overcharge patients. After a finding that patients had been victims of “consumer fraud”, UHC was forced to pay £285m in compensation.

Afterwards, in 2011, Stevens became heavily involved in the Alliance for Healthcare Competitiveness (AHC). The AHC is a US healthcare lobby group which rallied for the Transatlantic Trade and Investment Partnership. It aimed to force state-run health systems to employ private health firms from the US.

The future of the NHS is in the hands of these money-minded individuals. And that’s why this particular petition is so important.

When it comes to petitions or fighting campaigns, it certainly isn’t one or the other. Both of these petitions are important. But the country appears to be uniting around Trump’s trivial visit to see the Queen while failing to act on the injustices in the NHS.

And this isn’t the only occasion. In the top five most popular petitions, the NHS doesn’t even get a mention. Trump’s visit, however, features twice. The only prominent petitions for the NHS were two seeking a vote of no confidence in Jeremy Hunt. Collectively, they reached 600,000 signatures in their six-month duration.

Trump represents everything the UK needs to unite against, but let’s make sure we don’t forget our true battle. His visit to the UK may be shameful, but the fall of our NHS will have much bigger consequences.

–Sign the petition to Ringfence the NHS from trade deals.

–Write to your MP about the injustice in the NHS.