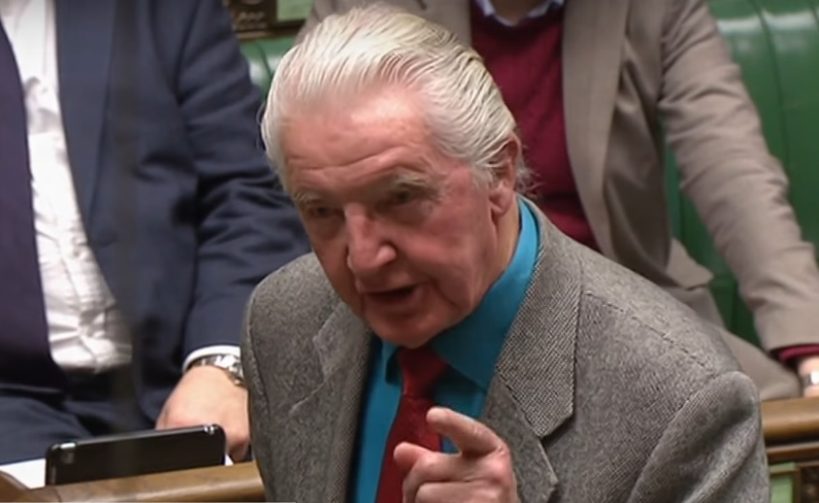 Legendary MP Dennis Skinner just used a powerful personal message to highlight the dangers of appeasing “fascist” Donald Trump. And he opened both barrels on the new US President.

Just days after a previous critique of Trump, the 84-year-old Bolsover MP recalled his own childhood during the Second World War to make an even stronger point. Responding to a statement from Boris Johnson on recent changes to US immigration policy on 30 January, Skinner said [emphasis added]:

Will the Foreign Secretary, just for a moment, try to recall along with me as I hid underneath the stairs when two fascist dictators – Mussolini and Hitler – were raining bombs on towns and cities in Britain. Now this government’s hand in hand with another fascist – Trump. And what I say to him: do the decent thing and ban the visit. This man is not fit to walk in the footsteps of Nelson Mandela.

At the end, Skinner was probably referring to the former South African President’s visit to parliament in 1996. On this occasion, Mandela said:

Racism is a blight on the human conscience… The millions of graves strewn across Europe which are the result of the tyranny of Nazism, the decimation of the native peoples of the Americas and Australia, the destructive trail of the apartheid crime against humanity — all these are like a haunting question that floats in the wind: why did we allow these things to happen?

Having the courage to speak out

Since Theresa May’s visit to the US on 27 January, over a million people have signed a petition against President Trump’s planned state visit to the UK later in 2017. Skinner was also calling on the government to ban this visit. This call comes in the wake of Trump’s crackdown on visitors and immigrants from a number of Muslim-majority countries.

And Skinner wasn’t the only MP to criticise the Conservative Party’s apparent appeasement of Trump. Yvette Cooper, who chairs the Home Affairs Committee, said that simply distancing Britain from Trump’s controversial immigration policies was “not good enough”. She insisted:

For the sake of history, for heaven’s sake have the guts to speak out!

The Prime Minister, however, has insisted that she’s still “very happy” to host the US leader.

Who really needs a history lesson?

Foreign Secretary Boris Johnson told parliament on 30 January that MPs had “needlessly demonised” Trump, and that comparisons with 20th century fascist leaders “trivialised the holocaust”. He also insisted that “it’s in our interests to work with our American friends and partners to show our disquiet where that is appropriate”. And responding to Dennis Skinner’s comments about “fascist” Trump, he said:

I hesitate to say it, but the honourable gentleman’s memory must be at fault if he thinks Mussolini rained bombs on this country.

But his critique of Skinner’s memory may have been premature. As the Royal Air Force Museum website details, Italy did in fact bomb the UK. It formed the Italian Air Corps (Corpo Aereo Italiano/CAI) in 1940 to support the Nazis’ Battle of Britain. And these CAI operations ran from October 1940 to February 1941.

Is Dennis Skinner right? Is Trump a fascist?

The word fascism has long followed Trump around like a bad smell. In 2015, Slate Magazine’s Jamelle Bouie argued that the best political label for him was “fascist”, mainly because he displayed several fascist hallmarks. These included: a cult of ‘action’ where “thinking is a form of emasculation”; an intolerance of critics; a profound fear and distrust of what is “different”; a nationalist identity based on one’s country being attacked from both the inside and outside; a “popular elitism” driven by “contempt for the weak”; and a celebration of aggressive masculinity. One New York Times columnist, meanwhile, suggested Trump was “a latter-day Mussolini”. And the comparisons have continued ever since.

Before November’s elections, Trump already had the support of white supremacists like the Ku Klux Klan. And since his victory, alleged supporters have engaged in numerous acts of racism and misogyny. They have also bestowed Nazi-style salutes upon their new leader.

Dennis Skinner is just another voice highlighting the worrying overlap between Trump and the rising global tide of fascism. And he’s right to do so. It’s a connection we all need to be wary of.

– Read more from The Canary on racism and fascism.