While the UK united against Trump's ban, one Tory MP dragged us down to the gutter - Canary 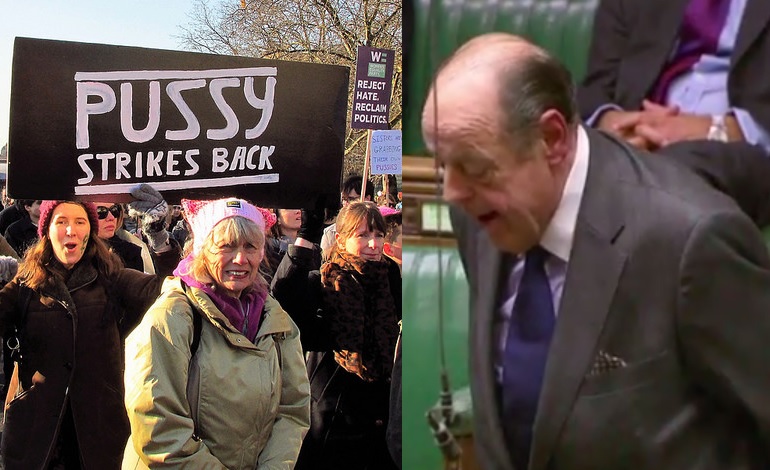 On 30 January, citizens across the UK staged protests against Donald Trump’s travel ban. Parliament also held an emergency debate on the issue. And MPs agreed unanimously to call for a repeal of the ban.

Yet, during the debate, Mid Sussex MP Nicholas Soames dragged our nation down to the gutter. And his actions perfectly showed exactly what some politicians have in common with the new Trump administration.

During the lengthy parliamentary debate, SNP MP Tasmina Ahmed-Sheikh spoke. She condemned Trump’s executive order banning citizens from seven Muslim-majority countries entering the US for a 90-day period. And while she was addressing parliament, Soames “woofed” at her:

His interjection did not, however, go unheeded. Ahmed-Sheikh raised his ‘woof-woof’ remarks in the session. She said:

I understand that Sir Nicholas, who has always afforded me courtesy and respect, was making sort of ‘woof woof’-sounding noises to what I was saying, which I find of course extremely disrespectful.

Soames admitted to the response, and explained:

I thought that in her question to the Foreign Secretary she snapped at him a bit at the end, so I offered her a friendly canine salute in return.

No offence was intended and I apologise to the Honourable Lady if she was offended.

Soames’ apology is notable. He expressed remorse at the offence taken by Ahmed-Sheikh. But he did not ‘intend’ to make offence so, presumably, he does not believe insinuating that a woman is a dog is rude. In fact, he believes it’s a “friendly” gesture.

This is exactly the same sort of characterisation Trump has used for women too. He described one woman as having the “face of a dog”, and another as an “animal”. The only difference being that, unlike Soames, he didn’t frame his remarks in cordiality.

In his proposed introduction to Animal Farm, George Orwell spoke about censorship in the UK. He explained that there is conformity in the media landscape because there is a tacit understanding that “it wouldn’t do” to mention certain things. He wrote:

At any given moment there is an orthodoxy, a body of ideas which it is assumed that all right-thinking people will accept without question.

It is not exactly forbidden to say this, that or the other, but it is ‘not done’ to say it

Soames’ outburst is a prime example of this “right-thinking”. His insulting high jinks are supposed to be tolerated. And what ‘wouldn’t do’ in this instance is for Soames to apologise for the slur, rather than the fact that it caused offence.

Because then the boys’ club that is (still) parliament might have to change their jolly ways. And where’s the fun in that, old chap?