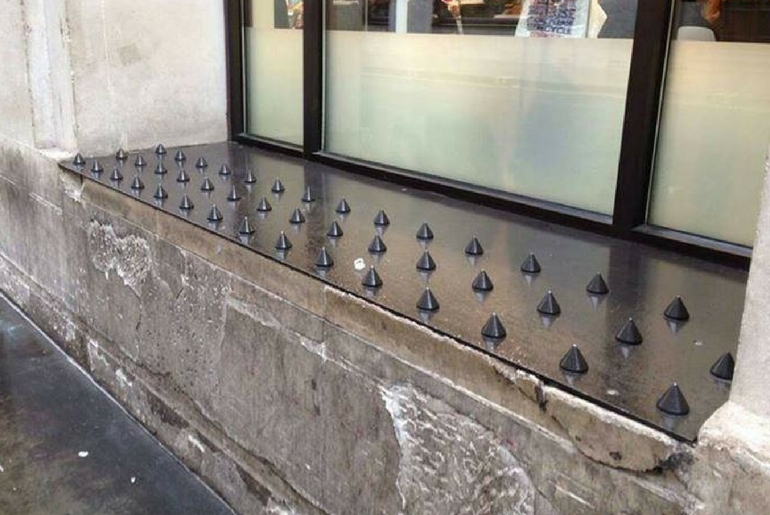 With bad news after bad news, it can be easy to forget that there’s good in the world too. A Manchester mum and her two sons are here to remind us of that. Angry at anti-homeless spikes placed outside a building in the city, the family used cushions to make a very important point.

Jennie Platt says she had a “right bee in her bonnet” after hearing that the spikes had been placed outside a commercial building in Manchester. After watching George (11) and Sam (10) play rugby, she recruited some of the other boys and they went to do something about it.

The group bought piles of pillows and placed them over the spikes. They also left sandwiches and chocolates, and a note encouraging those who need it to “take a seat and a bite to eat”. The spikes were installed in a space outside the building that was under cover – perfect for any rough sleepers who might want to shelter from a cold and wet winter.

Platt accused the owners of the building, GVA, of “treating human beings like pigeons”. From spikes to fines, treating homeless people like vermin is nothing new.

It’s especially cruel given that the latest figures show rough sleeping in Greater Manchester has risen by 41%. Numbers have quadrupled since 2010. At the same time, government figures released on 28 January 2017 suggest that five families a day are being made homeless every hour in England. It’s a problem that’s getting worse, not better.

Deterrents were installed on a small area off Marsden Street on Friday 27 January. These deterrents were removed within 48 hours.

The Canary couldn’t reach GVA for comment, but such a turnaround suggests something changed their mind. It is hard to imagine that the actions of Platt, her sons and their friends went unnoticed. The message the group sent out is clear: punishing homeless people doesn’t make homelessness go away. But compassion might just make a difference.

Read more from The Canary about homelessness here.