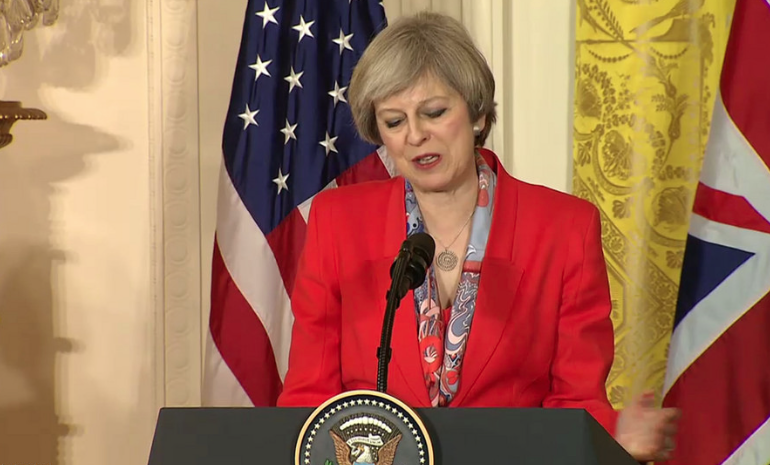 Theresa May has already humiliated Britain on the international stage. At a time when other world leaders are spurning the renegade US President, May’s fawning visit was an undignified spectacle. But after news came that Trump’s team had issued a bizarre threat to the Royal family, May has once again failed to stand up for Britain.

According to a report by The Sunday Times:

Donald Trump is engaged in an extraordinary diplomatic row with the Prince of Wales over climate change that threatens to disrupt his state visit to the UK.

The new president is reluctant to meet the prince when he comes to Britain in June because of their violently divergent views on global warming.

Members of Trump’s inner circle have warned officials and ministers that it would be counterproductive for Charles to ‘lecture’ Trump on green issues and that he will ‘erupt’ if pushed. They want the younger princes, William and Harry, to greet the president instead. Royal aides insist that he should meet Trump.

Senior government officials now believe Charles is one of the most serious ‘risk factors’ for the visit.

This is an unprecedented affront to the British monarchy and government. It is unheard of for the White House to brief against the UK establishment prior to a state visit.

And in the face of this, total silence from Number 10.

This week, the UK parliament voted unanimously to oppose the Muslim ban of US President Donald Trump. The May government now finds itself alongside UKIP and fascist groups like Britain First as the only voices in Britain backing the ban.

The leaders of the opposition parties were united in their condemnation of the ban, and of the decision to host a state visit for the US President while the ban remains in place.

For those asking my view on US State visit: would be wrong for it to go ahead while bans on refugees & citizens of some countries in place.

No-one should be barred for who they are, where they are from or who they pray to. Liberals must keep calling out @realDonaldTrump

And resistance to Trump isn’t restricted to the corridors of power in Britain. It is a popular fight on the streets.

More than 1.7 million people have signed a petition calling for the cancellation of Trump’s planned state visit to the UK. And with just a day’s notice, massive protests filled UK cities on Monday night to defy the President, and May’s complicity.

Hard to estimate, but about 1000 people here in Glasgow I'd say
Certainly biggest demo in this spot I've seen #MuslimBanprotest pic.twitter.com/dAUexiTSkH

It’s time to stop the love-in

The impression is forming that a Brexit-induced desperation has come over the Prime Minister. It has reduced foreign policy to little more than securing and signing trade deals with whoever has a pen. It’s a disaster for the Prime Minister, but a greater tragedy for Britain.