May says protesting against Trump is an 'insult'. Corbyn tells the PM where to shove it [VIDEO, TWEETS] - Canary Workers’ Co-op 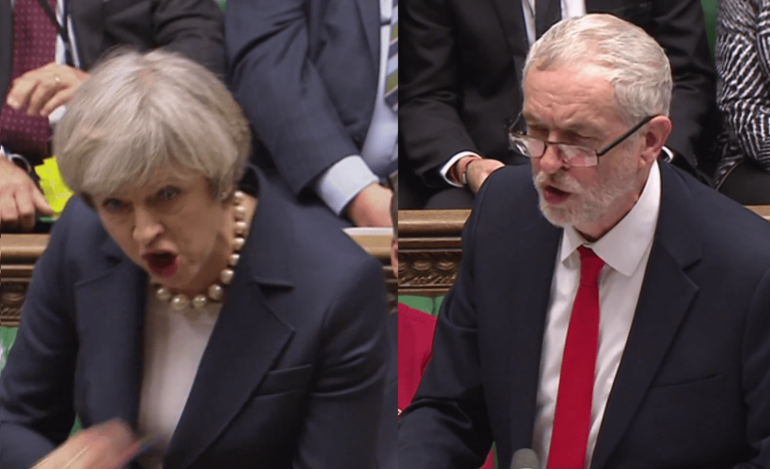 The Prime Minister said that protesting against Trump’s policies is an “insult” to our “most trusted ally” at Prime Minister’s Questions (PMQs) on 1 February.

President Trump has torn up international agreements on refugees; he’s threatened to dump international agreements on climate change; he’s praised the use of torture; he’s incited hatred against Muslims; he’s directly attacked women’s rights. Just what more does President Trump have to do before the Prime Minister will listen to the 1.8 million people who have already called for his state visit to be withdrawn?

May cited a “100% commitment to NATO”, protecting “British citizens from the impact of the executive order”, and “laying the foundations of a trade deal” in her response. She touted these as signs that discarding all manner of values to cosy up to Trump is worth it.

May is citing exemptions for British citizens (crumbs) as an advantage of being close to Trump. This is so desperate and sad #PMQs

Theresa May celebrates the massing of NATO troops on Russia's borders. Nothing threatening, provocative or warlike about that.#PMQs #bbcdp

May continues to trumpet the ‘special relationship’ between the UK and the US. But her comments at PMQs appear to bring that relationship into question:

But considering that Boris Johnson had to lobby the President to exempt British citizens from the ban, how special is the relationship really?

The Prime Minister spent the entire PMQs trying to justify her defence of the Trump regime. She had previously said:

On the day after the executive order was made to ban refugees and visitors from seven predominantly Muslim countries, why did she three times refuse to condemn the ban then?

May had no answer. The truth is the government only condemned the discriminate ban after immense pressure from the public and MPs.

PM attacks protestors who marched against Trump and his executive order on travel ban, she should be condemning his actions instead #PMQs

In the Commons on 1 February, May took fawning over Trump to the next level. In doing so, she is disgracing the country in front of the rest of the planet. Corbyn, MPs, and the rest of us must continue to tell her where to shove it.