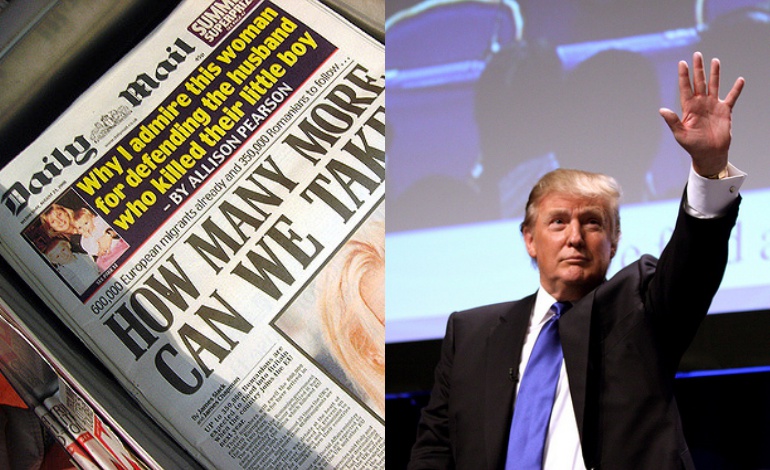 According to The Daily Mail, the left is “hysterical” over Trump. And his critics all need to “calm down”. Despite mass protests across the UK and US, and widespread condemnation of his policies, The Daily Mail believes everybody should just shut up. And all because Trump supports Brexit.

While The Mail does find some of Trump’s policies “misguided”, and a few “distasteful”, it appears the paper believes we shouldn’t do anything about them. And that trade deals are much more important than people’s rights.

These are nervous times. The last thing Britain wants to do is make an enemy of the world’s greatest power.

Yes, that’s right. Don’t worry if “the world’s greatest power” is slipping into fascism. It’s all about business. But maybe we shouldn’t expect anything less from a paper that supported Hitler.

In fact, even comparisons with Hitler are apparently insulting:

This is not only a grotesque insult to him and the people of democratic, freedom-loving, constitutional America, but to the six million murdered by the Nazis in the Holocaust.

Unsurprisingly, given the paper’s attitude towards immigration, the paper finds there is nothing “racist” about Trump’s ‘Muslim ban’:

it is blatantly false to suggest that this is a racist measure, directed against all followers of the Islamic faith. Indeed, the overwhelming majority of the world’s Muslims remain as free as ever to travel to the U.S.

This will be of little comfort to green card holders handcuffed and detained for entering the country. Or any of the other people detained for no reason. The paper claims that the measure “is designed only to lessen the terrorist risk”. Yet the majority of attacks post-9/11 have actually been carried out by people who wouldn’t be included in Trump’s current ban. People, for example, from countries like Saudi Arabia, the UK, Pakistan, France, Nigeria, and others.

It’s not all about the Muslim ban

However wrong the travel ban is, there are other issues. Trump’s policies are far wider-reaching than his views on immigration. The Daily Mail conveniently forgets that people might also have other concerns. Or that people can hold more than one concern at once.

Instead, The Mail attempts to justify Trump’s actions based on what past presidents have done; actions which many criticised at the time.

The paper also attempts to justify Trump’s proposed state visit. And it rightly points out that other less than savoury world leaders have wined and dined with the Queen. But there are two problems with the argument. One, quite simply, is that two wrongs don’t make a right.

But the other is the inference that there weren’t protests when other world leaders visited. The paper claims:

Isn’t it strange that the Left spits so much bile against the champions of freedom to which refugees long to flee, while raising barely a squeak of protest against the hellholes they want to flee from?

Again, there is a long tradition of people opposing inappropriate state visits. In 2003, during the occupation of Iraq, thousands of people protested a state visit by George W Bush.

And it’s not all about bloody Brexit

According to The Mail, criticism of Trump is the primary domain of Remain voters:

and it is no coincidence, surely, that the attacks on Mr Trump in this country come mainly from the Remain camp.

And it’s the Remain camp, of course, which seems impervious to the fact that it would be sheer madness to throw away those advantages, so recently gained, by gratuitously snubbing a President who has shown himself so anxious to promote Britain’s prosperity.

But this isn’t about Brexit. It isn’t about Leave and Remain. It’s about recognising the crucial juncture we’re at in history and acting to do something about it; something The Mail completely failed to do in the 1930s.

And the paper curiously omits that people voted Leave for a myriad of different reasons. Many, for example, believed the quickly disregarded pledges that the NHS would receive an extra £350 million a week. And these people certainly did not vote for Theresa May to sell off the NHS as part of a trade deal with Trump. Let alone whatever other environmental or workers’ protections she is willing to negotiate away.

The wrong side of history

According to The Mail, this is the “tyranny of the minority”. But with thousands of people taking to the streets with less than a day’s notice, and just under 1.8 million signing a petition calling for Trump’s state visit to be cancelled, this is not the resistance of a “liberal elite”. These are ordinary people who don’t want to see a slide into fascism.

And, yet again, The Daily Mail is on the wrong side of history.

– Join the protests if and when Trump visits.

– Read this for 5 things you can do if you’re angry about the Muslim ban.