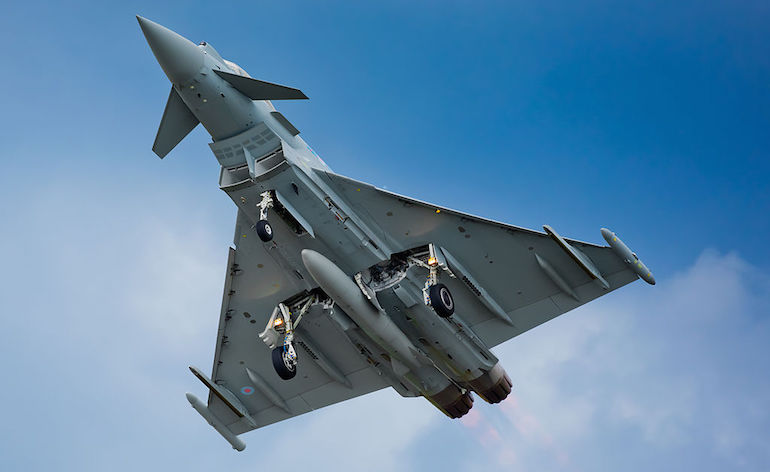 On Sunday 29 January, two people apparently attempted to disarm a fighter jet destined for Saudi Arabia. The plane forms part of £6.8bn of arms deals the UK government has licensed to Saudi Arabia since David Cameron became Prime Minister. And the action has highlighted and publicised these deals.

Police confirmed that they had arrested two people on suspicion of criminal damage.

Authorities arrested Reverend Daniel Woodhouse and Sam Walton after allegedly entering the BAE Systems base in Warton, Lancashire. On their release from custody, Woodhouse stated:

The UK government has blood on its hands and we need to do everything we can to stop the transfer of weapons and show these sales are illegitimate. By providing weapons and support Britain is deeply complicit in Saudi war-crimes, and it’s vital that we bring an end to this immoral, abhorrent trade.

Before the action, the pair released a statement saying:

We take this action in order to prevent the export of weaponry that will almost certainly be used in war-crimes.

Eurofighter Typhoons and Tornadoes sold to Saudi Arabia are being used on combat missions in Yemen. BAE also supplies Saudi Arabia with Hawk jets, used to train the Royal Saudi Air Force, which will almost certainly have been used in Yemen in their ground attack capacity.  Typhoons and Hawk jets are known to be on site being prepared for imminent delivery to Saudi Arabia, and we have seen Saudi Tornadoes there ourselves.

The action came on the 21st anniversary of another action at Warton. In 1996, a group of women broke into the base and disarmed a plane destined for Indonesia. The women used household hammers to damage the plane.

Writing about this latest action, one of the women, Andrea Needham, said:

[H]ow uncannily similar a situation to the one we faced in 1996: British government sells weapons to despotic regime, dismissing evidence they’re being used against civilians; campaigners do everything in their power to stop the sales, but the government and the weapons manufacturer insist the sales must continue; activists break into the factory and attempt to disarm the weapons themselves.

Given the evidence we have heard and the volume of UK-manufactured arms exported to Saudi Arabia, it seems inevitable that any violations of international humanitarian and human rights law by the coalition have involved arms supplied from the UK. This constitutes a breach of our own export licensing criteria.

Speaking to The Canary, Andrew Smith from CAAT stated:

Our legal action is the first time that arms exports have been put on trial in this way. We’re always hearing about how rigorous and robust the system supposedly is, but nothing could be further from the truth.

UK arms and political support have consequences – they strengthen and legitimise the appalling Saudi regime. UK fighter jets and bombs have been central to the destruction of Yemen and the suffering of Yemeni people.

In a time of political darkness, it is all too easy to feel powerless, and that we cannot affect world events. Hopefully, this will be a step in the right direction in ending the suffering in Yemen.