See you in court: the government is facing legal action from commuters over the chaotic Southern Rail crisis - Canary 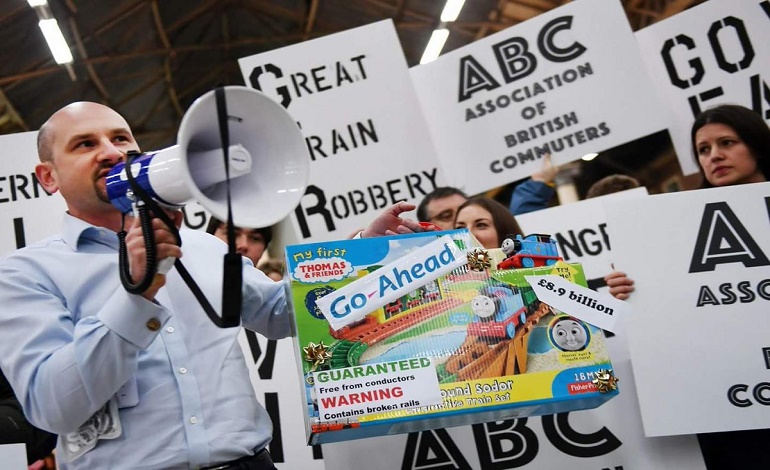 Fed up commuters are taking the Conservative government to court over the chaos on the Southern Rail network. On Wednesday 1 February, an application for a judge to review the Conservatives’ chaotic handling of the crisis was lodged. And it could see the government in the dock over the rail fiasco.

The government in the dock?

The Association of British Commuters (ABC) has applied for a judicial review into the government’s handling of the Southern Rail crisis. This is a legal process whereby the High Court reviews how the Department for Transport (DfT) has dealt with the rail company. If the government is found to have not fulfilled its duties, the court can declare DfT actions unlawful, forcing the government to intervene to resolve the crisis.

The ABC grew because of grassroots efforts among angry southern commuters. But because of the state of Southern Rail, the group decided to crowdfund to take legal action. The two areas where the ABC want a judicial review to look into are:

Blowing the whistle for passengers

The ‘delay’ element relates to the government’s failure to enforce GTR contractual obligations. Namely, the ABC believes that the company has failed to meet its performance targets, and that the government has done nothing to try and remedy this.

The ‘discrimination’ element relates to the government’s alleged breaches of disabled people’s rights. Namely the ABC believes that Southern Rail is in breach of the Equality Act 2010 regarding its scrapping of full disabled access at 33 stations. Further alleged breaches relate to overcrowding due to GTR mismanagement disproportionately affecting disabled passengers. And the government’s failure to force GTR to act to stop this.

The DfT said it would not comment on “ongoing legal proceedings”. A GTR spokesperson said: “The subject of a judicial review is a matter for the Department for Transport.”

As The Canary previously reported, the government announced in September 2016 an extra £20m for GTR. This was to try and sort out the rail operator’s mess. And it was coming from public money. But there was an almighty slap in the face for passengers and workers alike. Southern Rail had actually just increased its profits to nearly £100m. Also trade unions and Southern Rail are currently in a protracted industrial dispute about driver-only operation (DOO) trains.

Commuters. Out of patience

And all of this means continued chaos for commuters. As Lianna Etkind from the Campaign for Better Transport said, the legal case:

is a step forward for passenger power. It is absolutely right that the government is held to account for the failings of the Southern franchise… [It] has made peoples’ lives a misery. Long before any industrial dispute, Southern passengers had to rely on a train service plagued by delays and disruptions, under a management contract with no financial penalties for poor performance.

The court will serve the government the action. And it will have 21 days to respond before a judge decides whether the review has grounds to go ahead. If it does, then the ABC will be crowdfunding again to get the government in the dock. And judging by the appalling state of Southern Rail, there may be many passengers willing to donate to this case.