As Farage is accused of lying, UKIP's new leader is caught out telling a colossal whopper [VIDEO] - The Canary 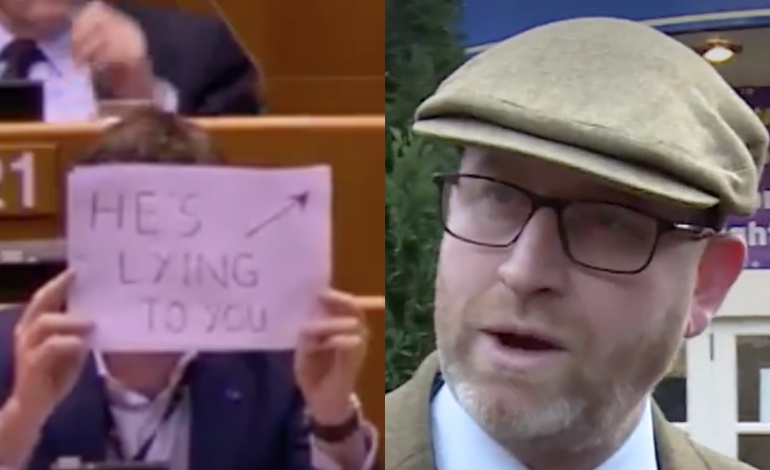 Things aren’t going well for UKIP this week. Both their leader and their former leader have been accused of lying. But while the claims against Nigel Farage are par for the course, the consequences for the new leader, Paul Nuttall, could be much more serious.

The accusations made against Farage came during one of his rare appearances at the European Parliament. Sitting behind Farage, London MEP Seb Dance held up a piece of paper with an arrow pointing to Farage, with the words ‘He’s Lying to You’ written on it. Farage was attempting to defend Donald Trump:

Speaking about his action, Dance stated:

I held the sign up because I  am getting frustrated at the lack of challenge to nationalism and populism, and the rules in European Parliament restrict the ability to challenge it.

We had limited time to debate today, so I protested in the only way I knew how at that point, which was to grab a piece of paper, write a very simple message on it and sit behind Nigel Farage during his usual diatribe.

But UKIP has filed an official complaint. UKIP MEP Bill Etheridge claimed that “officials failed to remove” Dance, and that the MEP had made a “defamatory personal remark”.

The curious case of Nuttall and the empty house

The claims about current UKIP leader Paul Nuttall are potentially much more serious. Nuttall is running for MP in the Stoke by-election. And Channel 4 News says “Nuttall may have broken electoral law by giving an incorrect address on his official nomination form”.

Journalist Michael Crick challenged Nuttall about the address he used, asking him:

It says on your nomination form that you’re living at 65 Oxford Street?

And asked to clarify, Nuttall continues:

No. Not at the present time. But I will be. I’ll be going in there and I’ll be there for the rest of the campaign.

But he is challenged further:

Hang on a moment. You’re meant to put on the nomination form your home. That’s not your home, is it? 65 Oxford Street? It’s empty… It’s meant to be your home.

But as is pointed out in the interview, the law is clear. Candidates must give their home address on the nomination form. Electoral Commission rules state:

The candidate’s full home address must, by law, be included on the nomination form. You should advise candidates that business addresses are not legally permitted. If any detail of the home address is wrong or omitted, the nomination is not automatically invalid if the description of the place is such as to be commonly understood.

The law says when you sign the nomination form, you’re meant to put down your home at the time of nomination. That wasn’t your home. Your home as far as I’m aware is Bootle.

An assertion Nuttall appears to agree with. But he still denies he’s put the wrong address on the nomination form:

No I haven’t. I’ll be in there and be there for the rest of the campaign.

Nuttall continues denying that he has made a false declaration. But when asked whether he’s even been to the address, he replies:

No I haven’t. People are moving in for me.

And to prove the point – the empty address, Crick has posted on Twitter:

Inside the empty Stoke house which Paul Nuttall claimed is his "home", and which will appear on ballot papers as such pic.twitter.com/RR7upTW2Ek

Meanwhile, Nuttall took to Twitter to make light of the accusations:

But he hasn’t moved there yet. And he has only claimed he’ll be there for the duration of the campaign.

And while Nuttall may think a jokey emoticon rectifies the situation, the consequences could be far more serious. In 2016, a Conservative councillor was jailed for two months for filling in a false address on an electoral registration form.

This is an attack on the fundamental principles of democracy and a gross breach of trust.

It is not the first time Nuttall has been accused of lying. But he seems to believe he can get away with this. It’s time to show him he is very much mistaken.