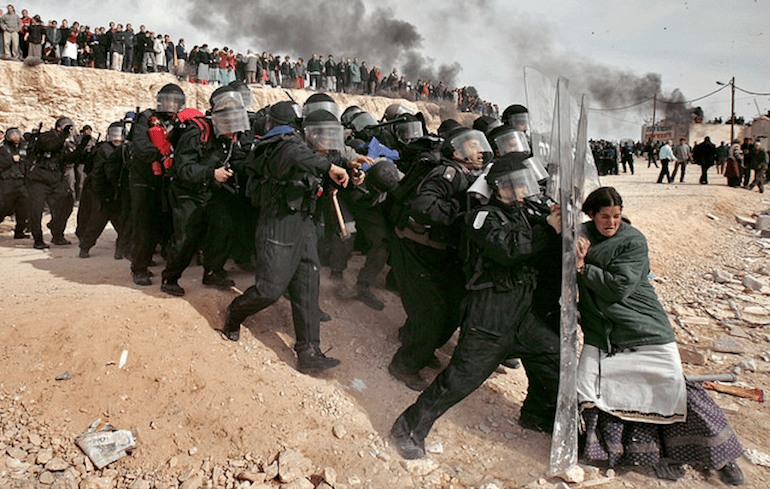 The forced evacuation of an illegal Israeli settlement has led to an unprecedented move by Israeli Prime Minister Benjamin Netanyahu. He has vowed to build a brand new settlement for the 40 evacuated residents. But the UN has condemned what it says are Netanyahu’s plans to build 5,000 new units. And a Cabinet minister has vowed that this will be the beginning of the annexation of the entire West Bank.

The evacuation of an Israeli outpost caused a great deal of consternation. Protesters clashed with police as Israeli Defense Forces ordered the evacuation of Amona, an illegal settlement in the West Bank. They turned up on Tuesday 31 January and demanded people leave within 48 hours.

The first new settlement in 25 years

But Netanyahu responded to the evacuation by promising Amona residents a new home. And it would be no more in line with the rule of law than their previous residence. The reason? Their new home would be a brand new settlement in the West Bank. The first new settlement built in 25 years, in fact.

Under intense international scrutiny because of its illegality, Israel has only carried out its settlement expansion around existing settlements rather than establishing new ones.

BREAKING: @IsraeliPM instructs his aides to prepare the founding of a new settlement in the West Bank, the 1st new WB settlement in decades

The annexation of the entire West Bank?

Netanyahu, along with a panel, will locate a site to establish the new settlement by the end of March 2017. Even though the high court already rejected a proposed plan to build on private Palestinian land on 1 February.

But Education Minister Naftali Bennett issued a statement promising to annex the entire West Bank. And he recently urged the passing of a bill to legalise the seizure of Palestinian land. This would mean Israeli outposts and other settlements could remain and be built with no legal repercussions.

The UN has condemned the new settlement plans. In a statement, a spokesman for the Secretary-General said:

We are concerned over recent announcements by the Israeli Government to advance over 5,000 settlement units in the occupied West Bank.

We once again warn against any unilateral actions that can be an obstacle to a negotiated two-state solution and call on both parties to return to meaningful negotiations on the basis of relevant Security Council resolutions and in accordance with international law, in order to address all final status issues. The United Nations stands ready to support this process.

Essentially, the Israeli government has appeased the 40 Amona residents by pledging to build 5,000 new settlement units. There’s something fundamentally wrong with the maths of that trade off. What’s more, Netanyahu has ignored both national and international law in the process. And this is in addition to a further which 6,000 units he has planned via existing settlements.

It’s no longer enough for a UN security resolution to simply call settlement activity illegal. Whether it has passed with the help of Israel’s biggest allies in the US and the UK or not. Because Netanyahu’s Likud Party is holding nothing back this time, come hell or high water, UN resolution or court order.

This has gone far beyond talks of a two-state solution. We are now talking about the very existence of Palestine.