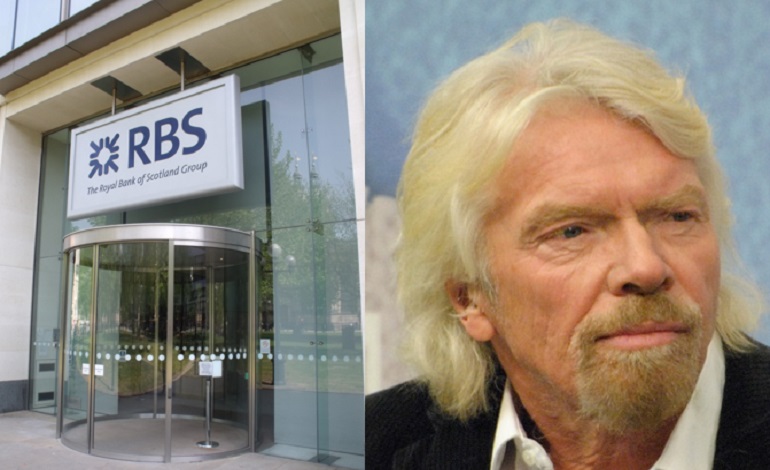 The Royal Bank of Scotland (RBS) is using Richard Branson’s Virgin Money brand as an alleged ‘cover’ to pursue legal cases attempting to bankrupt RBS/NatWest customers. But in a bizarre twist, these customers have never even held an account with the business tycoon’s brand.

One case, passed to The Canary, involves allegations against RBS of forgery, mortgage fraud, and falsification of customer documents. And the revelations blow open the debate about the potential scale of alleged customer abuses at the majority publicly-owned bank. They may also pave the way for further legal claims.

Launched in 1997, the Virgin One Account was a joint venture between Branson’s Virgin Direct and RBS. But when RBS took a majority shareholding in 2001, it changed to the NatWest One Account. Virgin Direct merged with Virgin Money in 2002, and then bought out the failed Northern Rock bank in 2011/12.

It is here where the story of former police detective Andrew Keats comes in.

Keats originally held a Northern Rock mortgage when the bank was an entity in its own right. But in November 2004, he transferred his business account and personal mortgage to a NatWest One/RBS account. The dispute between Keats and RBS is about a void mortgage, which he believes the bank originally granted him in error.

In September 2015, Keats received correspondence from RBS regarding his dispute with the bank. But it was sent on Virgin One letterhead, which was by then more than a decade out of date. Even though he had never held an account with Virgin or any of its subsidiaries.

The letter to M&M solicitors (acting for Keats) from RBS threatened him with repossession of his house if the mortgage balance wasn’t settled by 29 November 2015: 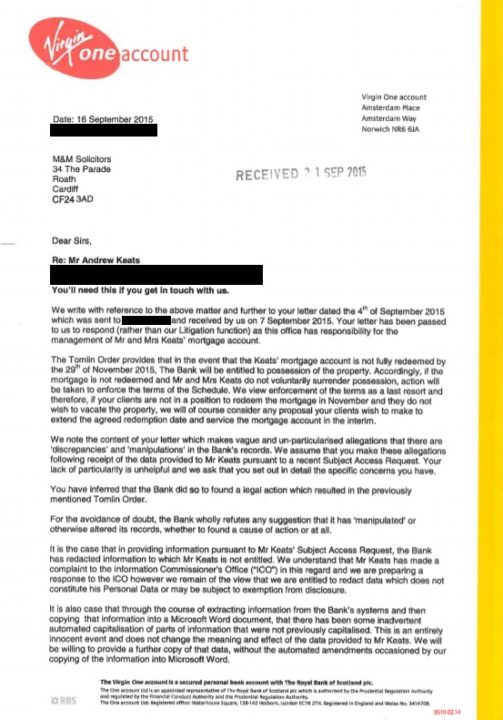 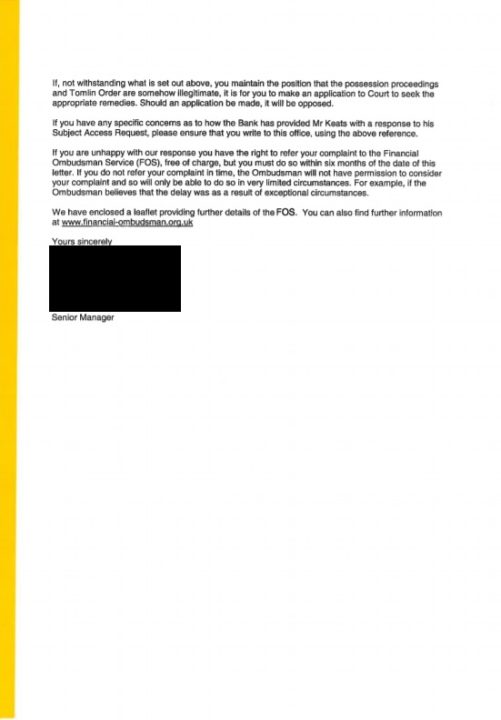 Virgin’s involvement confused Keats. So, he took the issue up with Virgin, which told him RBS had sent the letter in error. And that it had received several other, similar queries from the media. 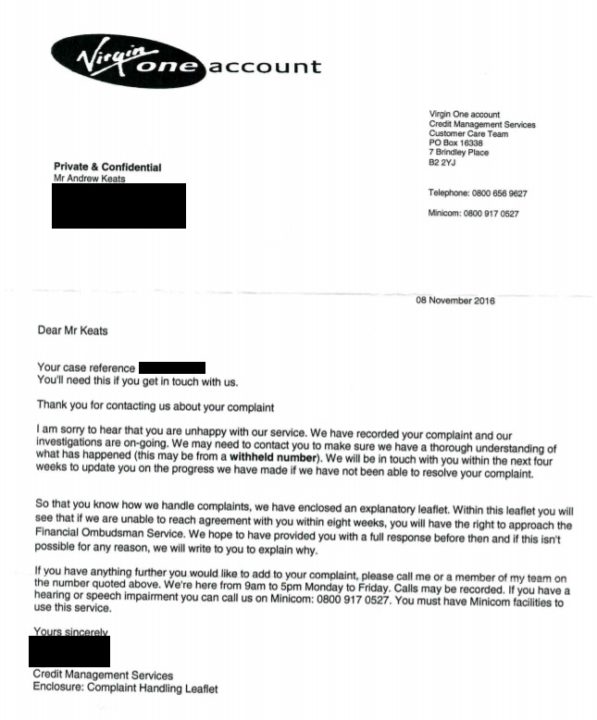 Ian Fraser, an investigative journalist, questioned RBS Chief Executive Ross McEwan over the allegations during an LBC interview in November 2015. The Canary has been passed the audio. McEwan initially laughed at Fraser’s allegations. But then the journalist explained in more detail:

You keep saying that they were allegations but that’s what they were, but no one has proved these things… you show me where it’s gone wrong and show me what difference it would of made to the actual case that was held and the outcome of that.

Keats hopes that his upcoming court case will prove that the allegations against RBS are true. But McEwan, during the LBC interview, appeared to miss the point. If RBS knowingly falsified customer documents and transcripts, and relied on those documents in court, that would be perjury; irrespective of any bearing it may or may not have had on the outcome of previous legal proceedings.

The public bought a 58% stake in RBS in 2008 to avoid its collapse. But because of the structure of the government’s share plan, the value of RBS the public owns has actually increased since 2010. “We” now own 72.9% of the bank.

Since the 2008 financial crash RBS has been the subject of numerous scandals. Most recently, the bank set aside £6.4bn in readiness for a fine from the US State Department. The fine relates to the sale of so-called ‘sub-prime’ mortgages before 2008. Analysts expect that the fine from the US government will push RBS into a loss for this financial year.

This was brought to our attention back in October 2015 by more than one media outlet. We contacted RBS at the time and they confirmed to us that they had sent the letter in error.

So, why did RBS send Keats another Virgin-fronted letter in November 2016? Even if it was on different headed paper and had a different head office address?

An RBS spokesperson told The Canary:

We take great care to ensure that our customers receive appropriately branded correspondence, and regret that a manual error was made in this instance. We are looking at the training we have in place to ensure this doesn’t happen again. We apologise for any concern this may have caused.

The tip of the iceberg?

I’ve got hundreds of documents from NatWest One. And it’s not until 2015 when RBS was attempting to explain why it falsified documents in my customer records that it used Virgin One headed paper, to imply there’s a bug in Microsoft Word [to explain it]. And I can’t see any other reason why they would use Virgin One headed paper…. I think it’s just a diversion, really. They pretend it’s a mistake. It’s just unexplainable…. It doesn’t make sense to me how [Virgin] could allow their logo to be used in that way.

Keats also says that the fraud uncovered at HBOS, which saw six people jailed on Thursday 2 February for a total of more than 45 years, is “just the tip of the iceberg”. And that RBS is implicated in the same way. Keats believes that the method of fraud, including falsification of documents and forgeries, allegedly committed by RBS appears to be the same modus operandi of systemic US mortgage fraud leading up to the 2008 financial crash.

The public’s ‘bailing out’ of numerous banks after the 2008 financial crash has caused nothing but misery for us. The Tories have used it as an excuse for their devastating austerity agenda. It has meant public debt has increased by over 50%. And it has also meant that “we” have probably lost money, as the latest sale of our shares in Lloyds proves as a case in point. But the fact that RBS is allegedly manipulating and mistreating its customers – the very same people who saved it from collapse – stinks. The government must set the public free of this institution. Because there’s nothing “Royal” about RBS.

This article is a joint investigation by Steve Topple and Joel Benjamin.

This article was updated at 11pm on Thursday 2 February to reflect an error. It previously stated that the first letter Andrew Keats received was from M&M Solicitors; it was in fact from RBS to M&M Solicitors, who were acting for Keats.

This article was updated at 2pm on Friday 3 February to include a comment from RBS.

– Read more from The Canary on Richard Branson.