Just when you thought Theresa May couldn’t get more despicable, she drops a bombshell claim about Hillsborough - The Canary 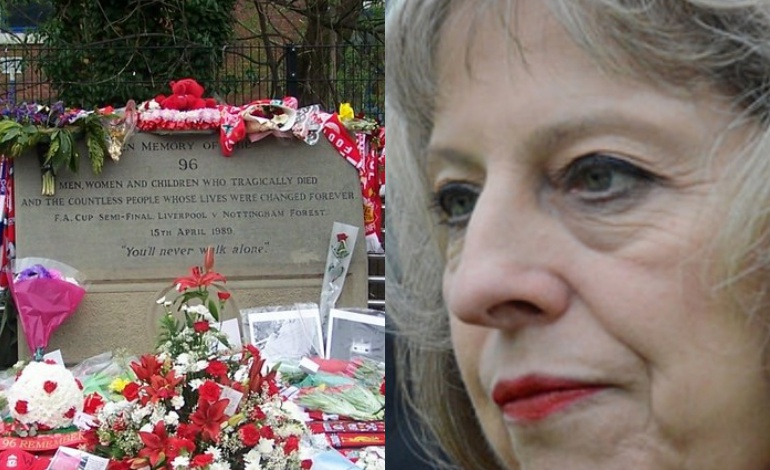 Theresa May has caused outrage by claiming credit for securing justice for the Hillsborough victims. Asked at Prime Minister’s Questions about standing up for British values, May retorted:

I’ll tell you what standing up for British values is. I and this government introduced the first Modern Slavery Act in this country. I have ensured that stop and search is reduced because I don’t believe that anyone on the streets of this country should be stopped and searched because of the colour of their skin. And I ensured justice for the families of Hillsborough.

The Hillsborough families fought for justice for 27 years. And they are still fighting. 96 people died during the fatal crush at the FA Cup semi-final between Liverpool and Nottingham Forest. The police, government and the media (particularly The Sun) blamed the fans.

After 27 years, the inquest into the deaths finally found the fans were unlawfully killed. And that the fans were not responsible for what happened.

So the question has to be asked. What was Theresa May doing for the last 27 years to ensure justice for the family and friends? And in particular, what has she done during her tenure of Prime Minister and six years in the Home Office?

Well, it appears she gave an emotive speech. And apparently, it made some MPs cry. But it only came after the unlawful killing verdicts. She described what happened:

The terrible events of Saturday 15 April 1989 shocked this country and devastated a community.

And she said that the families “never faltered”, and that they:

fought for justice from the authorities that should have been trusted, and have laid blame and tried to protect themselves.

Unsurprisingly, many were unimpressed by her claims:

It was campaigning of Hillsborough families & fans that secured justice against institutional denial & defensiveness https://t.co/uD5J4L3dGO

And others argued it was an insult to the families:

Theresa May's deluded rant she secured Justice for Hillsborough families is an insult to the families who had to fight so hard and so long!!

Anyone not familiar with reality could be forgiven for believing May is a champion of human rights from her little tirade. But this couldn’t be further from the truth. May wants to scrap the Human Rights Act. And she introduced the ‘Snooper’s Charter’, which was pushed through despite widespread opposition and criticism.

In fact, according to Amnesty International UK, life under Theresa May is getting close to Orwellian standards:

The Big Brother surveillance state that George Orwell warned of back in 1949 is alive and dangerously well in Europe today. Governments, including the UK, are not far off creating societies in which freedom is the exception and fear the rule, which should be of deep concern to us all.

And finally, Theresa May thinks she’s ended ethnic discrimination in the police. But although overall figures for stop and search are decreasing, figures released in October 2016 paint a different picture. Out of 386,474 stop and searches in 2015, 58,397 were people who self-identified as being black or black British. This means black people are 6.5 times more likely to be stopped and searched than white people. In direct contraction to May’s claims, this is a huge increase from the 2014-15 figure, when black people were 4.4 times more likely than white people.

If when Theresa May speaks about “British values”, she means justice and equality for all, then this is great. Unfortunately, the facts speak for themselves. And her claims are an insult to all who fight for real justice.