Thousands of Britons tell Trump where to shove his Muslim ban, and MPs have the best response - The Canary 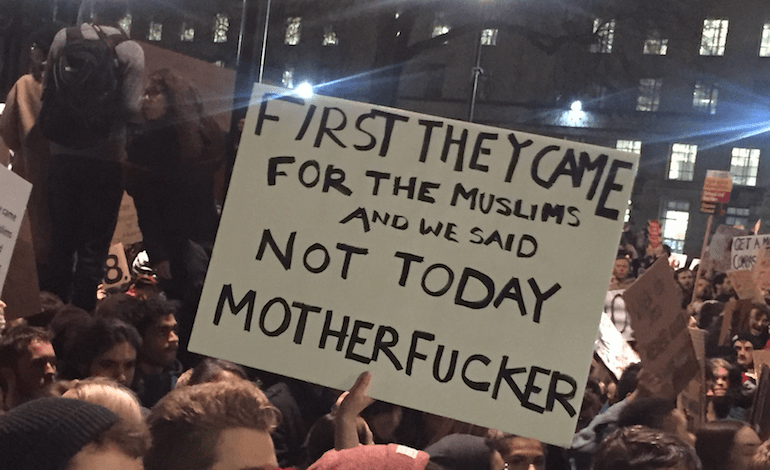 Thousands of people demonstrated in cities around Britain protesting US President Donald Trump’s travel ban, saying that Britain should not welcome the President in a state visit. At the same time, in the House of Commons, MPs debated an emergency motion condemning the US ban.

Shame on May. Shame on Trump.

Police in London cordoned off Whitehall on 30 January while a wave of placards moshed outside Downing Street:

Many people had made a special visit to London to stand against Trump’s actions. Protesters were chanting: “Say it loud, say it clear, refugees are welcome here!” and “Shame on May!”

One protester, Sarah, told The Canary that she was there because Trump and May had “deeply offended” her:

I’m deeply offended by the behaviour of Theresa May. I think the state visit wasn’t in her gift and she shouldn’t have invited him. And I’m deeply offended that Trump is trying to suggest that there’s something normal in this racist ban. And that he said he was going to do it and he’s doing it, and we’re being asked to somehow celebrate the fact that our Foreign Secretary thinks it’s somehow sufficient to exempt British citizens. That’s not the issue. That’s not the point. I’m terrified that every time we’ll absorb another outrageous thing that Trump does. We have to resist everything and resist every outrage.

Another protester, Zara, shared Sarah’s views, although she didn’t think the UK should ban Trump completely. But she said that May should “call a spade a spade” and tell Trump that his policies were unacceptable.

No reason or rationality

And UK MPs seemed to share exactly those same sentiments. While speakers with megaphones fired up the crowds, Ed Miliband MP was in parliament making his own speech. Co-sponsoring a debate with Nadhim Zahawi MP on an emergency motion calling for a repeal of Trump’s ban, the motion passed unanimously.

In his speech, Miliband said that measures were understandable in America’s current security climate. But it was not acceptable to impose “an indiscriminate and indefinite ban” on refugees from the seven countries in question:

Understandable fear is no excuse for the suspension of reason and rationality.

And it does seem that there is a question on rationality. While the executive order cites the 9/11 attacks, none of the attackers came from any of the seven countries named in the ban. It also saw a US Iraqi interpreter and a five-year-old detained while coming into the US. And there were fears that it could even affect dual nationals such as Olympian Mo Farah and Zahawi himself. While Foreign Secretary Boris Johnson confirmed the latter would not be the case, the US Embassy has been ambiguous.

But, above all, the British people out on the streets have a real problem with the way the US, the UK’s biggest ally, is touting the rhetoric of hate and fear of the other. And the UK is by their side, failing to question that same rhetoric. We should not stand by. We should stand up, and tell Trump ‘no’. Not us. Not today. Not ever.