Farage loses his sh*t about 'loony lefties' protesting Trump, and his listeners' responses are delicious - Canary 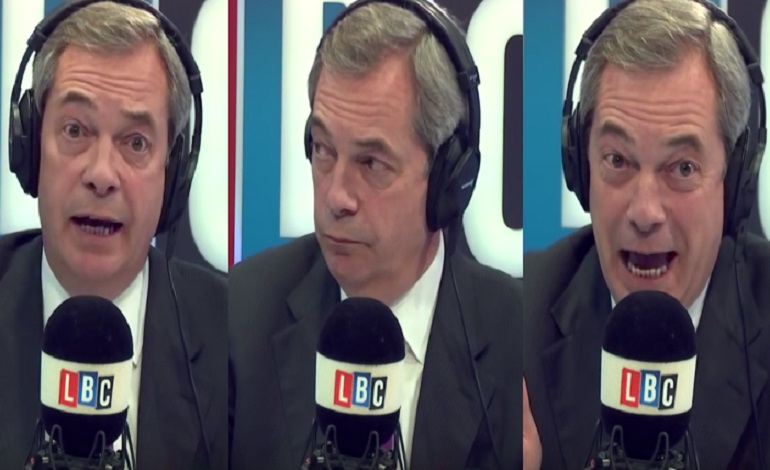 As the world came out to “Stand Up To Trump” on Monday 30 January, Nigel Farage was busy condemning the protests. On his LBC show, the former UKIP leader called out the “anti-democratic” “hypocrites” protesting about Donald Trump’s so-called ‘Muslim Ban‘. But some of his listeners were having absolutely none of it.

Farage began by discussing the so-called ‘Muslim Ban‘. The executive order by Trump will see travellers who are nationals or dual nationals of Iran, Iraq, Libya, Somalia, Sudan, Syria and Yemen stopped from entering the US for 90 days. Farage said:

As this was in his manifesto… frankly if you are opposing what Donald Trump has done you are against democracy and you’re against the democratic process.

But Adi from Finchley said:

Farage tried to cover his somewhat hypocritical tracks by saying it was because people were calling Trump’s Muslim Ban “illegal”. Even though the UN has labelled the ‘Muslim Ban’ as such. And that it was wrong to label it a “Muslim” ban, as the word didn’t appear in the executive order. Even though all the countries listed are Muslim. But Adi was having none of it:

Everyone’s entitled to their opinion… for you to say it’s anti-democratic… I just want to point out that’s wrong because you’ve always been opposed to what governments have campaigned on.

Farage conceded he was “dead right” on that.

Mike from Stevenage was next on the line. He said of Farage’s anti-democratic claims:

I think [in a] democratic, pluralistic society you are allowed to express your opinion and protest freely, whether or not your opinion agrees with the executive. That is one of the joys of living in this country. I mean, the fact that I dislike everything about UKIP, and I can have this conversation, is a wonderful thing…

Andrew from Norwich said he usually agreed with Farage and that he supported Brexit. But even he asked why countries like Tunisia and Saudi Arabia weren’t listed on Trump’s executive order. Because they were known to produce more terrorists than countries like Iran and Iraq. But Farage somehow managed to twist this criticism of Trump’s policy onto protesters:

I think there’s a degree of rank hypocrisy with all this… People are all saying Trump is the worst man in the world and I think this is absolutely laced with hypocrisy. Text: ‘Loony Lefties protesting over a storm in a teacup obviously got nothing better to do than protest about Trump.’ Tracy, from Leyland

After which Andrew was cut off.

The programme continued in much the same vein, with some callers agreeing with Farage. But Thomas from St Helens raised concerns that it would be “bigotry” to ban Trump from the UK, and questioned what it would achieve. Even though he didn’t support the ‘Muslim Ban’.

Towards the end, Sijad from Bradford called in to say that we should respect Trump’s decisions. But he perhaps summed up how much of the country felt about Farage and Trump:

Currently, in the UK… under the rise of this right wing hysteria, fanned by people like yourself, my father, a Muslim and a proud Brit, is terrified, literally terrified. Hearing news of mosques getting burnt down, hearing news of people getting shot in Canada in mosques… a prominent imam getting punched in the face in Hull, a peace-loving guy getting blinded. And the fact that somebody like Kim Kardashian, who’s a socialite, she’s not a politician like yourself, even she recognises that lawnmowers kill more people in the States than radical Islam. And you of all people Nigel, married to an immigrant. Your wife is an immigrant. The only difference is she’s not a Muslim, she’s not black…

Before Sijad was cut off, Farage said it’s in all of our interests to stop “bad people” coming into our country. Without a hint of irony. Forgetting that’s exactly what Trump protesters are trying to do. By democratically using their right to protest. Against someone who they feel is a ‘bad person’. Unfortunately for Farage, that ‘bad person’ happens to be Trump.

– Read more from The Canary on Donald Trump.