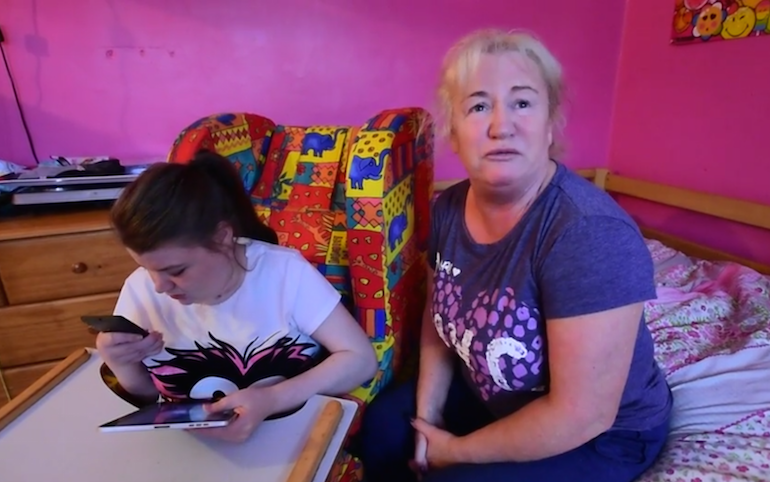 A 26-year-old woman with a severe disability recently had her benefit payments stopped. Her name is Georgina Ball. And she is unable to walk, talk, read or write.

The Department for Work and Pensions (DWP) claims her payments stopped because she missed an appointment. An appointment which would have assessed Georgina’s ability to work. The woman’s full-time carer, her mother Paula Ball, denies that any such appointment existed. And she explains their situation in this video:

Georgina suffers from Aicardi Syndrome, which causes symptoms including severe epileptic seizures and learning disabilities. Because of this, she receives Employment Support Allowance (ESA). This benefit is assessed differently dependent on a person’s condition. The government’s own website states that:

You’ll then be placed in one of 2 groups if you’re entitled to ESA:

The [DWP] want her to go to work assessment to prove that she’s fit for work, but as you can see, she’s not fit for work. Their argument is they said they sent an appointment, which I didn’t receive. So when I phoned them I explained to them. They said well explain why she didn’t turn up. So I explained to them, well how can you [ask me to] explain something when I didn’t have the appointment in the first place.

So they stopped the benefits. Because they didn’t receive my letter back to them… I wrote an A4 letter back to them explaining Georgina’s needs and disabilities and what she needs. Recorded delivery. They then sent out a P45 saying she was fit for work. I got back on the phone and explained to them I’d sent them a recorded delivery letter. They actually found it and then said they would set her payment back up and now they’ve sent another appointment for a works assessment in February.

Georgina has had her payments reinstated. But the Balls face another mandatory appointment at the Mann Island Health Assessment Advisory Service on 15 February. This is despite a doctor sending the DWP a letter confirming Georgina’s condition. If she misses this appointment, her payments will once more stop. Paula told them that their disabled toilets would not be sufficient for Georgina, who is doubly incontinent. Despite this, the DWP has not offered them a home visit.

The Canary has previously reported on other people with disabilities who have been let down by the DWP. Obviously, there must be assessments for fairness and accuracy, but as Paula Ball points out:

Georgina’s condition is only going to get worse.

There is no chance of her getting better, she has a poor prognosis of life.

But many disabled people, like Georgina, don’t have people to fight their case for them and are dragged to these appointments and then when they don’t go, they have their money stopped.

I understand that there are people wrongly playing the system and they have to check but they are doing it to the wrong people.

They have all Georgina’s medical evidence in front of them. She will never be able to work.

The DWP told The Liverpool Echo:

We review people’s circumstances to ensure they have access to the correct level of support to match their needs.

But we recognise that for some people their conditions are unlikely to change, which is why we recently announced that we will be stopping re-assessments for people with the most severe health conditions and disabilities.

The department also claimed that it made the original appointment because Mrs Ball had not filled out the correct form. Her failure to do so meant that the DWP scheduled Georgina for a three-yearly review.

There seems to be little benefit in the benefit system’s current rigorousness. And yet there are incredibly apparent downsides to it. No reasonable person would think that a person in Georgina’s situation should have to prove what doctors have already confirmed, just for the sake of ticking boxes. But these situations still keep arising.