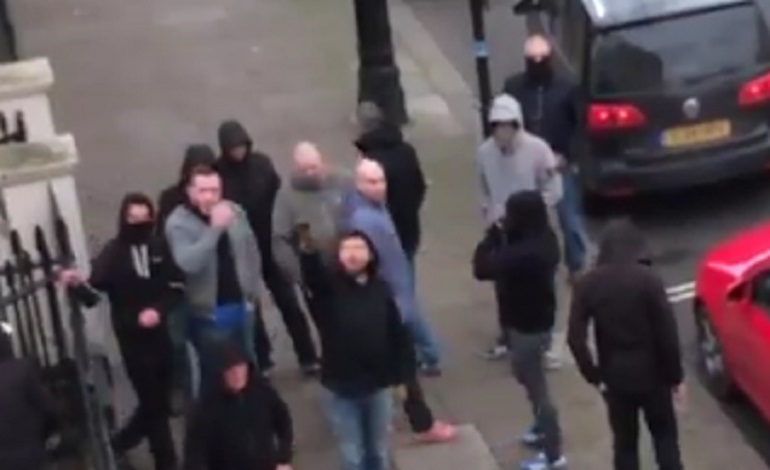 THIS ARTICLE CONTAINS CONTENT THE READER MAY FIND OFFENSIVE

On Saturday 28 January, alleged Nazi fascists carried out an unprovoked attack on a group of people in central London. The incident occurred in broad daylight right near a packed Victoria station. And it highlights how dangerous the rhetoric and politics of people like Donald Trump really are.

The occupation by the Autonomous Nation of Anarchist Libertarians of 102 Eaton Square in Belgravia has been going on since 23 January. The group has taken control of the building, which has sat empty since 2014, to use as a homeless shelter.

The Canary visited the occupation on 28 January. Around 30-40 people were in the building, including members of Autonomous Nation and Class War, along with families, journalists and photographers. Lauri Love, currently facing extradition by the UK government to the US over alleged hacking charges, was also present. The atmosphere was warm, welcoming and good-natured. Rapper and poet Potent Whisper was holding an afternoon of workshops on music and poetry.

But it was during this workshop that the attack took place. People inside the building had noticed a group of people wearing scarves over their faces gathering outside. The crowd began to throw projectiles at the windows and shout abuse:

They then surrounded three sides of the building, using lengths of wood and bricks to smash more windows. And they tried to gain access via the basement door. The attack continued for about ten minutes, until members of Autonomous Nation aimed and let off fire extinguishers at them. The group then ran:

Around seven children were in the building at the time, and many were screaming and crying. One photographer escaped through a side window, and parents hid their children in one of the house’s upper-most rooms. The attack left people shaken but uninjured. The police attended about five minutes after the fascists left. Autonomous Nation liaised with them, and they said they were happy with the situation. The police did not make any arrests. Nor did they attempt to gain access to the building.

Autonomous Nation is peacefully highlighting the mass of vacant properties owned by millionaires that lie empty in London. More than 20,000 homes, worth more than £12bn, currently lie empty in the capital. In contrast, the charity Shelter estimates that 170,000 people are homeless in London. And the number of rough sleepers in the capital has doubled since 2010 to over 8,000 a year.

So far, the group has given around 25 homeless people shelter. A member of the group told The Canary:

There have been loads of people coming from all over the country to visit, run creative workshops, perform and share stories. There is a community being built within this one building, which illustrates how large it actually is. The people without homes are happy to receive not just temporary shelter and food, but a space where people can commune. There has been much Facebook support, but we need more in terms of food, bedding and heating for the homeless.

The group has made good use of the expansive building. It has designated separate rooms for homeless people to sleep in and for meeting spaces and communal areas. At the time, Autonomous Nation appeared to be maintaining the £15m house in good order, not damaging what The Guardian referred to as the “polished parquet floors, tasteful uplighting and a grand, spiral staircase”.

Much of the media reported that Russian ‘oligarch’ Andrey Goncharenko owns 102 Eaton Square. But as detailed in court papers seen by The Canary, this isn’t strictly true. Goncharenko owns the lease on the property. But the late Duke of Westminster Gerald Cavendish Grosvenor, who died on 10 August 2016 (leaving a fortune of £9bn), owned the freehold. And as The Canary previously reported, his son and heir Hugh avoided paying £3.6bn in inheritance tax on his father’s estate.

Potent Whisper’s workshop focused on how people can use art to deliver political and social change. Speaking to The Canary, the rapper (whose latest work deals with gentrification) said:

It is not just homes that are being denied to us, but our community spaces too. Our libraries, centres, youth clubs and playgrounds are being stolen and sold. I think some of art’s power comes in its ability to create space. Art creates space for people to come together, to know each other, to share our humanity, to be heard, to teach each other, to love each other. Among the heavy cloud of propaganda that is the mainstream media, deep within the individualistic ideology of a consumerist society, in a land where big corporations can purchase, deface and devalue entire schools of thought, art creates an independent space for a true voice and narrative to be heard. The voice of humanity.

Speaking to The Canary after the attack, Autonomous Nation said:

On Saturday, a group of fascist scum tried to break into the building, smashing the windows where children as young as two were playing. We didn’t know scaring babies was what they were about, but some CO2 blasters and a single cop car scared them off.

But the incident highlights the serious nature of the current political climate. Much of the media has focused on Theresa May’s meeting with Donald Trump. But as The Canary analysed, the new president has already passed masses of legislation:

In short, quite a first week. Attacks on women, scientists, the environment, Mexico, Muslim immigrants, and so much more. As The Washington Post says: “The Trump administration is showing every sign of taking the nation far to the right in an effort to make good on a number of his pledges.”

The normalisation of the far right

In recent years, there has been an increasing ‘normalisation’ of the views of the far right. From Nigel Farage’s UKIP in the UK to Marine Le Pen’s Front National in France, via Trump’s in the US. This ‘mainstreaming’ has emboldened groups like Britain First and the English Defence League (EDL). But it has also led mainstream political parties like the Conservatives to take a harder, right-wing stance.

This seeping of far-right rhetoric into Westminster and the media has been visibly trickling down to the rest of society. Prosecutions for hate crimes against disabled people rose by 41.3% in 2015/16. Homophobic attacks rose 147% in the three months after the EU referendum. And in the month immediately after the Brexit vote, ethnically or religiously aggravated crime rose by 41%. And if alleged fascists feel they can attack a legal, peaceful occupation by a group trying to highlight the scourge of homelessness, then the pigeons of pandering to the far right have truly come home to roost.

– Support the Autonomous Nation of Anarchist Libertarians. The group is in Central London County Court on Tuesday 31 January. Goncharenko’s lawyers have filed a ‘trespass’ case.

– If you can help with supplies for 102 Eaton Square message Occupy Belgravia on Twitter.