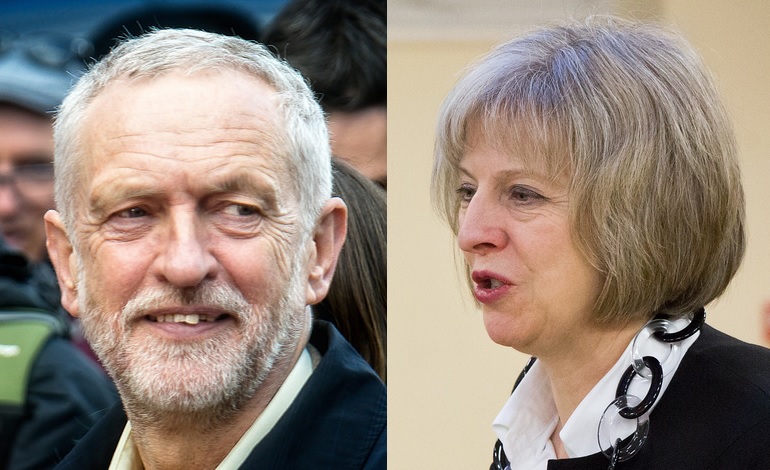 On 26 January, Theresa May addressed members of the US Republican Party. In her speech, she vowed that Britain’s days of “intervening in sovereign countries” was over. So, according to the Prime Minister, never again will the UK invade and bomb sovereign countries, like it did in Iraq and Libya.

But Labour leader Jeremy Corbyn took to Twitter shortly after her promise. And he ripped May’s peaceful pledge to shreds, in just 15 words.

Linking to The Daily Telegraph‘s explosive headline “May: No more wars like Iraq”, Corbyn wrote:

I don't remember her joining me in the voting lobby. Maybe she has alternative facts? pic.twitter.com/jwfpViqEKb

And Corbyn is right. Because in the voting lobby, he chose to push against the invasion of Iraq. Whereas May voted for it. Consistently, in fact. She voted against needing a UN Security Council resolution, or parliament’s support, for military action. She then voted against those demanding more proof in the case for war. And finally, she voted for the government to “use all means necessary” to remove Saddam Hussein’s non-existent Weapons of Mass Destruction (WMDs), which authorised the invasion.

But that was over a decade ago. Has much changed since? Well, no. In 2010, she voted for a continued military presence in Afghanistan. She also voted against requiring another UN Security Council vote for military action in Syria. And most recently, in December 2015, she voted for airstrikes in Syria.

So if May herself hasn’t changed, what has?

In his presidential campaign, Donald Trump regularly rallied against the USA’s foreign policy “disasters”. In a foreign policy speech in April 2016, Trump said:

One day, we’re bombing Libya and getting rid of a dictator to foster democracy for civilians. The next day, we’re watching the same civilians suffer while that country falls and absolutely falls apart. Lives lost, massive moneys lost. The world is a different place.

Our goal is peace and prosperity, not war and destruction. The best way to achieve those goals is through a disciplined, deliberate and consistent foreign policy.

But Trump always reserves harsh words for Iran. And May too is now warning about Iran’s “malign influence”. Which is surprising, since the UK reopened diplomatic ties with the country 18 months ago.

There has also recently been a US-UK convergence of views on Syria. Since the start of Syria’s civil war in 2011, the UK has consistently demanded that current President Bashar al-Assad step down. But Foreign Secretary Boris Johnson spoke on the same day as May’s US appearance. And he said the UK is now “open-minded” about Assad running for re-election. He commented:

I have to be realistic about how the landscape has changed, and it may be that we will have to think afresh about how we handle this. The old policy, I am afraid to say, does not command much confidence.

Trump’s openness to a less hostile relationship with Russia is the new “landscape” Johnson mentions. And Russia is an ally of Assad. Johnson also mentioned that the Trump administration needs to recognise that Iran is another ally of Assad. And that, “clearly, what we do not want to see is a further extension of Iranian policy and influence in the region”.

Ceasing the seemingly endless UK military interventions is a very welcome idea. But it is probably not one that the Tories came up with out of care for those staring down the barrel of our guns. As their past votes, policies and actions prove, they are not against intervention. They are, however, against doing anything that would weaken the UK’s ‘special relationship’ with the US.

Whichever way the wind blows on the other side of the Atlantic, it seems May’s government is intent to follow. That’s no break from the UK’s past. But as history has taught us, it may not bode well for our future.

– Take action against militarisation with the Stop the War coalition.

– Read more Canary articles about Theresa May, and Donald Trump.