Remember that £350m for the NHS? Well, it looks like US health giants will be having most of that - Canary 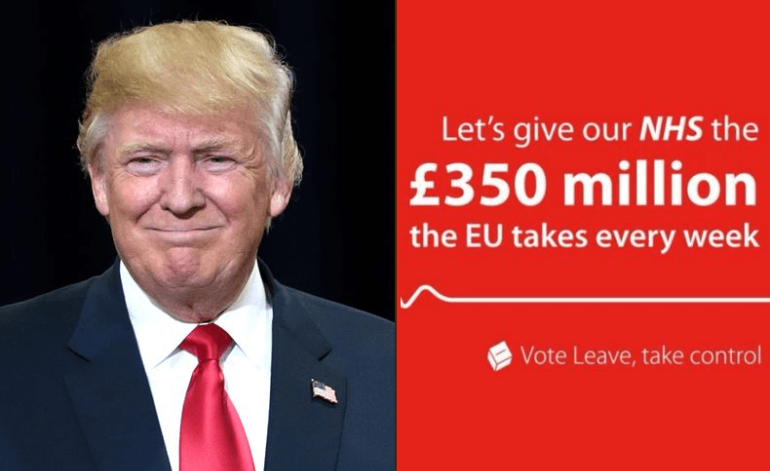 Remember that pledge by Conservative Brexiteers that we would get an extra £350m a week for the NHS post-Brexit? Well, now it looks like private US healthcare corporations may be the ones benefiting. At the expense of the NHS and the UK public.

Theresa May is in the US to discuss a post-Brexit trade deal. A deal that has Republican senators enthusiastic about US companies making profit from our NHS.

When questioned in person, May has repeatedly refused to rule out US privatisation of our healthcare as part of a trade deal with Donald Trump. Many are worried. Especially considering that both the US and UK administrations are ideologically committed to privatisation of healthcare.

BuzzFeed‘s Jim Waterson asked numerous US Republican senators whether the trade deal would be a good opportunity for US healthcare firms to get involved in the NHS.

Other Republicans were also excited about the possibilities the trade deal could bring.

The comments from American politicians follow a number of occasions where the Prime Minister has refused to rule out US privatisation of the NHS in a trade deal.

The NHS funding promise from Brexiteers was a bald-faced lie to begin with. The UK receives a rebate from the EU meaning the figure is actually under £250m a week. And that’s before you consider EU payments to farmers, poorer areas, and businesses.

But now it looks like US healthcare companies will be the ones gaining from Brexit, while we pay more. Increased privatisation means that shareholders must make profits. Money we spend on the NHS post-Brexit would end up going into the pockets of US shareholders rather than to improving services.

We would still need healthcare services, so would end up renting them back from these corporations at a higher price. At the end of the day, US giants would gobble up some of the money we may save from no longer paying EU membership fees.

Under pressure, a spokesman for Number 10 has since said:

The NHS will never be part of a trade deal and will always remain free at the point of delivery.

But the government made similar assurances over the Transatlantic Trade and Investment Partnership (TTIP). Former Prime Minister David Cameron said concerns about the NHS were “the reddest of red hearings”.

The only slippery fish here is the Prime Minister, whose rhetoric flies in the face of two sets of legal opinion stating the NHS is in danger. As well as this, the EU’s published TTIP offer clearly shows the NHS is up for grabs.

Campaigners also said leaked documents showed that the NHS was under threat from the US-EU trade deal (that went well beyond trade). The UK did not have the public service protections that other EU countries had in the deal.

And the Conservatives’ recent record with our NHS is not very reassuring. As well as record-breaking deficits and levels of private control, the Conservative government tried to sneak out the biggest public healthcare sell-off in the history. £7.9bn of contracts are up for sale in this NHS bonanza; 7.3% of the entire health budget.

Even this week, the privatisation continued. While the world watched Trump’s inauguration, the government quietly advertised the sale of a £515m NHS contract.

Back in 2009, many Republican politicians made extraordinary comments and peddled myths about the apparently “evil and Orwellian” NHS. (Perhaps the most Orwellian use of the word Orwellian to date.) The claims came over fears that Barack Obama would embark on the socialisation of US healthcare.

Chuck Grassley, now Republican chairman of the Judiciary Committee, said his Democratic colleague would have died untreated in the UK because he would be considered too old to deserve treatment:

I’ve heard several senators say that Ted Kennedy with a brain tumour, being 77 years old as opposed to being 37 years old, if he were in England, would not be treated for his disease, because end of life – when you get to be 77, your life is considered less valuable under those systems.

The reality is the opposite. An account in The Evening Standard shows a 31-year-old dying from a brain tumour in the US because his money ran out. This is the type of healthcare system the Conservatives are edging towards.

In short, post-Brexit US privatisation would siphon money we save from EU membership to US corporations. The US spent 17.1% of GDP on healthcare in 2013 without covering millions of Americans. But a few Americans made millions. Here in the UK, we spent 8.8% of GDP, and covered everyone.

£350m a week for the NHS is starting to look a lot more like healthcare asset stripping for the US.