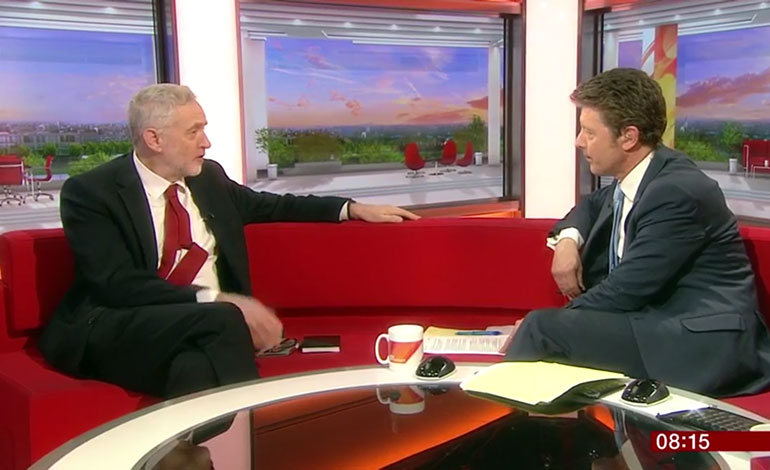 On the morning of 9 February, Jeremy Corbyn appeared on BBC Breakfast. While there to establish Labour’s stance on Article 50 and plans to oppose the Conservatives, he was also questioned about the recent rumours that he was planning to quit. With presenter Charlie Stayt implying instability within the Labour Party, Corbyn had enough and slammed the BBC for reporting “fake news”.

Corbyn on the BBC

Corbyn was joined by presenters Charlie Stayt and Steph McGovern. On the show, Stayt questioned Corbyn about supporting Article 50 and the fact that more than 50 Labour MPs voted against it. Corbyn responded by claiming he wished to respect the result of the people but it didn’t mean the Labour Party agreed with the Conservatives’ plan.

You’ve lost another member of your shadow cabinet, Clive Lewis, and people are saying this is a sign of how bad the situation is within the Labour Party and specifically for you as leader. It’s a disaster for you, isn’t it?

No, it’s not a disaster. Look, the majority of Labour MPs voted to trigger Article 50, and 50-odd voted against it, mainly on the basis of their strong message from their own constituents. My argument is it was a national vote, a national referendum, and parliament has to respect that.

Well, there’s a story going about that you’ve set a date for when you’re going to quit as Labour leader.

But as previously reported by The Canary:

A rumour emerged on 7 February that another Labour leadership challenge against Jeremy Corbyn was coming. Later in the day, the rumour was that Corbyn would voluntarily step down. The rumour was picked up on 8 February by outlets like The Express and The Daily Mail. It has since been denied by one Labour source who described it as “sh*t-stirring bol**cks”. It has also been denied by Jeremy Corbyn’s own office.

Despite the confirmation the rumour was untrue, the BBC questioned Corbyn again over the allegations. Corbyn responded to Stayt [5:18]:

That’s in the ‘I made it up yesterday’ dot com

Is there absolutely no truth in that?

Stayt continued to press Corbyn on the issue, and asked him whether he as leader “is damaging the party’s chance”. Corbyn responded [5:31]:

Look, I’m really surprised the BBC is reporting fake news. There is no news. Listen. I was elected leader of this party. I’m very proud to lead this party. We will go through this process demanding from the government social justice in Britain. Setting out our economic plans for an investment led economy. Opposing this government on the crisis in social care and the health service. Demanding real action on the housing crisis taking place all over this country. That is our agenda, that is what we unite on, and that is what I’m doing.

By dragging up a rumour regarding his resignation, it seems the BBC was again clutching at straws to try to sully Corbyn’s name.